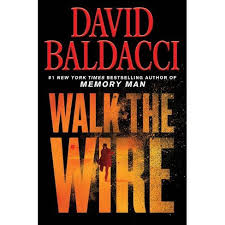 Ever since stumbling on Total Control by David Baldacci, I have been a huge fan of his work.  Reading most of his suspense/thriller novels, which mostly center around government or corporate corruption.  Amos Decker dubbed The Memory Man, due to the fact he is afflicted with Hyperthymesia (The ability to retain all memory, down to the smallest of details), and Synesthesia, (A condition that makes people see things such as numbers in letters as colors) while sustained in the NFL.  These conditions make Decker is extremely gifted at his job.  It all comes crashing down when his wife and daughter are murdered.  Resigned from the police force, and homeless, Decker becomes a private investigator.  After a man turns himself in for his family’s murders, he is called back in the help with the investigation.    Which due to his success brings him to the attention of the FBI, where he is offered a chance to come on board a special group as a consultant.

Which brings us to Walk The Wire.  The latest in the now 6 part series,  a gruesome murder takes place in London, North Dakota, an oil town currently booming due to fracking.  Amos Decker and partner Alex Jamison are called in solve the case.  Very little details are known about the victim, other than she was a teacher for a group of Anabaptists called The Brothers.  Was the murder the work of a serial killer?  Does it have anything to do with the Top Secret Air Force radar installation next door?

As clues and bodies start piling up, and attempts on Deckers life are made, another pair from David Baldacci’s cast of characters makes an appearance, and an international conspiracy with far reaching economic implications is discovered.  Will it be stopped in time?  How does it tie in with the original murders?

Pick up David Baldacci’s latest novel and find out!

Thank you for taking the time to read my latest blog!  Be sure to come back next week for more great content.  If you wish to be notified by email when a new blog is posted consider registering by clicking HERE.