↓
Home→Technical→Technical Book Review: Back into the Storm: A Design Engineer’s Story of Commodore Computers in the 1980’s

Technical Book Review:   Back into the Storm: A Design Engineer’s Story of Commodore Computers in the 1980s – A book by Bil Herd ex Commodore Hardware Engineer. 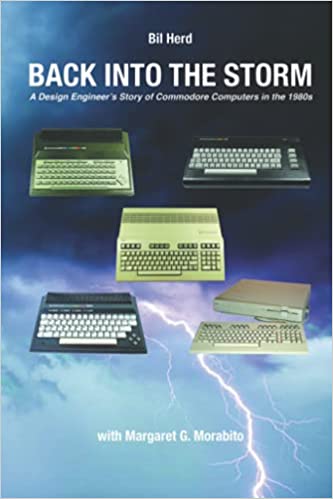 They say the victors write the history, this is nowhere more true than the cutthroat world of home er…. personal computers.  Commodore Business Machines or CBM was one of, if not the largest makers of home computers in the 80s and early 90s.  Designing and manufacturing several of the top selling computers at the some such as the Commodore PET and Commodore 64, but also developing the CPU and chips that gave them some of the best graphics and sound and kept them affordable.

It has always pained me that most documentaries of the Home Computer war focus only on Apple, IBM, and Microsoft (Pirates Of Silicone Valley), (jobs), ETC.  With little or no mention about Commodore, and it’s role and impact in the market at the time.  There are some good books out there that detail the rise, and spectacular fall into Bankruptcy of Commodore Business Machines, such as Brian Bagnall’s On The Edge, The Spectacular Rise And Fall Of Commodore.” Which documents the very beginnings of MOSTek and Commodore through their bankruptcy in 1994.  It is a great read for anyone interested in the complete history of Commodore.

Back Into The Storm, is a more personal story, written by none other than Bil Herd, the young and driven hardware engineer that brought the world the TED machines (Commodore 16, and Plus/4) but the successful Commodore 128 as well.

The Commodore 128 hold a special place in my heart as I owned not only the coveted 128DCR (With built in 1571 mechanism), but the flat 128 as well.  The flat 128 ran the original iteration of The Rat’s Den BBS with a 20MB Lt. Kernel Hard Drive.  It was a great computer and the things I learned from running the BBS, and supporting my users was invaluable to my eventual career in IT.

While other texts document the story of the design of the 128 with all of the issues one might expect of developing a multiprocessor, multi OS computer such as the 128 (the computer contained the Commodore 8502 CPU and the ZIlog “Z80” CPU for CP/M compatibility”, but also boasted full C=64 compatibility.  Many of these challenges in and of themselves would be reason enough for most mortals to run to the hills screaming in fear, but the Bill and his team also had to do battle with Commodore’s notoriously hostile, and at sometimes utterly inept management.   Through trial and error, brutal week-long work marathons, and battle with friend and foe alike.  Succeed they did, producing what was probably to be one of the last 8 bit machines on the market, and selling 6 – 8 million units.  The Commodore 128!

The material being covered in Back Into The Storm has been covered in other texts and you can see Bil Herd tell the story from numerous videos of lectures he has done.  Should this deter you from buying this book?  Absolutely NOT!  While it is certainly an experience listening to Bil talk, Back into the Storm will put you inside the actual halls of Commodore! Something no lecture can do!  You will feel like you are right there in hardware lab with the 128 Animals racing to make the impossible deadline of getting your product to the 1985 CES in Las Vegas.

I highly recommend this book.  Once I started reading it, I was unable to put it down.  It brought back a lot of good memories about using Commodore products from my very first computer, the Commodore Vic-20, 64, and the Commodore 128.  If you think listening to someone reminiscing about their days as a hardware engineer for a long lost company would be tedious or boring.  Think again!  You will be surprised how fast the pages turn, and wish there was more!

Back into the Storm: A Design Engineer’s Story of Commodore Computers in the 1980s, can be purchased in both Kindle and Paperback form on Amazon.

NOTE: Brent’s World is NOT monetized in any way, I do not make money on the use of links from this site.

Thank you for visiting Brent’s World, pleas be sure to stop by next week for more great content.  If you wish to be notified by e-mail when a new blog is posted.  Click HERE!