Yes, you really can find almost anything in the Itaewon district in Seoul.   Earlier in the week when going out for Chinese food, I stumbled upon this little restaurant.   Knowing that I was going to find myself in Itaewon later the following week to get money changed in order to pay rent I made a mental note of the location and vowed to return.

For those of you who are not familiar with Itaewon, it is known to Koreans as “Western Town”, analogous with China Town in San Francisco, or Korea Town in Los Angeles. This makes it popular for expats who need a little fix of home, or for Koreans who want to try food not available elsewhere in Korea.

It also has it’s shadier side further back from the main street, which is Seoul’s main red light district. Full of brothels, juicy bars, massage parlors, and other places of ill repute. This section of Itaewon is known affectionately as Hooker Hill.

One of the staples of life in California is it’s plentiful supply of Mexican food and Tex Mex fast food. Something I surely miss here in Korea. So when I saw a new Mexican place, I knew I had to go! TomaTilla, opened it’s first restaurant in Korea in 2008, and it’s Itaewon location in 2011. The building from the outside is rather nondescript, I would have walked right on by if it wasn’t for the A-Frame sign outside. Inside was small and cramped, and setup similar to a Mexican fast food resturant in the states. You walk up, order from the menu on the wall, and receive your meal on a tray.   Hmm not quite what I had in mind, as I was looking for more of a sit down experience. 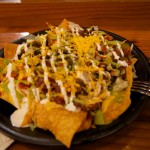 I ordered a Steak Burrito with the HOT sauce (You have a choice of Hot and Mild), and a Steak Nacho Plate to share with Mi Jung. Mi Jung ordered the enchiladas. I was really happy with the Steak Nacho’s. Comparing with the nachos from the other Mexican restaurant I have visited in Seoul, who’s version of Nachos was basically the free bowl of chips and salsa you get in the states (except here you have to pay for them). The serving size was great! The taste was excellent, the portions of toppings was perfect so one ingredient didn’t overpower the other. I also enjoyed the burrito. While it is very difficult to do a bad burrito, it is very easy to make a bland mediocre one! This was definitely not the case here! I savored every bite! I did not thing the hot sauce was that spicy, but since I live for spicy food I am a poor judge in this realm. Mi Jung tried a bite and said her mouth was on fire, so I’ll say the hot 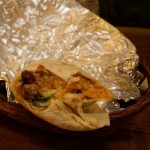 sauce was excellent too! I did not get a chance to try more than a bite of Mi Jung’s Enchilada. The bite I had however was nothing to write home about.  I would definitely say It needs more sauce. As you can see it looks like the enchiladas were just laid in the green sauce on the plate, and not baked in the sauce, The flavor was pretty bland. The beans and rice the accompanied the enchiladas on the other hand were good, and fit the meal perfectly.

I enjoyed the experience, and the quality and portions of the food was excellent. will be returning to try the other items on their menu.

Directions: Seoul Metro line 6 – Itaewon station, way out #1, Go straight past KFC, make the next right. Walk up the alley and make another right behind the Hamilton hotel. Continue walking and you will see TomaTilla’s on the left.