Out And About In Korea

In 1996 on September 15th, North Korean commandoes in a Sang-O class submarine with a crew of 26 ( 23 Crew and a 3 person commando team) landed on the east coast of South Korea 20 km south-east of Gangneung, in Ganwan-do province.  The commandos mission was to spy on the naval installations in the area.  However during the recovery attempt on September 17th something went wrong and they had to attempt a second recovery the following day and ended up running aground and were unable to refloat the stricken submarine.  The crew made the decision to abandon ship after destroying sensitive documents and equipment and make for the DMZ roughly 80 km to away.

They did not make it far before they were spotted by an alert civilian who notified authorities and a 16 day manhunt ensued.  Which resulted in the death of all of the submarine crew except one who was captured.  12 ROK soldiers and one South Korean citizen lost their life in the incident. The submarine was captured and put on display at Unification Park in Gangneung.Reference (Wikipedia) : https://en.wikipedia.org/wiki/1996_Gangneung_submarine_infiltration_incident

It was easy to get to the Gangneung bus terminal from Sokcho, and the taxi stand is located right outside. Supposedly there is a bus that runs once and hour from here as well.  The taxi fare was about 10,000w each way.   There are 2 different areas, and the price is 3,000 for both.  The first area is a wide open park that has some static ROKAF (Republic of Korea Air Force) displays and a display of the original South Korean Presidential Aircraft, a Douglas C-47 Sky train.

I like static displays and monuments, as it gives you an opportunity to practice framing with various lenses and aperture settings.  I took quite a bit of time taking photographs of this statue.  Which symbolized both North and South Korean soldiers and a South Korean civilian. 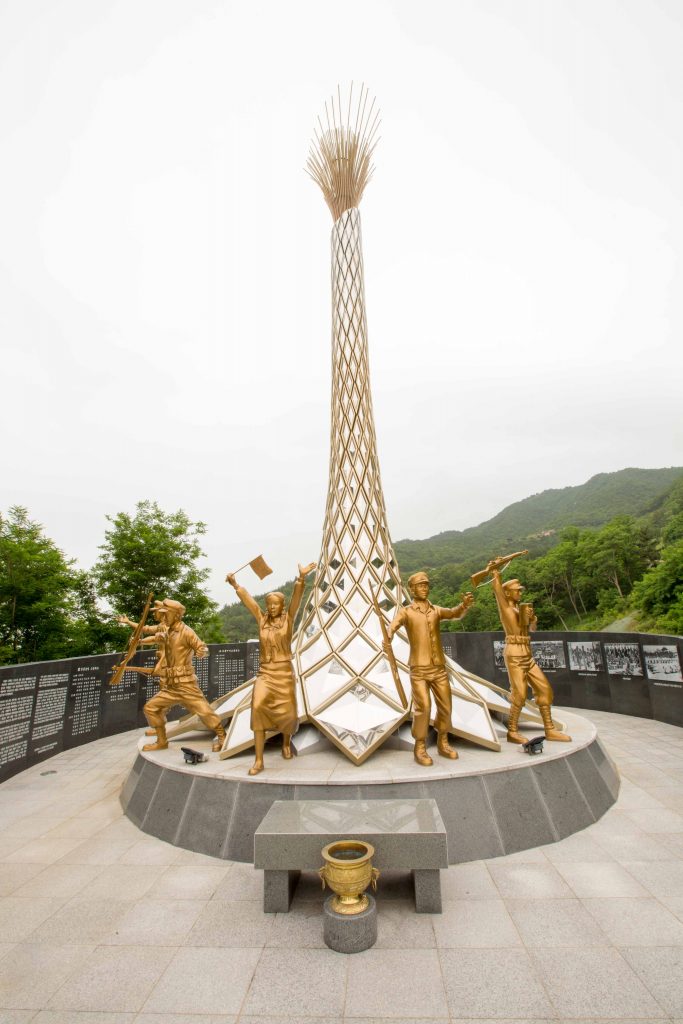 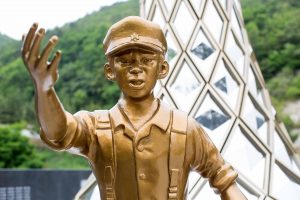 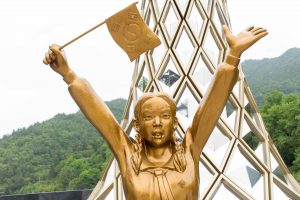 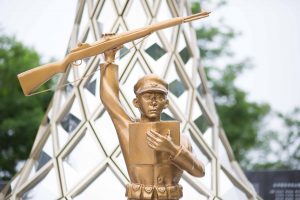 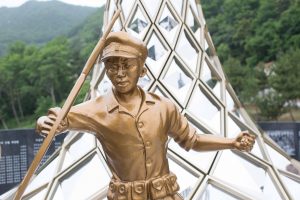 An F-86 Sabre used by the Republic Of Korean Air Force on static display. 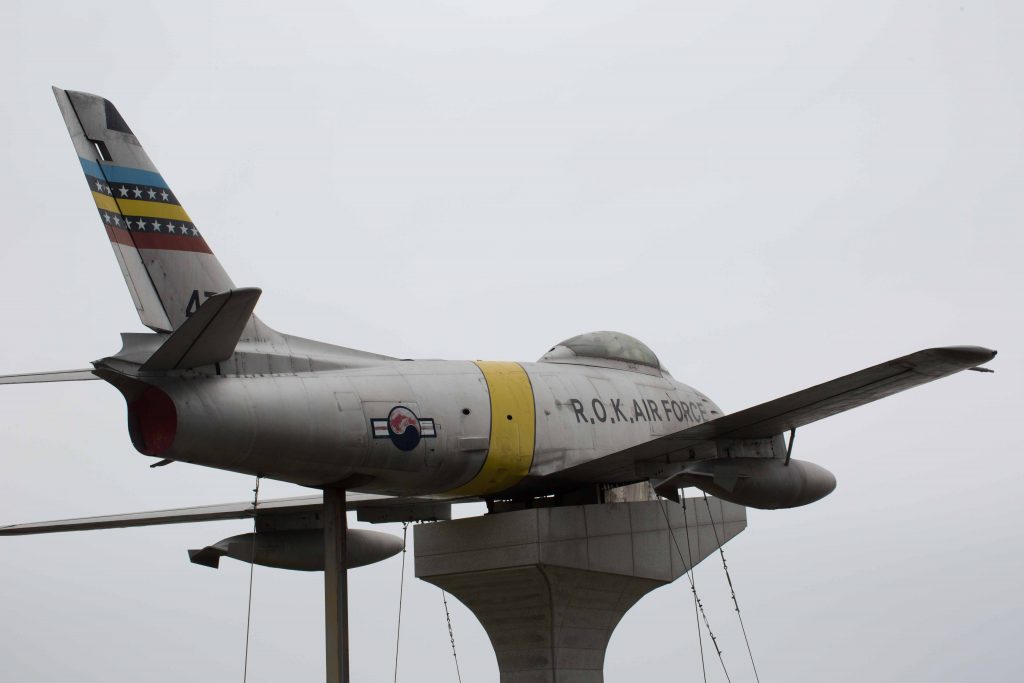 I am going to have to hang my head in shame here a little bit, and admit that I need to get more practice taking pictures of aircraft. I cannot believe that I did not get at least one complete picture of this ROKAF F-4D head on.  It just goes to show you, that we all have pictures that we wonder why we could not have done a better job. 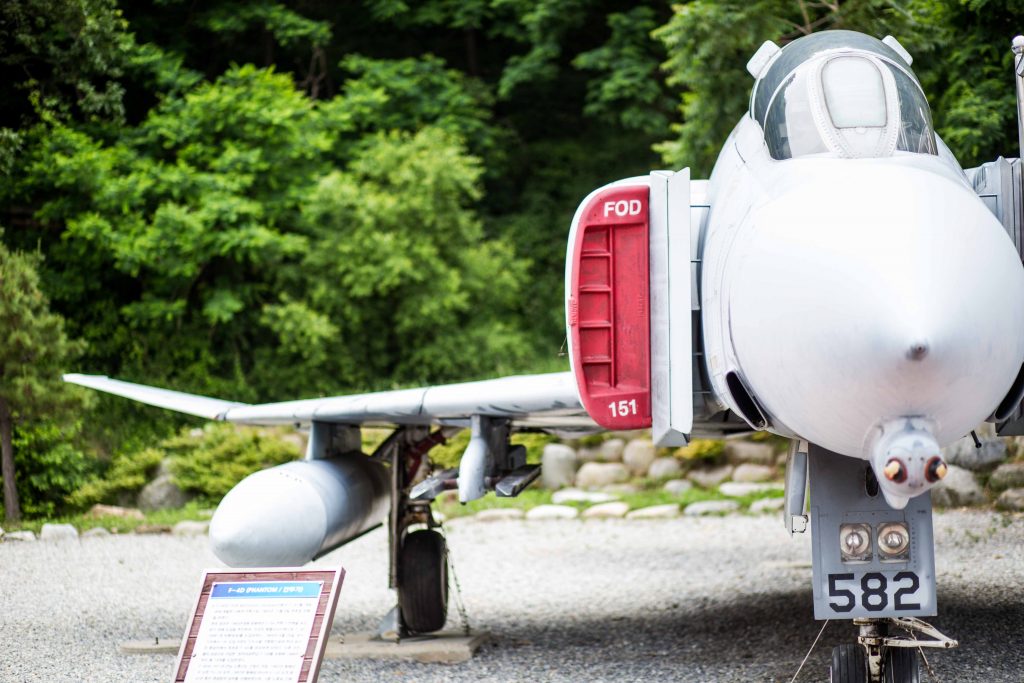 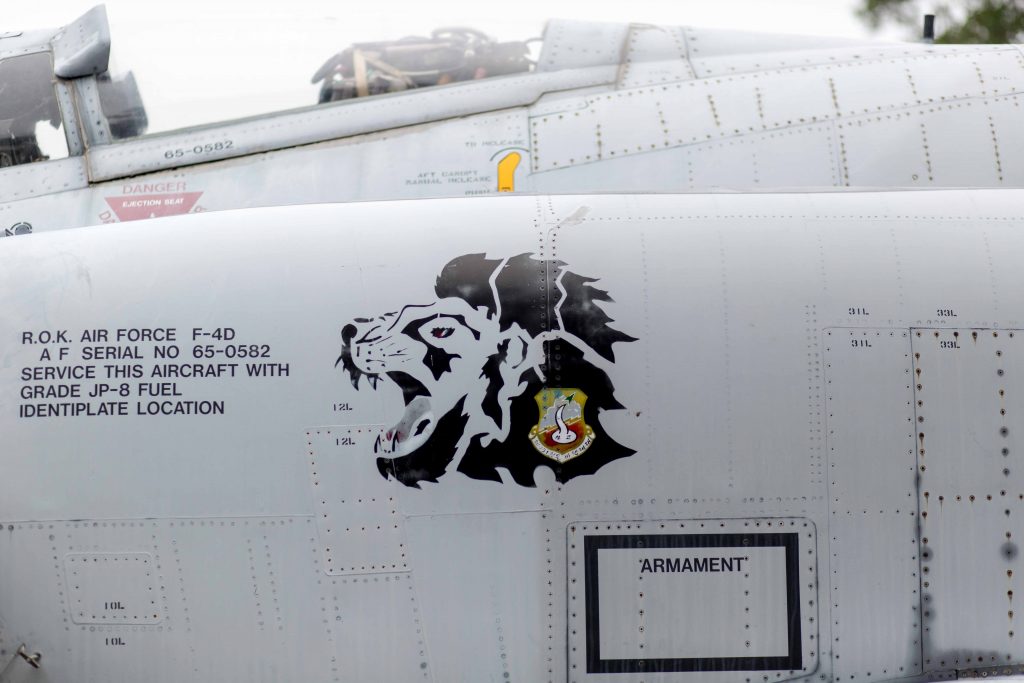 A couple more static aircraft displays with the flags of the 17countries (Plus the United Nations) fighting for the Republic Of Korea during the Korean War.

There is a memorial for the sacrifice and vigilance of the Korean Navy. 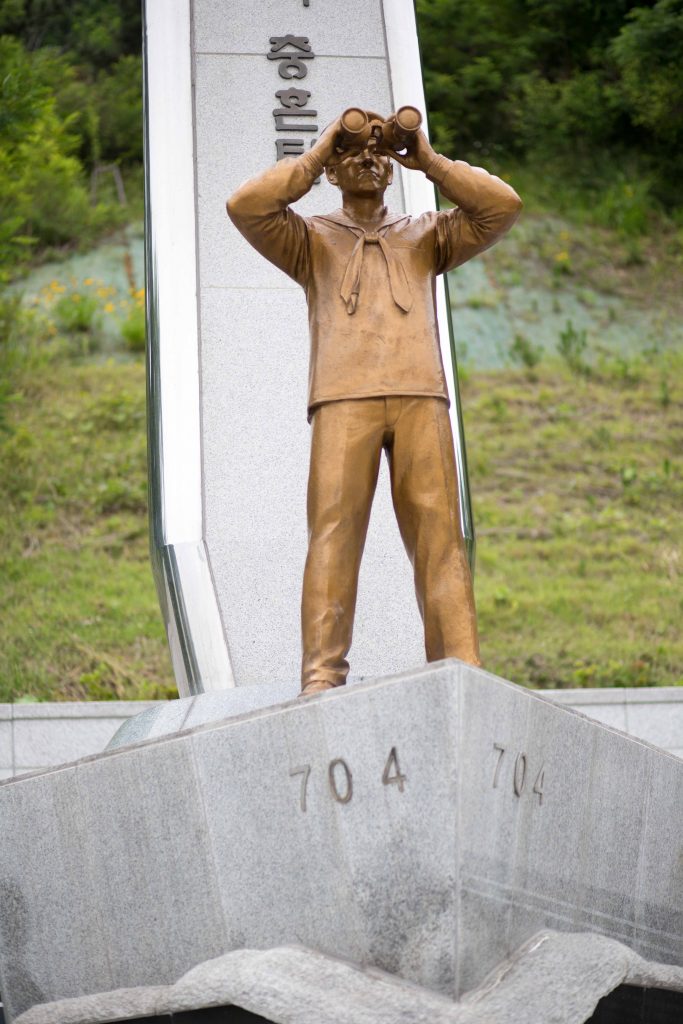 Above us is a C-47 Skytrain that was used as the Presidential Airplane. 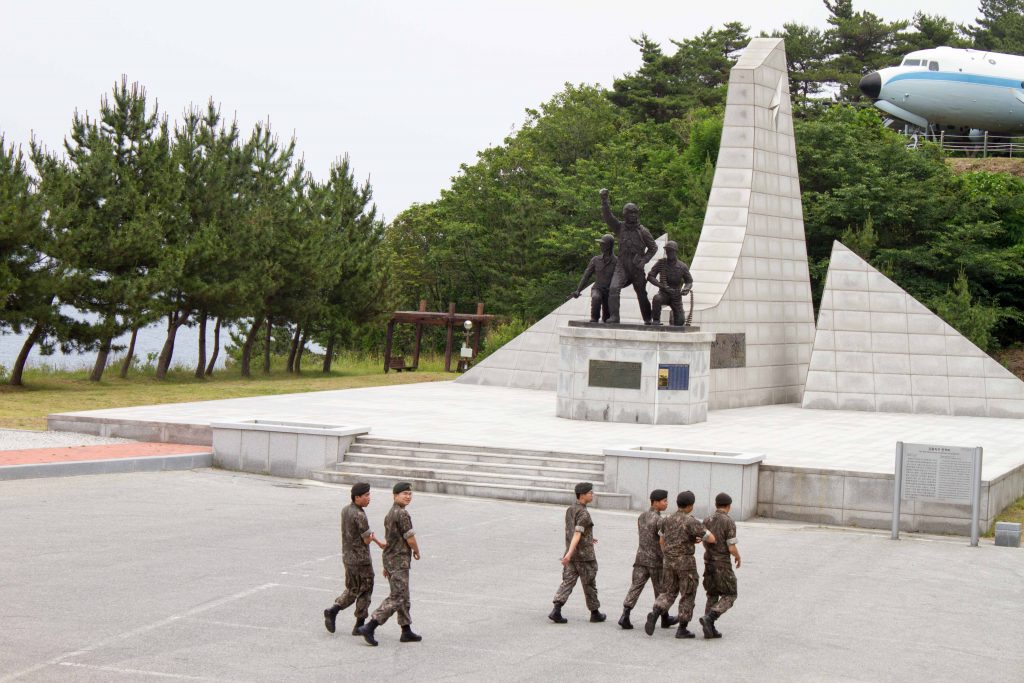 You are allowed to go inside the static display of the C-47 Sky Train, so here is Mi Jung hamming it up for you! 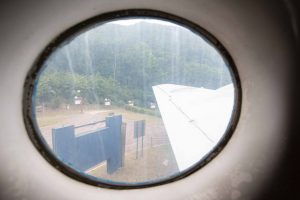 We finished up at the upper part of the museum and headed down to the lower exhibits, it ended up being a 20 minute walk, which was not so bad because it was downhill, but it was a little hard on Mi Jungs bad knee.  Like a trooper though she held on and soon we got our first glimpse of a North Korea submarine.

The submarine looks big on the outside, but looks are deceiving as it is very very cramped on the inside!  Noticeably lacking were any type of crew accommodations, it was just packed with equipment.  Speaking of equipment, it was obvious the submarine was stripped of any useful electronic equipment, such as navigation or communication equipment.  In its place were items taken from a dump. 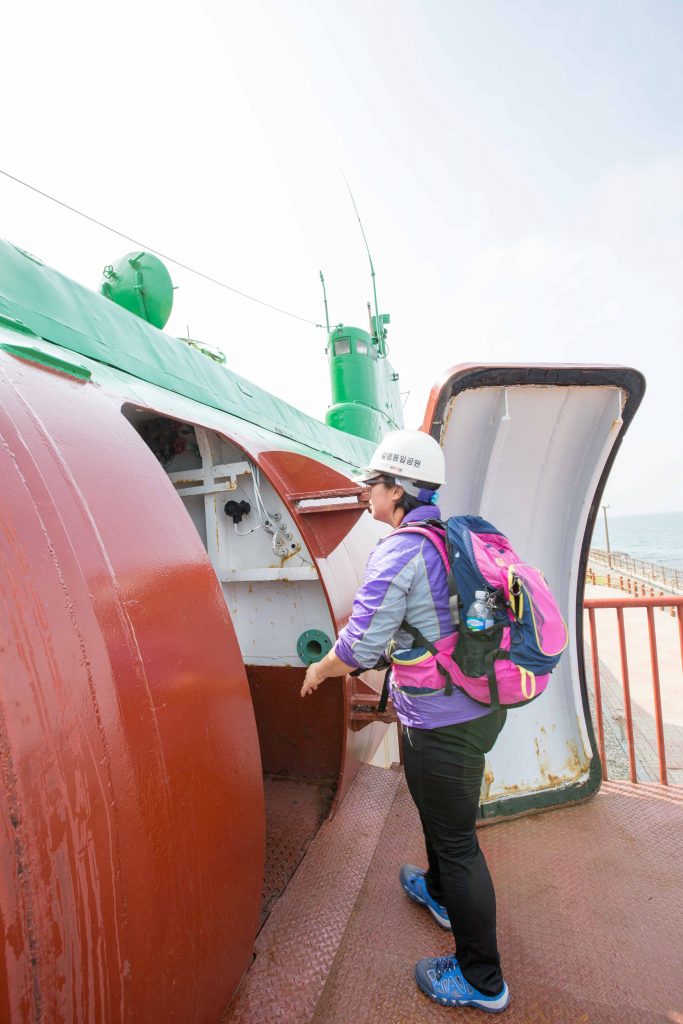 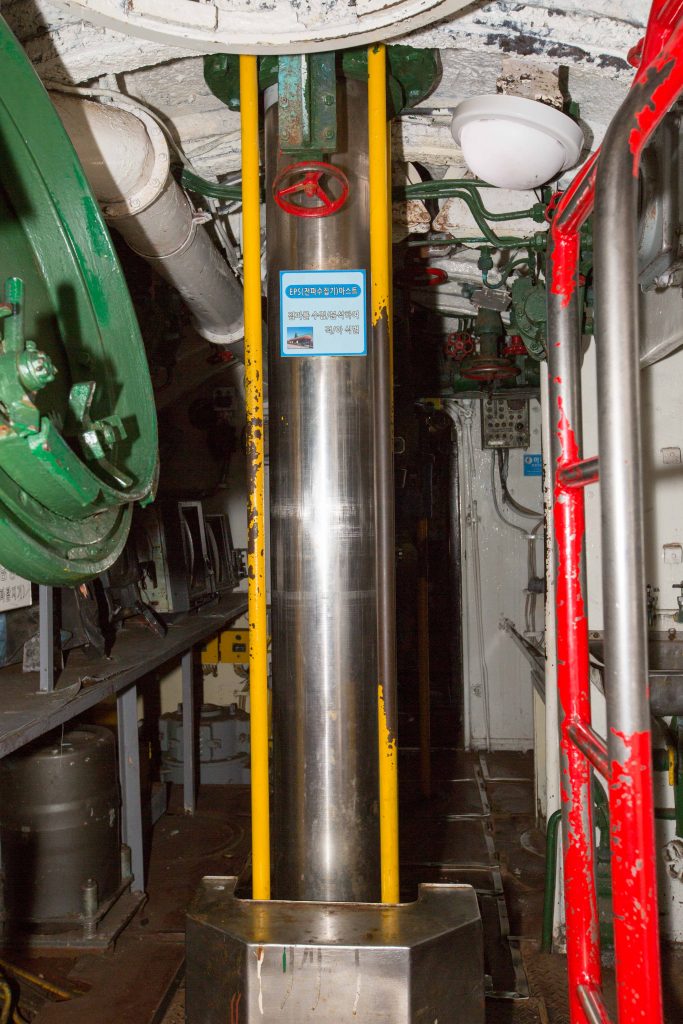 Here we see some old marine radar displays, and some same ham radio equipment (Specifically a linear amplifier and an auto tuner.) 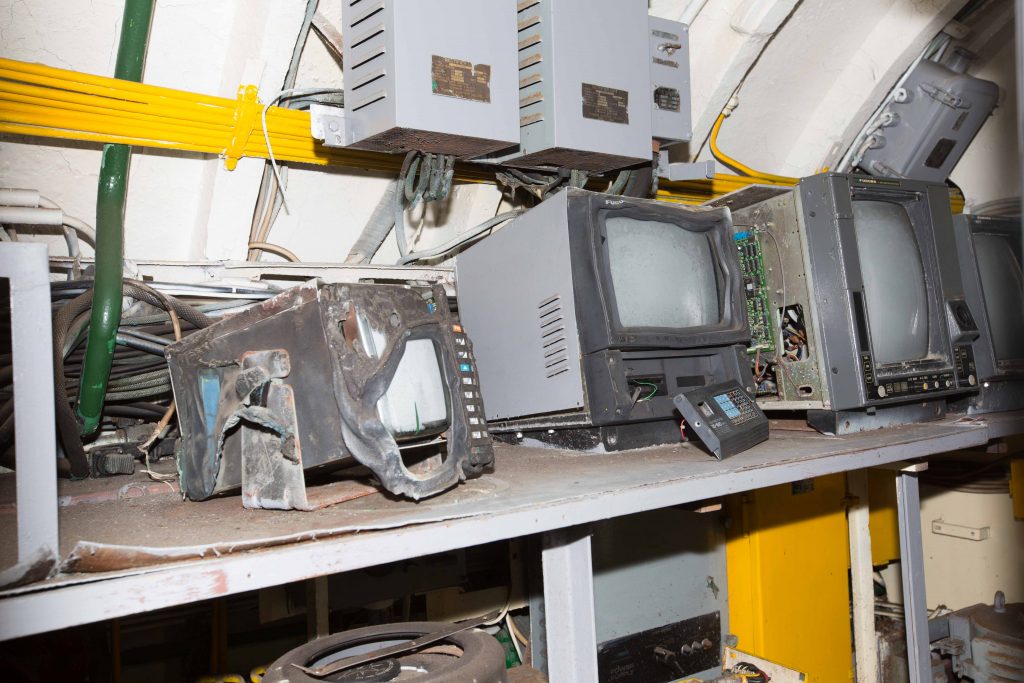 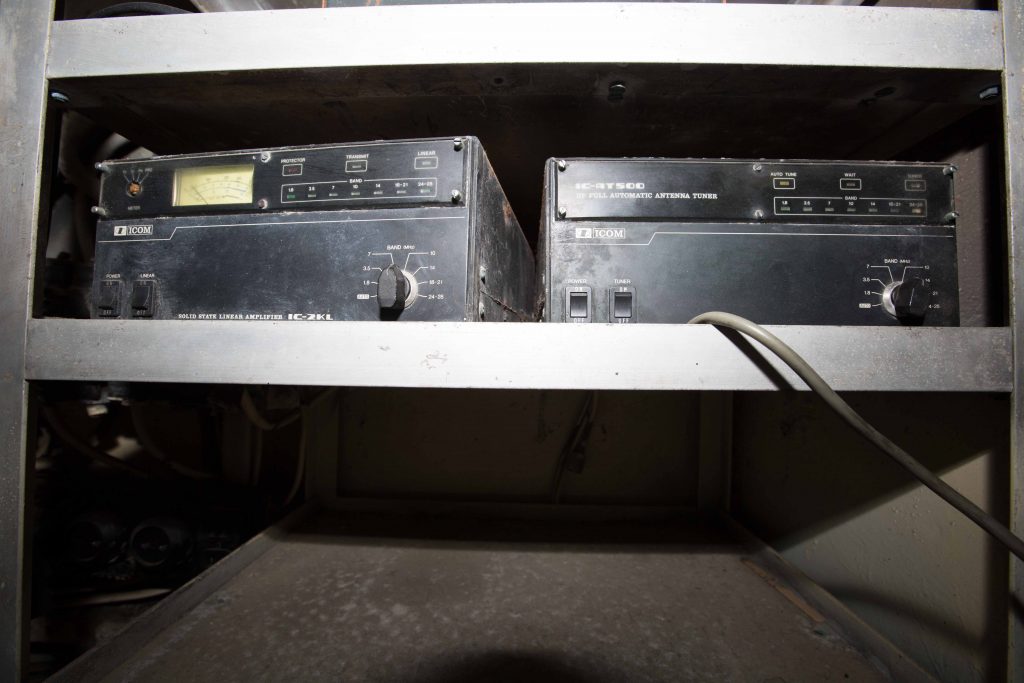 Some of the submarine ballast controls, and what looks to be a Furuno auto pilot and a time lapse VCR for CCD cameras. 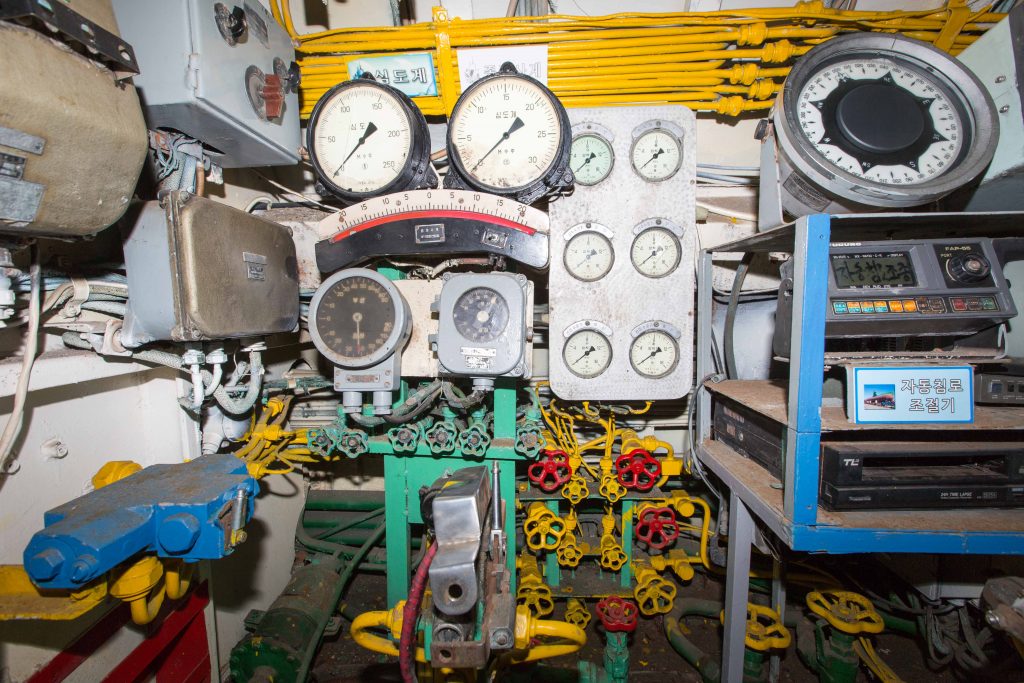 Finally we come to the engineering spaces. I could not imagine spending even several hours on board this submarine, let alone a few days.  I was constantly wondering were anyone slept. 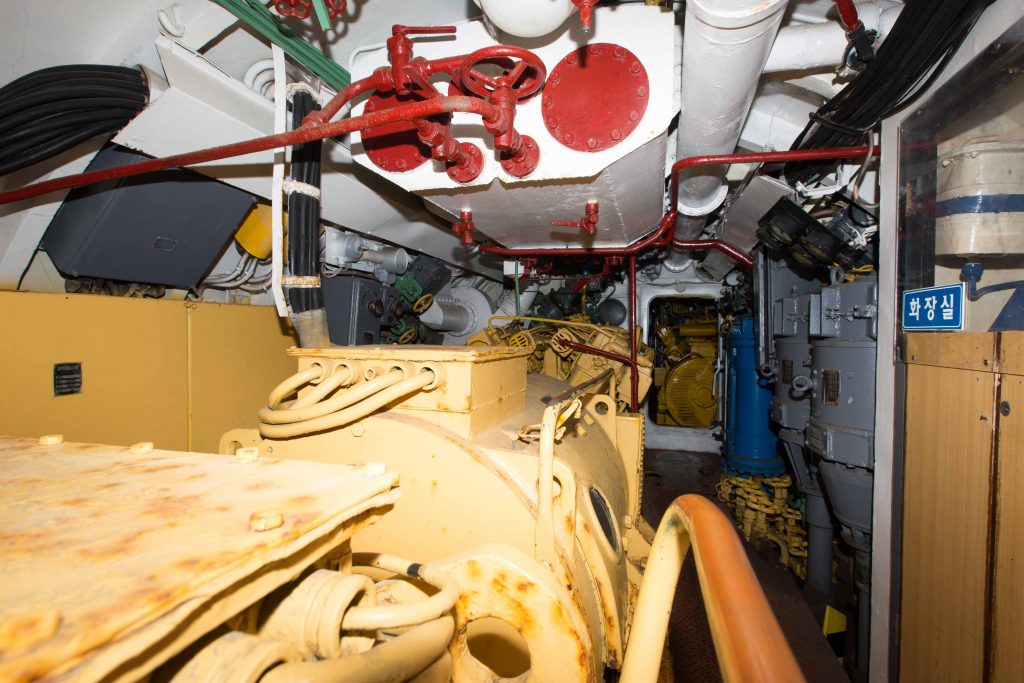 Here are close up pictures of the damage sustained when the submarine ran aground. 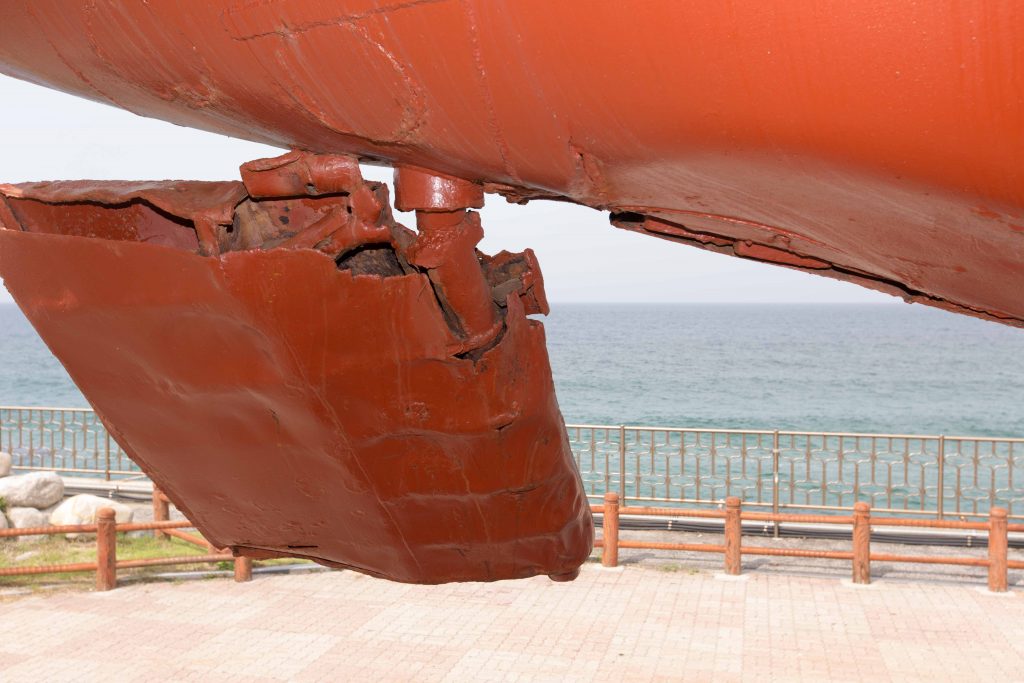 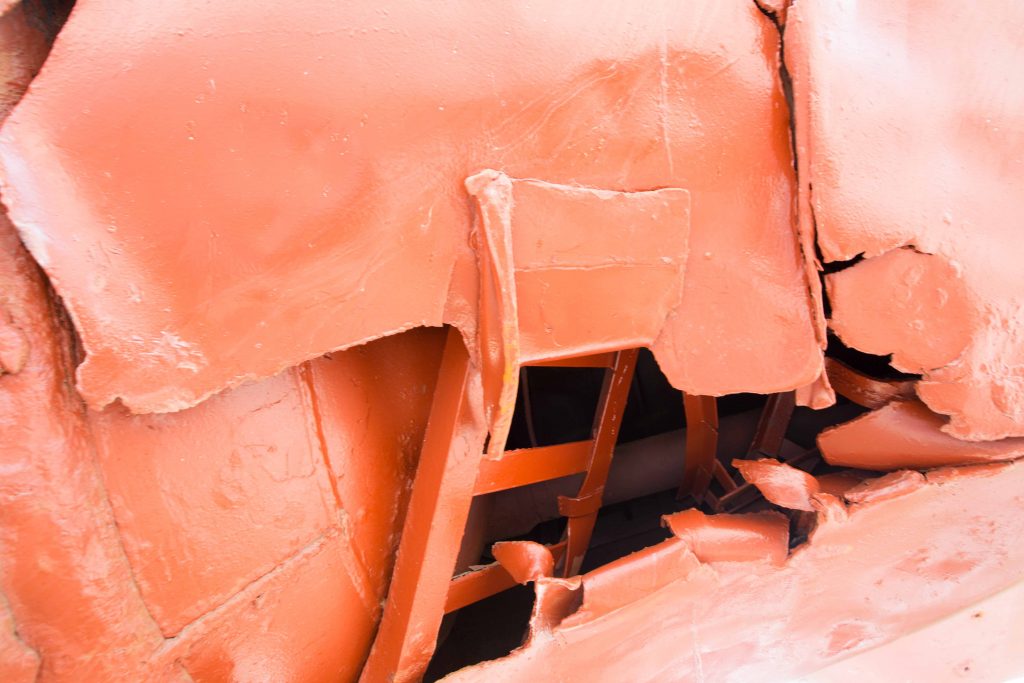 While I was in the submarine, Mi Jung explored this war ship, donated to the South Korean Navy in 1972 after seeing action in WWII and Viet Nam. It was decommissioned and put on display in 1999.  I have to thank Mi Jung here, as I got so fixated on the submarine that I did not even think of getting good pictures of the warship from the ground.

I did get some pictures while exploring the ship however, Here are the port side torpedo launchers. 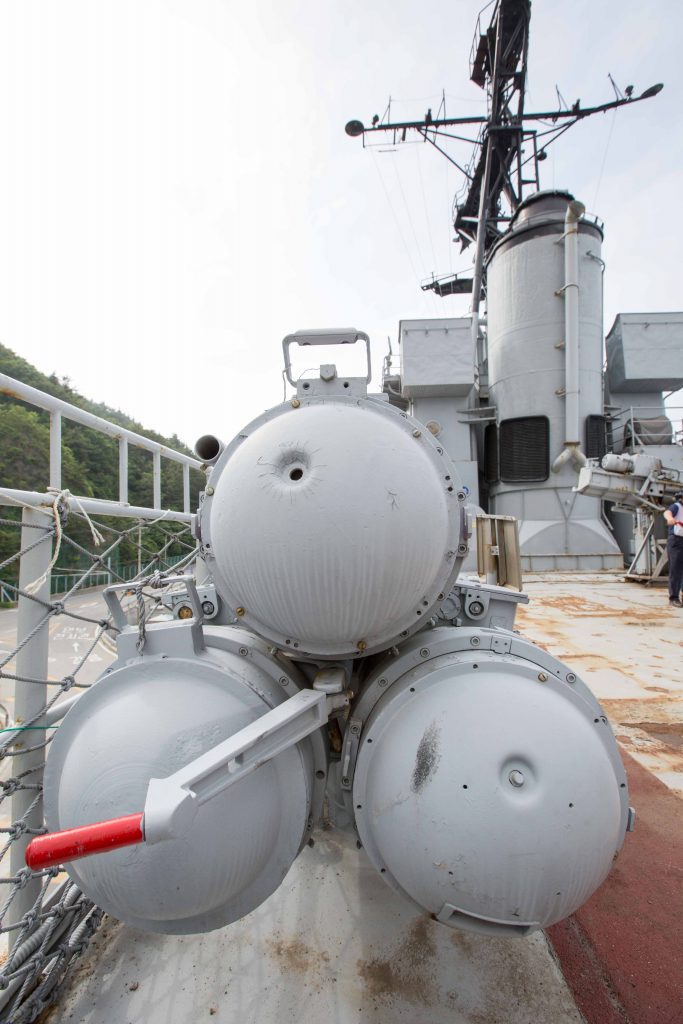 The Bow mounted Anti Aircraft guns, which I wasted to time setting up a tripod and climbing up for a selfie. 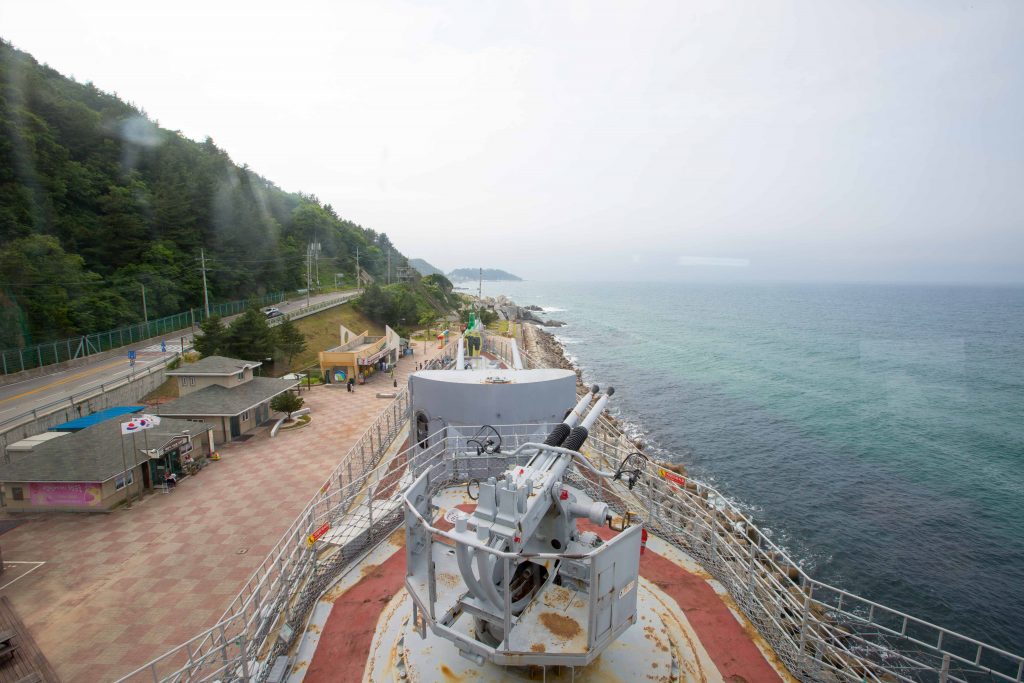 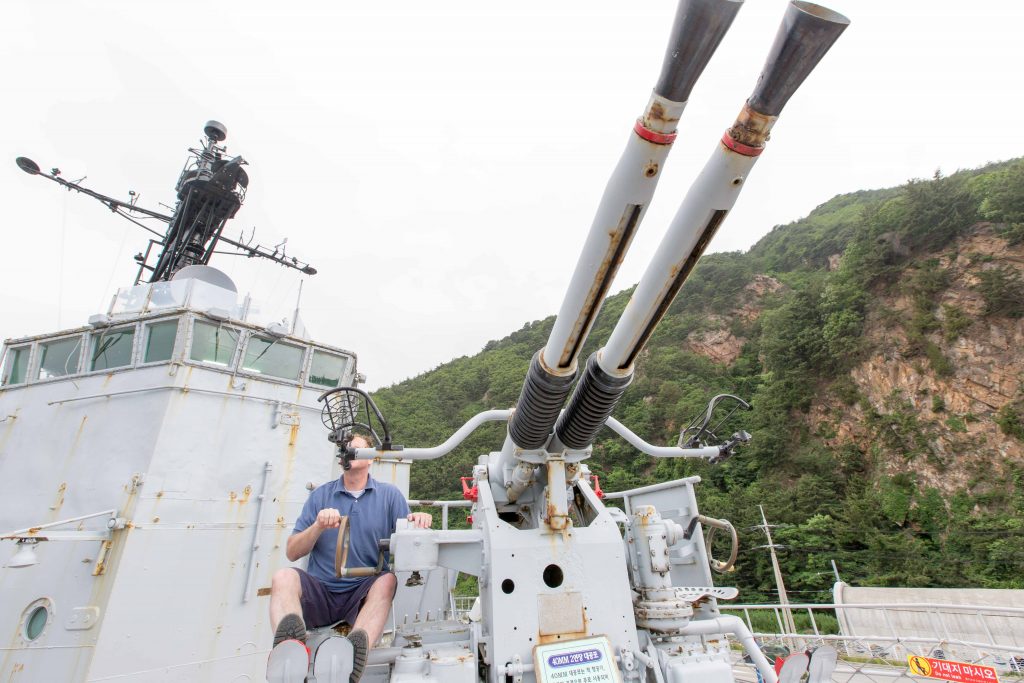 Here are the large 5/38” foredeck guns, and the massive anchor. 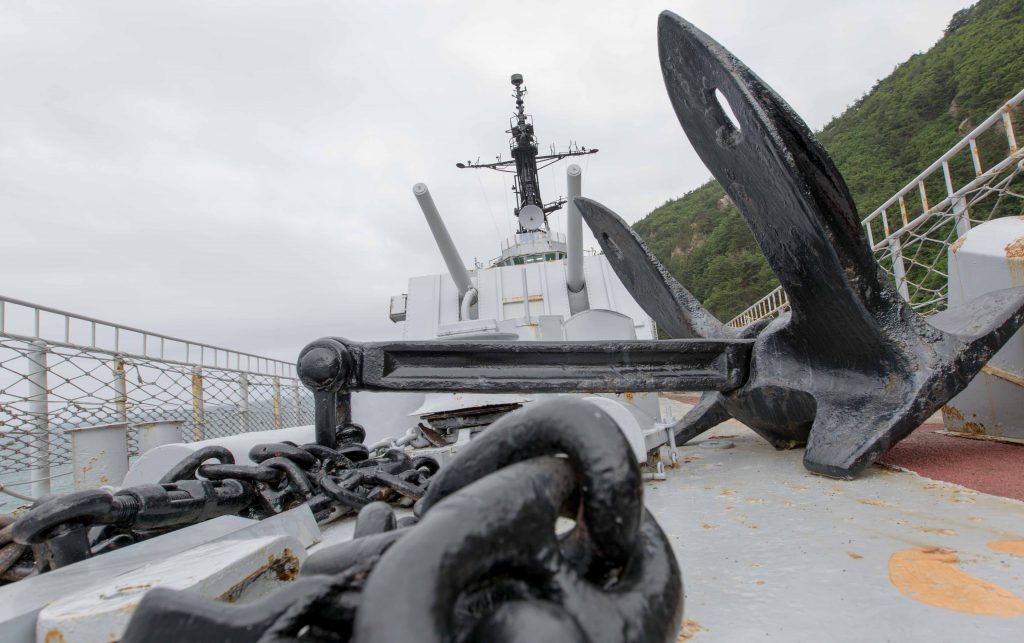 After thoroughly exploring the ship, it was time to head back to the pension for another great night of BBQing!

How To Get To Tongil Unification Park

From Sokcho Bus Terminal take a bus to Gangneung. There are many buses throughout the day, with a travel time of about 1 hr and 10 minutes.  Once you get to the express bus terminal you get a taxi for about 7,000w.  If you are just going to see the submarine you can ask to be let off at the lower exhibit.  If you want to see both exhibits I recommend getting off at the upper area, the walk to the lower exhibit takes about 30 minutes and is easier to do downhill.

Please come back next week for another trip to The Scariest Place On Earth, as we travel to the eastern end of the Korean DMZ and the wonderful museum at Tongil Security Park.

In case you missed it, Mi Jung and I go sailing in Sokcho!  You can read the article by clicking HERE!