During a conversation about Mexican Food in Korea, one of my coworkers mentioned there was an On The Boarder restaurant in Seoul and heard it was pretty good. Having never been to an On The Boarder restaurant before I was intrigued and began doing some research on the internet and discovered that not only did the Korean franchise receive high ratings, people were saying that even though they had bad experiences at the restaurant’s in the states they rated their Korean experiences favorably.

This of course meant that it instantly became a prime interest for a Brent’s World Blog Article!  So off Mi Jung and I  went to Itaewon, in search of more Mexican food in Seoul!  If you are interested in our other South Of The Boarder dining experiences, you might also want to check out our reviews on TomaTillo, Taco Chili Chili, and Gusto Taco.

The restaurant was easy to find, simply take the Seoul Metro line #6 train bound for Itaewon and exit Way Out #2 (By Hamilton Hotel). Continue going straight down the street, and you will see On The Boarder on your right, on the second story.  On entering the restaurant, you will be greeted by their mascot, which looks suspiciously like a large LEGO. 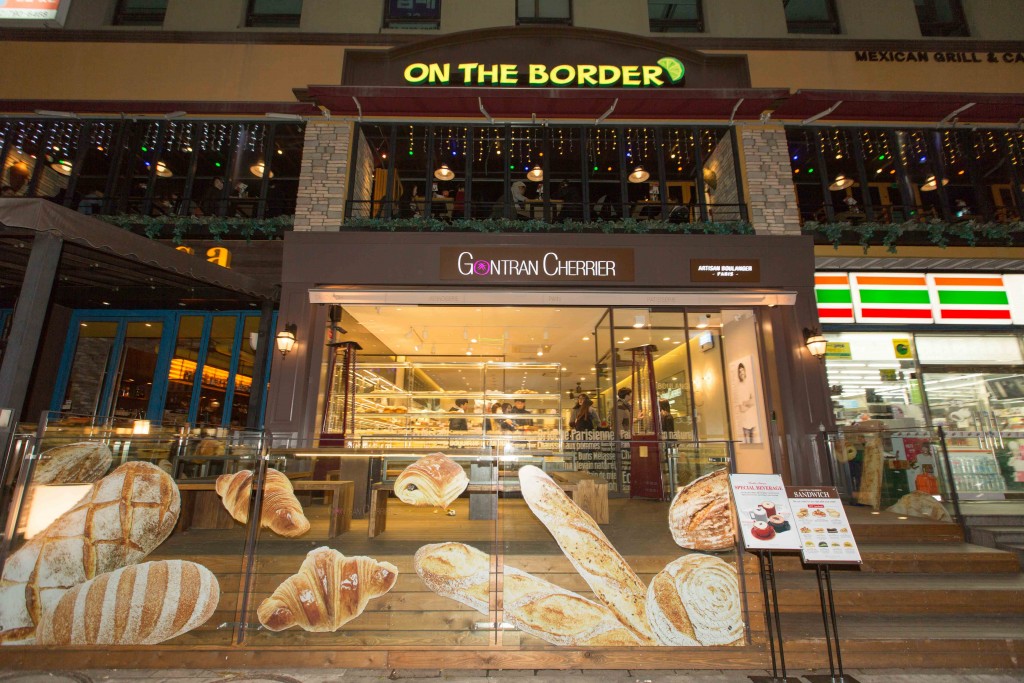 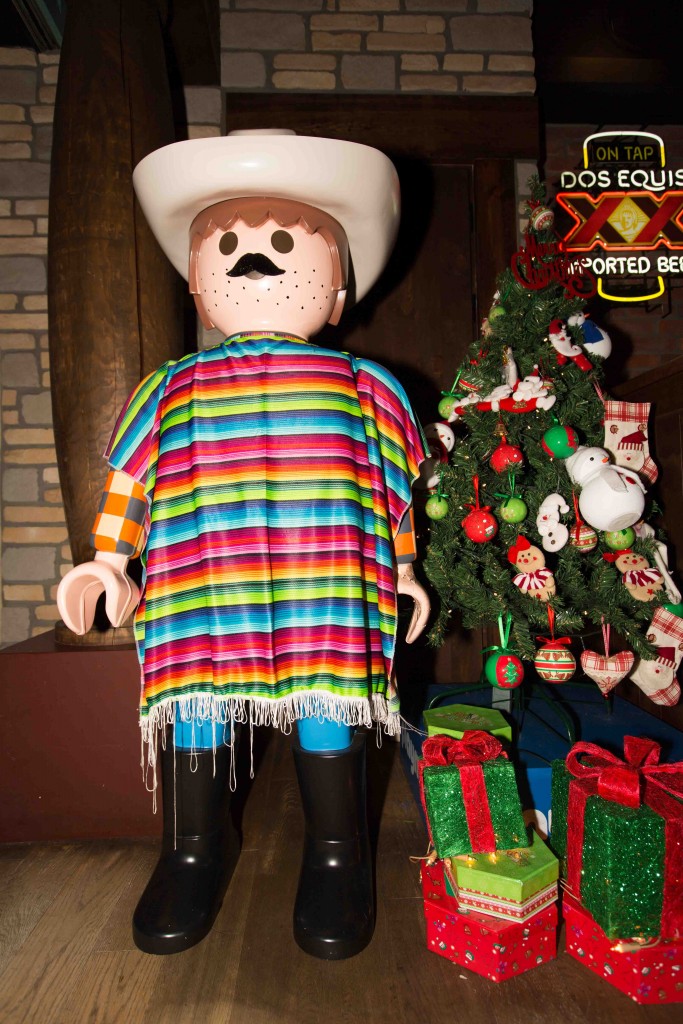 The first time we went, the restaurant was relatively crowded and we had to wait about 10 minutes to get a table, we asked if we could sit at the bar and have a drink while we waited. We were told that we could.  However, the entire time that we were seated at the bar we were never approached for a drink order.

Once we were seated, we were presented with the traditional chips and salsa, one of my biggest complaints about torilla and corn chips in Korea, is that you basically will always get chips on par with Tostios, which is the one brand that I really dislike. I was pleasantly surprised to discover that On the Boarder served their own chips!  Which after tasting proclaimed them to be the best tortilla chips in Korea! 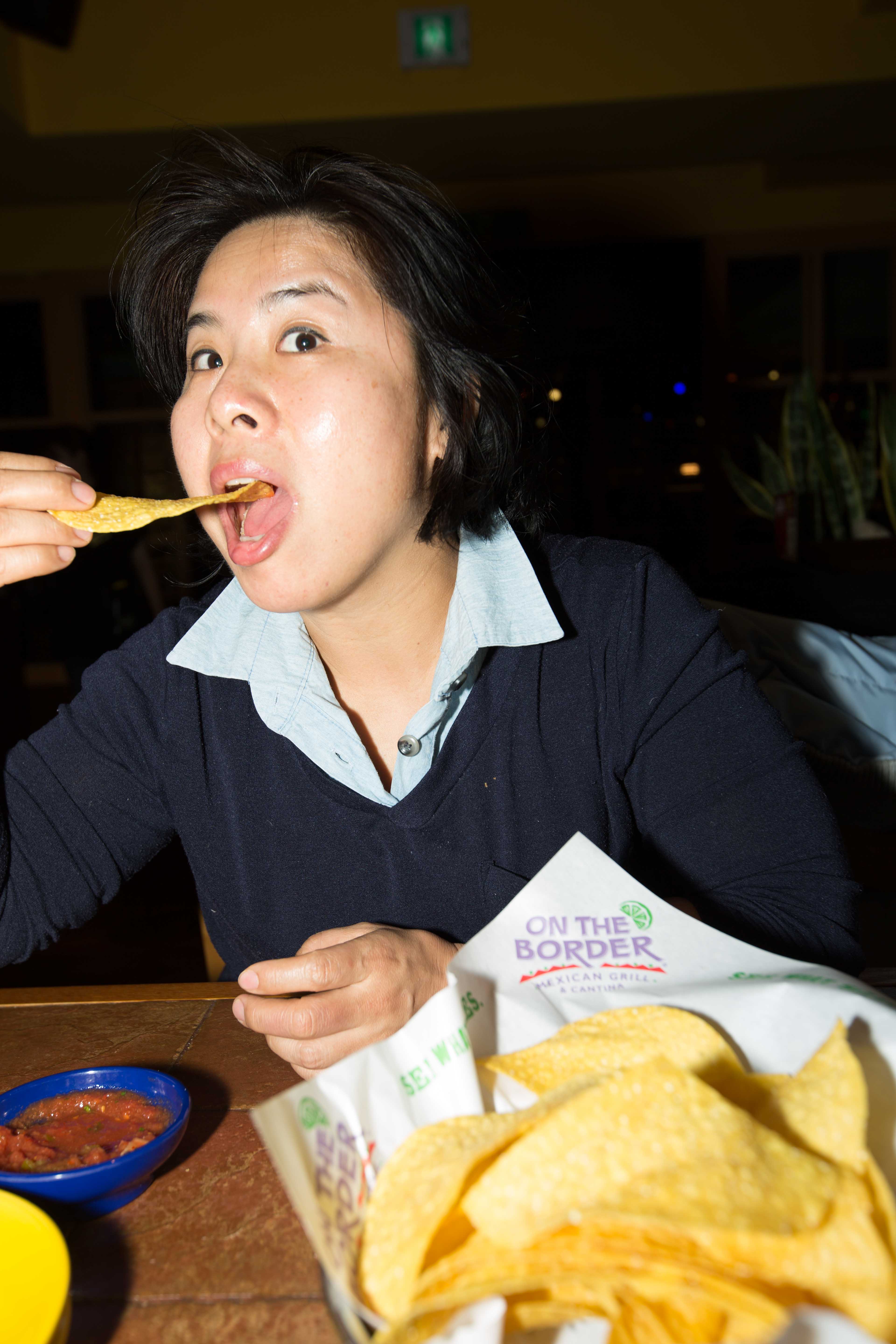 Parched after a long day at work, or playing tourist? A schooner of CASS might be just what you need, they also have a large selection of margaritas to choose from, so don’t forget to check out their drink menu. 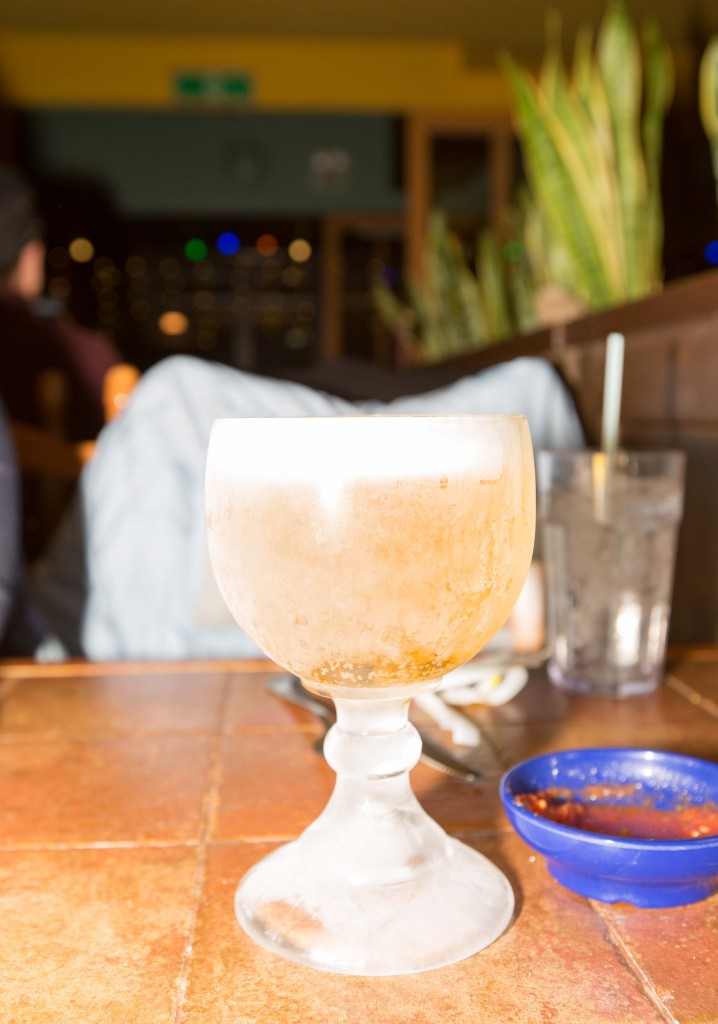 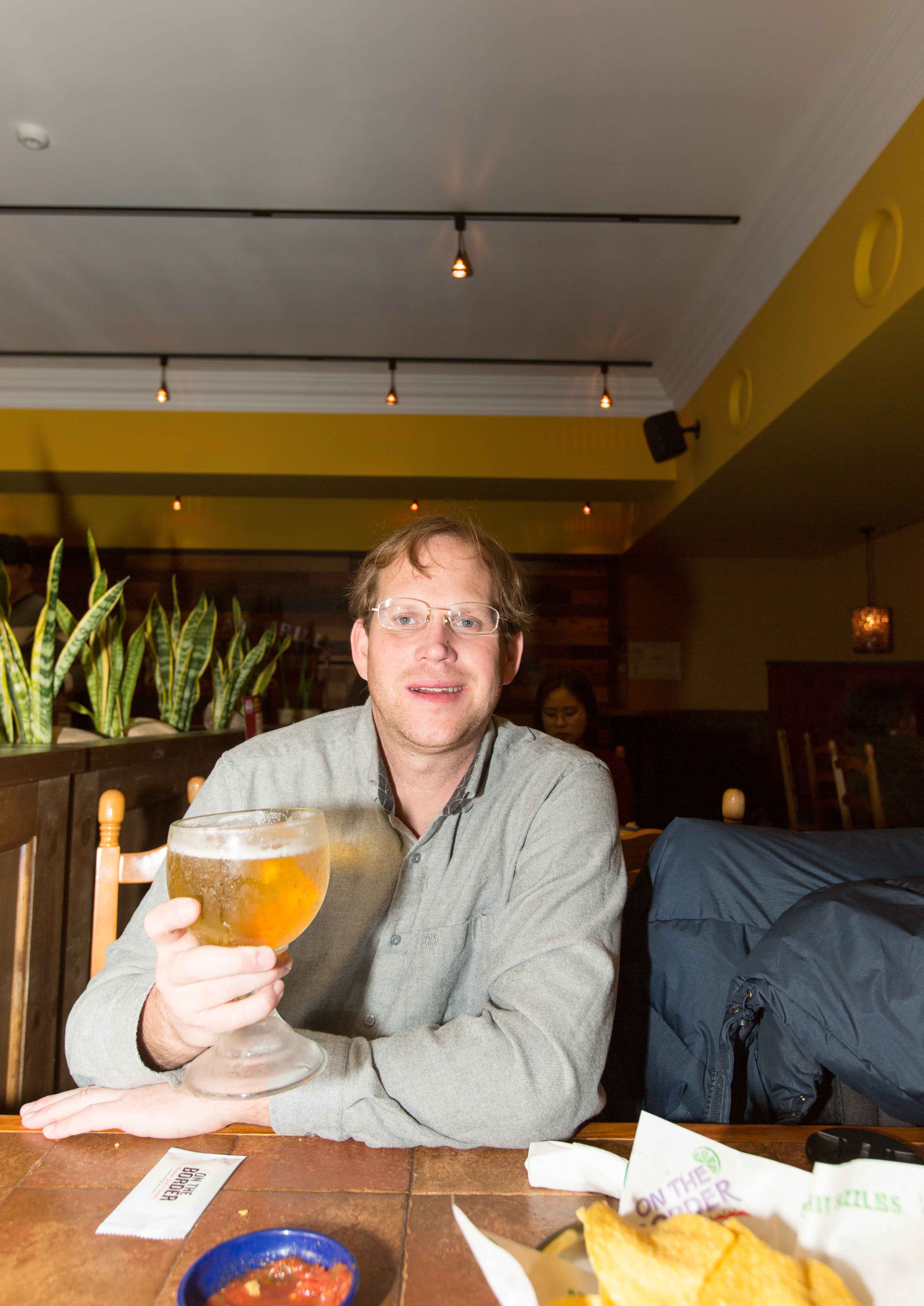 For starters we ordered the Steak Grande Nacho’s (large size), which were excellente! Unless you get a sampler platter, I would definitely recommend you start with a plate of these!  Make sure you tell the wait staff that you would like the appetizers to be served before the main course (Or tell them you will finish ordering after the appetizers arrive).  One of my pet peeves about eating out in Korea is that all your food seems to arrive at once. 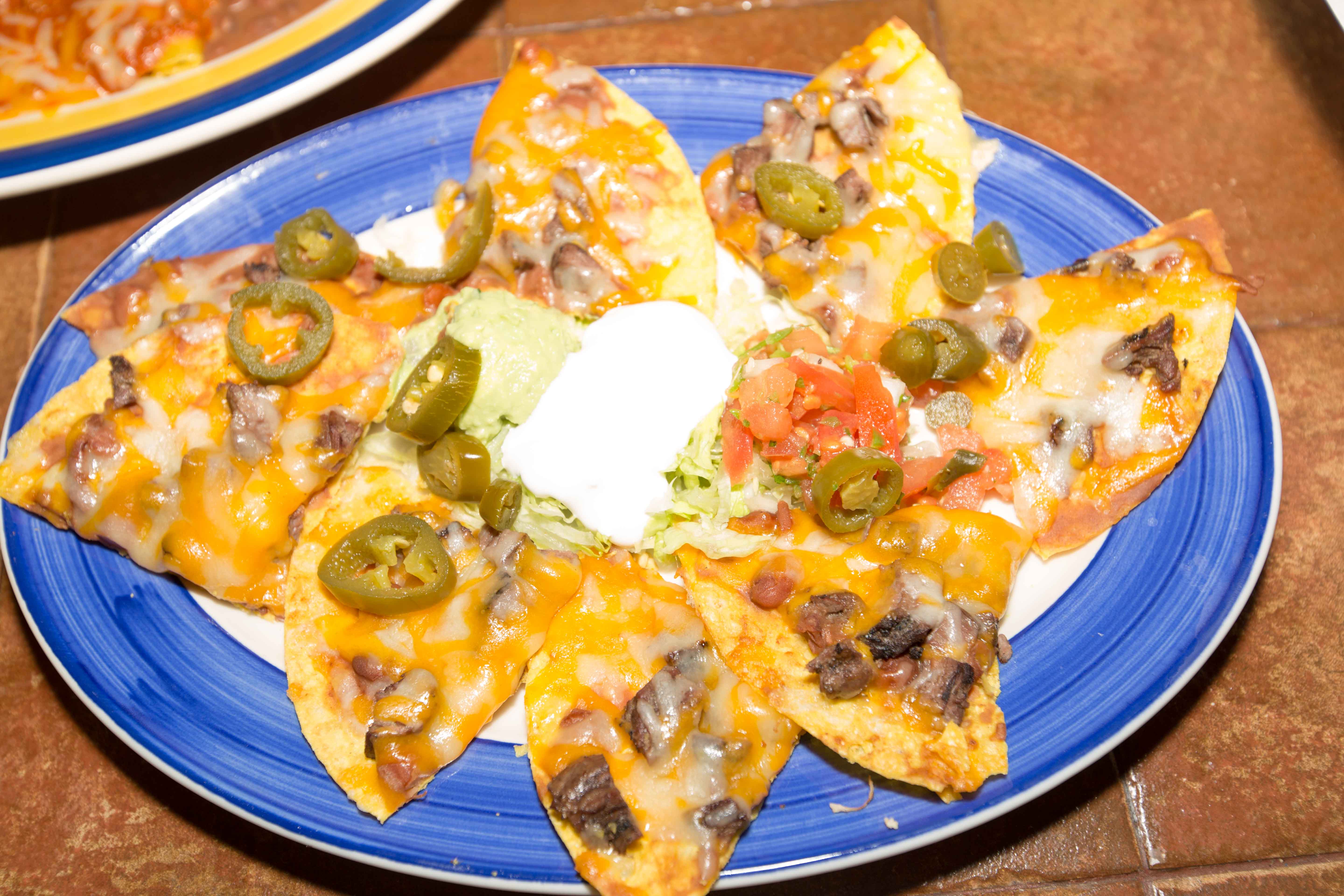 Mi Jung Ordered the Beef Enchiladas with refried beans and rice, served with a sparkling water. 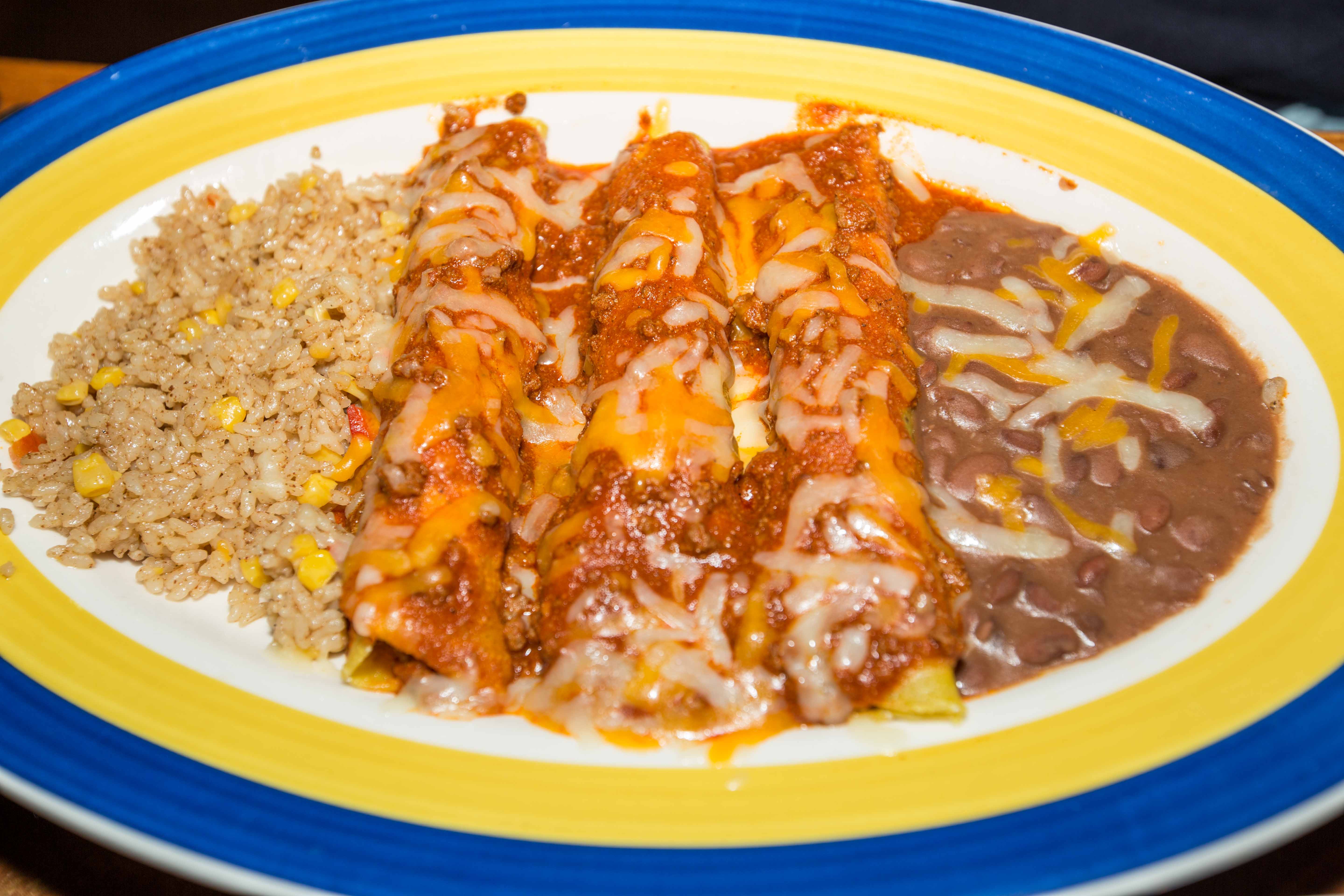 I made my own combo plate, here are 2 beef soft tacos, 2 cheese and onion enchiladas, with refried beans and rice.

These were Mi Jungs favorite enchiladas in Korea, she said these were the closest she has come to the taste of Nati’s Mexican Resturant back in San Diego.   I really enjoyed the taco’s and the cheese and onion enchiladas!  Definitely on par with some of the Mexican food back home, my only complaint was the lettuce was too cold, it was like it was brought straight out of the refrigerator.  However, talking other people, this is how they prefer their toppings.

On subsequent visits, I substituted the beef tacos’ with 2 Beef Supreme Taco’s, these are almost identical, but have deep fried onions on top.  The taste was awesome.  I would highly recommend the 4 combo with the supreme taco’s!

Except for being ignored at the bar, the wait staff were friendly and attentive. The restaurant was large and had some really nice decorations. Located in the heart of Itaewon makes it very easy to get to.  You will get enough food to fill you up,  even though you might find it a bit pricey if comparing it to the restaurants back in the states.  The taste is excellent, so you definitely should not be disappointed.  On The Boarder has now claimed the spot of my favorite Mexican restaurant in Korea.

If you are in the Itaewon area, I definitely recommend giving On The Boarder a try!

How to get there:

Seoul Metro line 6 to Itaewon, Way Out # 2. Walk straight until you see On The Boarder on your left, on the second floor.