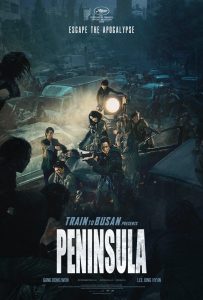 Wrapping up 2020 with a Korean film review, it has been since back in August when I blogged Ode To My Father that I have reviewed a film here on Brent’s World, and given what a year 2020 was I thought it was only fitting that we reviewed Korea’s latest zombie apocalypse film.  Pendula is a stand alone sequel to the immensely popular Train To Busan which was released in 2016.  With an all new cast, and set immediately following the events in the original film. Peninsula takes you on a 2 hour zombie filled thrill ride that should keep you on the edge of your seat.

Jung-Seok (played by Gang Dong-won) a Captain in the Korean Marines is trying get his elder sister, nephew and brother to an evacuation ship in the southern port of Busan.  Along the way they encounter a stranded family who begs them to at least take their daughter.  They ignore the family and make it to the ship.  However en-route to their destination it is discovered that an infected person has made it onboard and quickly infects several other passengers, including Jung-Seok’s nephew.  His sister refuses to leave her son, and Jung Seok has no choice but to seal the cabin and leave the refugees to their fate.

Several years later, struggling to survive in Hong Kong Jung-Seok, his best friend Chul-min are recruited by the criminal underworld to return to South Korea to retrieve a delivery van with 20 million in US dollars locked in the back.  If successful, each will get a split of half the money.

The two decide to join a team of 2 other people who successfully make it into the port.  Will they be able to locate the missing truck?  Will they be able to avoid the zombie hoards who control the streets during the day? As they cannot see in the dark?  To make matters worse, with the absence of law in order, even the militias assigned to protect the people from the zombies and other outlaws have turned rouge and become bandits themselves.

If the teams make it back alive, will their underworld bosses keep their part of the deal?

I enjoyed Peninsula, it had good action, special effects, and a pretty good plot.  Though at some parts it did become formalistic.  As a standalone sequel it is worth the watch.  As it does not rely at all on the original you can watch the film without having seen the original.

Go to your favorite source of online movies, and find out!

Peninsula is available at the AppleTV Store, and Amazon Prime.
It is also available on Blu-Ray and DVD at www.amazon.com

After watching Peninsula, please tell us what you thought of the film.  Do you agree with our review? Post your response below in our comments.

Thank you for visiting Brent’s World.  If you enjoyed this blog and wish to be notified when new content is posted. Please consider registering by clicking HERE.