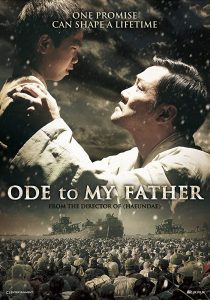 It has been several months since I have reviewed a Korean film, for those that frequent Brent’s World we reviewed Cheer up Mr. Lee in May.  I am always on the lookout for good Koreans cinema, especially those films that give glimpse into Korean history or culture.  Such as the aforementioned title in reference to the Daegu subway fire in 2003, or when we find out that Oh Mal-soon’s husband died in a mining accident while working overseas in Germany in Miss Granny.  Which also plays a role in the film I am about to review

While searching for more potential Korean films to review I stumbled upon  Ode To My Father which was billed as The Korean Forrest Gump.  As I really liked Gump for its delving into topics in American history that are often glossed over by most young Americans, I was curious enough to make it a must watch.

Ode To My Father, released in 2014 was the 7th film directed by Yoon Je-kyoon and stars Hwang Jung-min as Yoon Deok Soo who is an old cantankerous store owner in Busan (Pronounced Pu-San), who doesn’t seem to get along with anyone, including his family.  He is being pressured by unknown business men, and the rest of the store owners on the street to sell KKotbun, a money losing import store he bought from his uncle when his aunt who ran it for decades passes away.  His niece asks Deok Soo why he gets so angry as it scares her, and asks him if he has any memories.

We are then shown younger memories of Yoon Deok experiencing pivotal times in South Korean history, beginning with him being putting in charge of the safety of his youngest sister Maksoon during the Chinese invasion of the port city of Hungnam, which later became part of North Korea.  https://en.wikipedia.org/wiki/Hungnam_evacuation.  While boarding the SS Meredith Victory, Yoon Deok loses his sister and his father goes back to find her, but not before telling young Yoon Deok that he is not the man of the family and must work and study hard to support them until he returns.

The movie takes us through Yoon Duk-soo’s life trying to make sure he fulfills his fathers wishes, by going to Germany in 1963 as a Gasterbeiter to work in the coal mines, where he meets his future wife Youngja (Played by Yunjin Kim), and earns enough money to buy his family a house, and pay for his brothers education.

Yoon Duk Soo then goes to Viet Nam in 1973 as a technician to pay for his older sister’s wedding, and after the fall of Saigon in 1975 saves a young Vietnamese girl who is almost left behind after the Viet Cong attack a village, they are saving refugees from.  He returns to Korea with enough money for his sister’s wedding and a wounded leg.

In 1983 KBS began special broadcasts of family members in Korea trying to find lost family members,  https://en.wikipedia.org/wiki/KBS_Finding_Dispersed_Families Yoon Duk Soo travels to Seoul in an attempt to find his father, but ends up locating his lost younger sister who was adopted by an American family and now lives in Los Angeles.

At a large gathering with the family, which I assume is Chuseok (Korean Thanksgiving), Yoon Duk once again gets upset and retreats to his room, where he is seeing crying and prays to his father.  Letting him know that he has fulfilled his wishes and scarified so his large family can be successful and that he finally found Maksoon, and that it was very hard to do so.  His father responds that he has in fact fulfilled al his wishes and that he is very grateful.  We are shown Yoon Duk and Youngja on the roof of an apartment, and Yoon duk finally decides to sell the store because he has realized his father is most likely dead, or would be too old to visit anyway, and we are finally given the reason asked so often by others throughout the film, “Why do you have to be so obstinate and hold on to this money losing store?”

If you are looking for a movie with insight into a few pivotal moments in South Korean history, I highly recommend Ode To My Father.  It does a really good job of delving into life after the Korean War, the sacrifices made during Koreas rapid industrialization under the rule of President Park and how important family is to Korean society without being heavy handed.  While I do not agree with the comparison to Forrest Gump, that discussion would go beyond the scope of this already long review.

Ode To My Father can be purchased on DVD at Amazon.com

NOTE:  None of the links/content on Brent’s World is monetized.  I do not make any money on my content, or links.

If you have seen, or choose to watch the movie reviewed here, please do not post spoilers in the comments!  If you wish to discuss the film head on over to our forums, register for an account and reply to the following post. http://www.catracing.org/hendrb/forum/viewtopic.php?f=11&t=27489