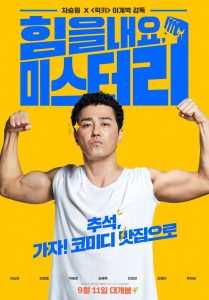 It seems like I never have a chance to screen and review any new Korean films, for instance my last review of Christmas In August was released in 1998,  which was recommended to me by a taxi driver who was dropping me off at the train station for my final move to Gunsan where the movie was filmed.  Happily, we will break the mold today as we review Cheer Up Mr. Lee, a comedy by director Lee Gye-Byeok.

The story centers around Cheol-Soo an attractive, physically fit, but mentally handicapped Korean (Played by Cha Seung-Won) who works at his family’s noodle restaurant in Seoul.  Cheol-Soo’s life takes an unexpected turn when he kidnapped by a woman (Kim Kye-Ok) who turns out to be the grandmother of a daughter, he never knew he had named Saet-Byeol (Um Chae-Yeong) who is in the hospital dying of childhood leukemia.  The grandmother is hoping Cheol-Soo’s blood will match so that a bone marrow translate can be performed saving Saet-Byeols life.

Saet-Byeol soon escapes from the hospital with the intent of going to Daegu to obtain a signed baseball card for one of her friends and fellow patients at the hospital.  Cheol-Soo goes with Saet-Byeol to help keep her safe and is soon pursued by his younger brother and niece and Saet-Byeol’s grandmother.  Chae-Yeong’s friend and owner of the gym he frequents learns that the family is frantically trying to locate him, and he enlists the help of the Korean mafia.

The movie plods somewhat slowly through the first half, and the audience is left with a lot of questions.  What is the background story of Cheol-Soo, how come he did not know he had a daughter, how and when did Saet-Byeol get sick?  This is answered for us in the second half, in jarring dramatic fashion, that might extract a few tears.

Saet-Byeol and Cheol-Soo are found by the family, and she is able to get the autographed baseball memorabilia for her friend.  The media attention gained by the backstory attracts a mass marrow detitanation search, but will it be in time?

I enjoyed Cheer Up Mr. Lee, even though it was slow going until the middle part, the second half definitely made up for it. , I would definitely recommend this for a date, or family film night.  The only problem is that it may be hard to find.  If youa re able to watch the film please come back to our forums and discuss it. (Please do not post in the comments as it will spoil it for those who wish to watch it.

Where can I buy Cheer Up Mr. Lee?