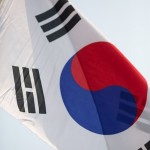 Out And About In Korea

Ever since learning about rail biking, I had been fascinated by the idea of being able to travel portions of Korea’s un-used rail sections on a cart under your own power. I had been trying to talk Mi Jung into accompanying me to one of the Korean rail bike destinations for quite a while.

There are several locations that offer rail biking in Korea, the two most popular being:

We had tried to go to the Jeongseon rail bike while we still lived in Daegu, but ended up running out of time. This time we planned to leave Seoul on Sat, stay overnight in a motel and ride the Samcheok rail bike on Sunday, take the following Monday off and go to the famous Penis Park (I will blog about Penis Park in Samcheok Part 2) then return to Seoul that afternoon. 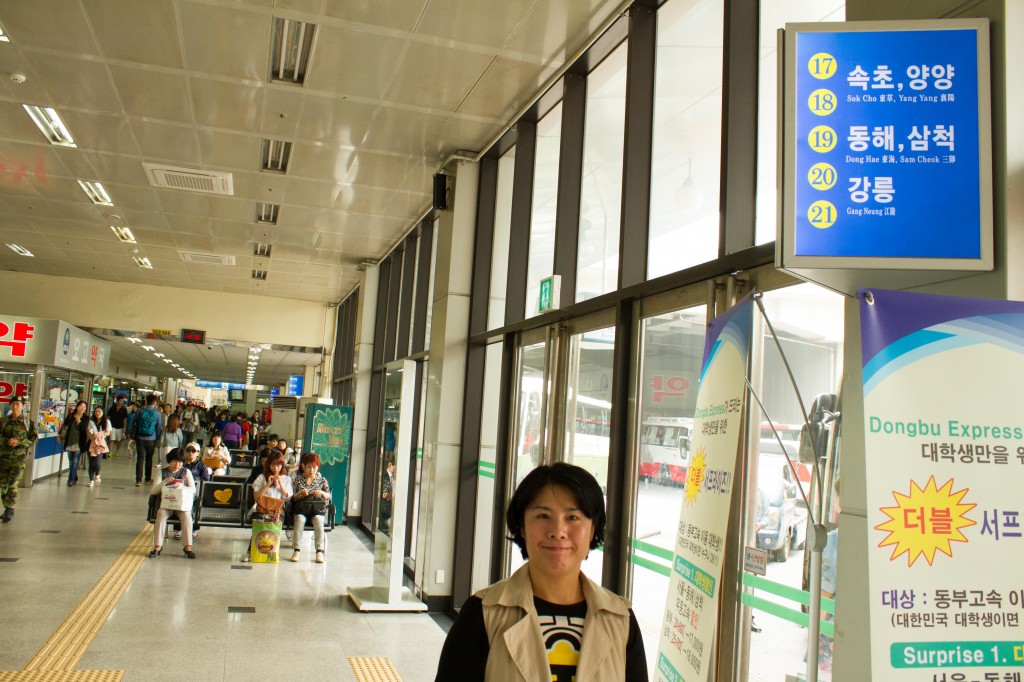 We arrived at the DongSeoul (East Seoul) bus terminal around noon and bought tickets for our 3 hour trip to Dong Hae. We immediately checked into our motel upon arrival, which turned out to be a love motel with a “business room” in the basement. When looking at the advertisement, I thought a “Business Room” was a business lounge found in high end  hotels.. However Mi Jung explained to me it is really a gentleman’s club! We quickly put our luggage in the room and headed out for dinner. We found a restaurant that served Samgyeopsal, and Dakgalbi (A spicy chicken dish in pepper sauce.). 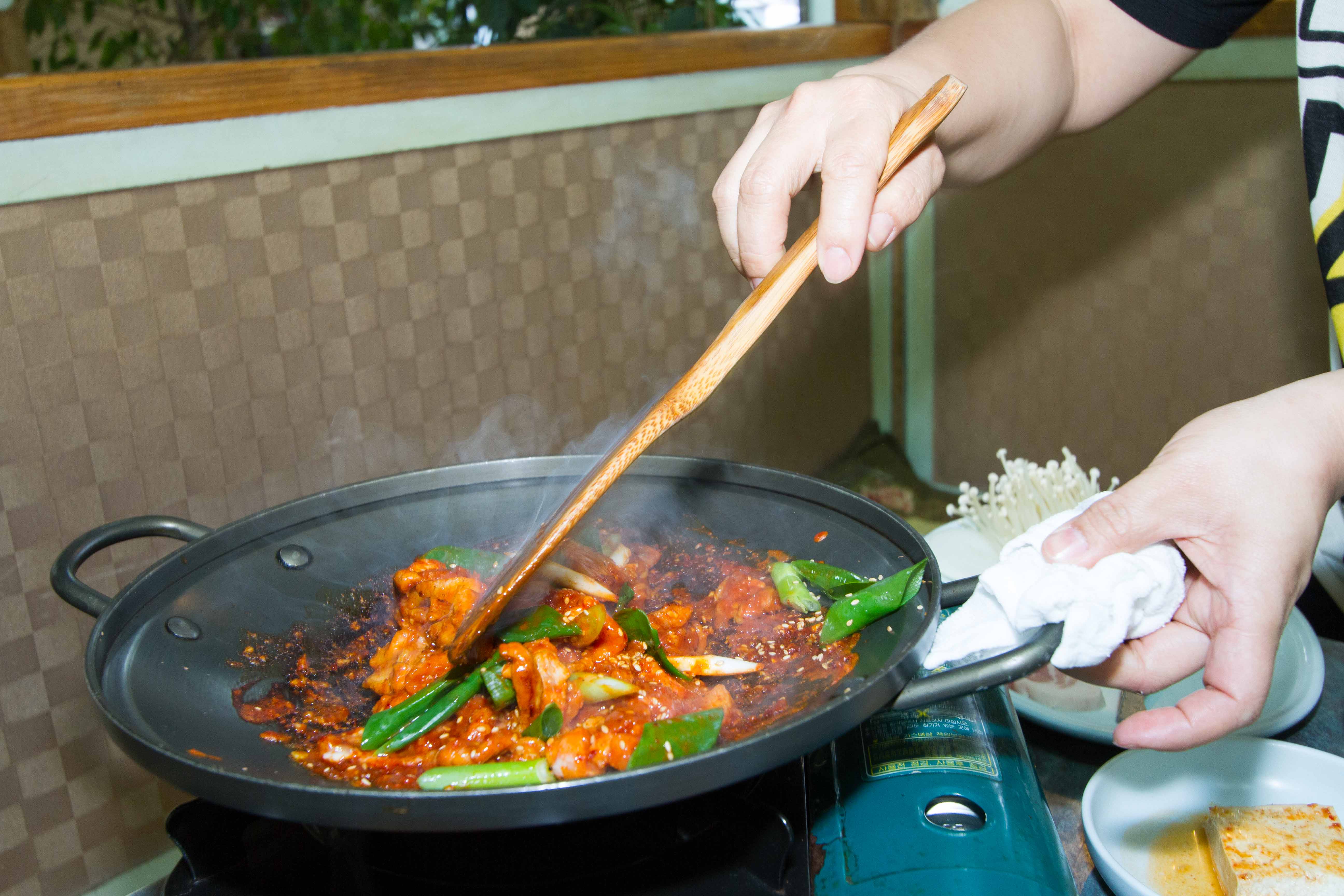 After dinner we headed down to the beach, I had just received the Canon EF-S 10-22mm f3.8 lens for my Canon 7D (We did this trip in 2013), and I made quick work checking out my new toy! Here was one of my first pictures. Definitely NOT a good portrait lens, but great for landscapes. The effective focal length here is roughly 35mm with the 1.6 crop, taken at f8.0. 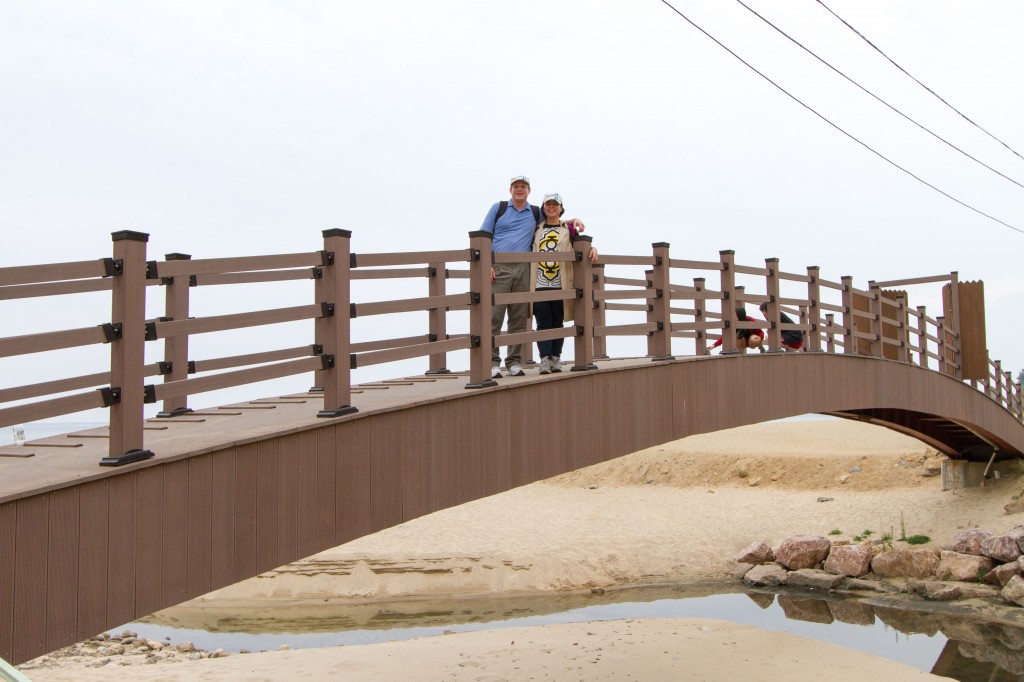 Here the lens is at its widest Focal Length of 10mm (16mm FF equiv.) One of the strange things about Samcheok is that even with it being well South of Seoul, it is still heavily fortified against a North Korean beach assault. Here you see the rusting barbed wire at the entrance to this foot trail. 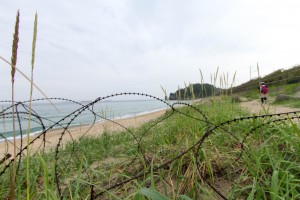 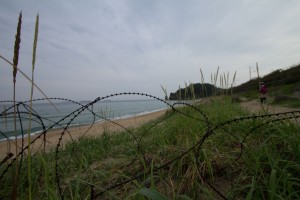 Here is also a good example of the problems I had shooting with this lens, looking back, if I had the knowledge that I do now about exposure control, I would have tried to open this up a bit more. Shot at 10mm (16mm FF equivalent), 1/125 @ f7.1) the picture comes out rather dark, with quite a bit of vignetting. Here is a comparison after it has been exposure corrected, with lens profile correction applied in Lightroom.
These concrete jack looking things that Mi Jung is walking on, is not just to help with beach erosion, but also will impede the progress of amphibian landing craft. 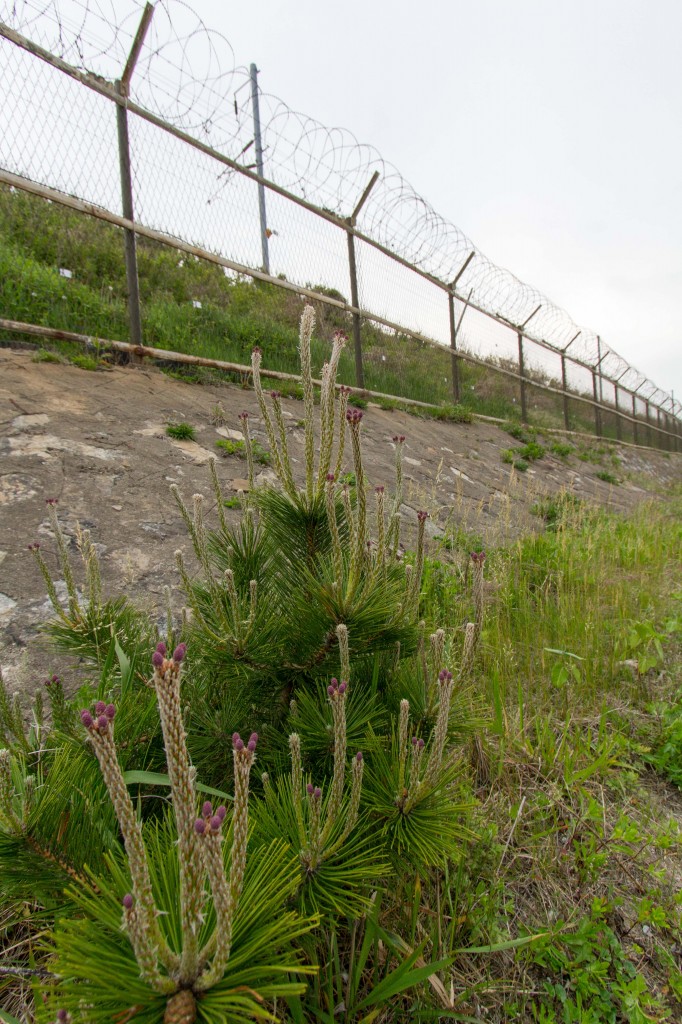 Remember at this wide of an angle, I am standing probably a foot From Mi Jung’s face, I am really surprised you don’t see a shadow of myself or the lens somewhere on Mi Jung. I like how with the water and rocks behind Mi Jung you almost get a Fish Eye effect. You would not normally take a portrait at 10/16mm because it tends to distort facial features.. However I think it worked very well in this case.

Switching to the 18-55mm for our final portrait. It’s back to the motel for a night on the town before going to the rail bike the following morning.

We made reservations to depart from Guncheon station at 2pm, They did not have any single cars available so they let us use a 4 person car, but only charged us for a double. This worked out in our favor because we were able to put our backpacks on the seats behind us. 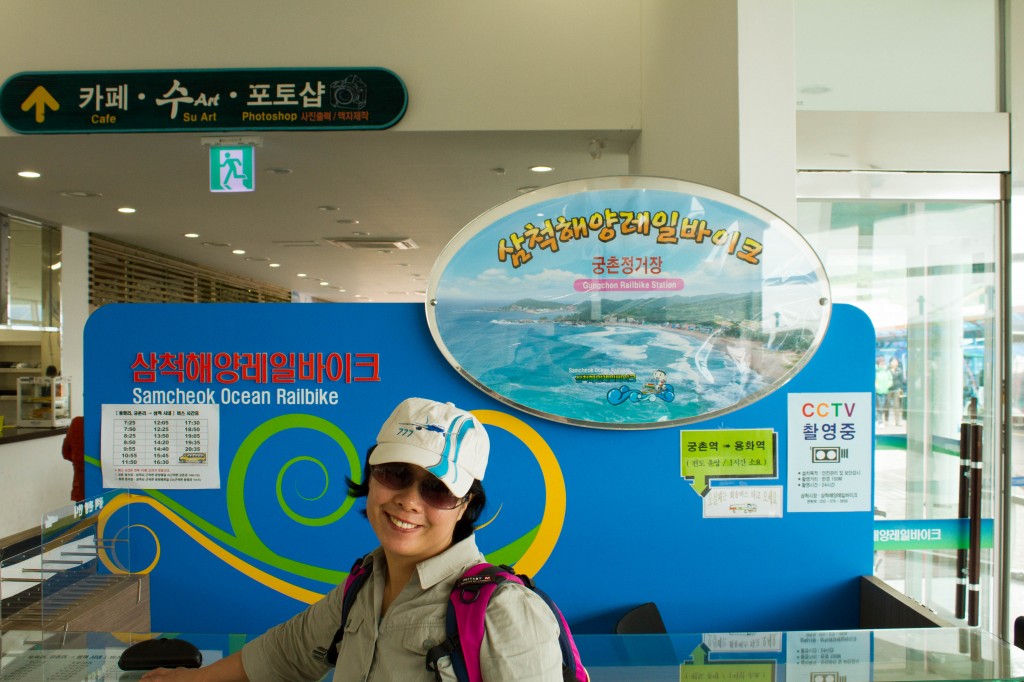 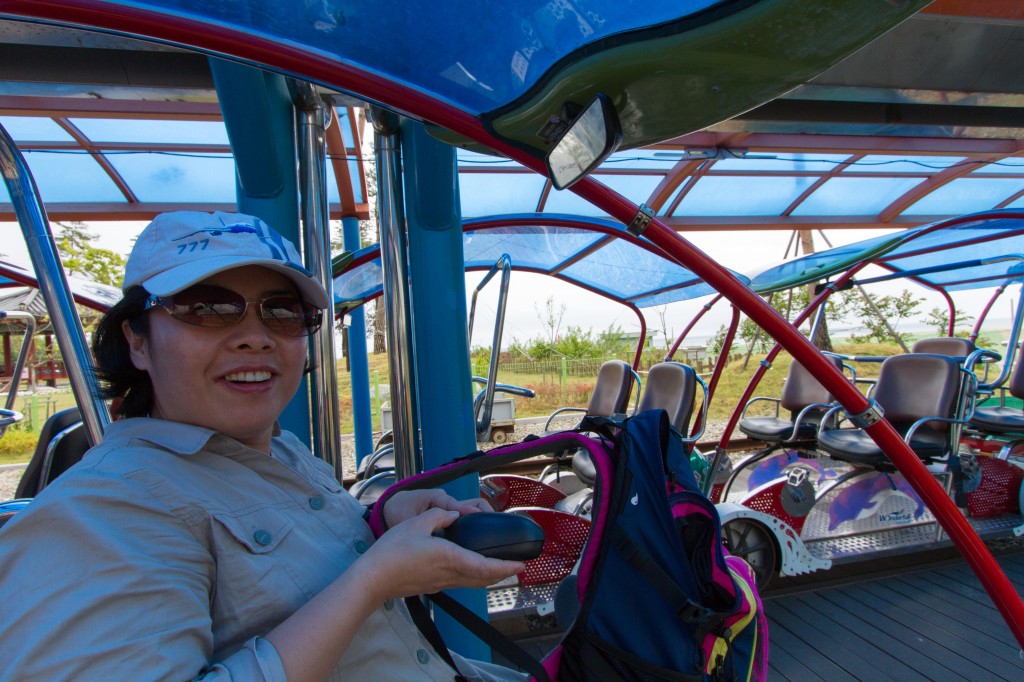 The railway takes you past beautiful empty white sand beaches with crystal clear water. The only thing out of place are the clouds threatening rain. Unfortunately it is very rare that you have crystal clear blue skies in Korea, but I still enjoyed being near the water. The smell of the sea really started making me home sick. You pass through 2 tunnels on the Ocean Railbike. The first tunnel is decorated with Korean athletes in honor of Seoul hosting the 1988 Summer Olympics. 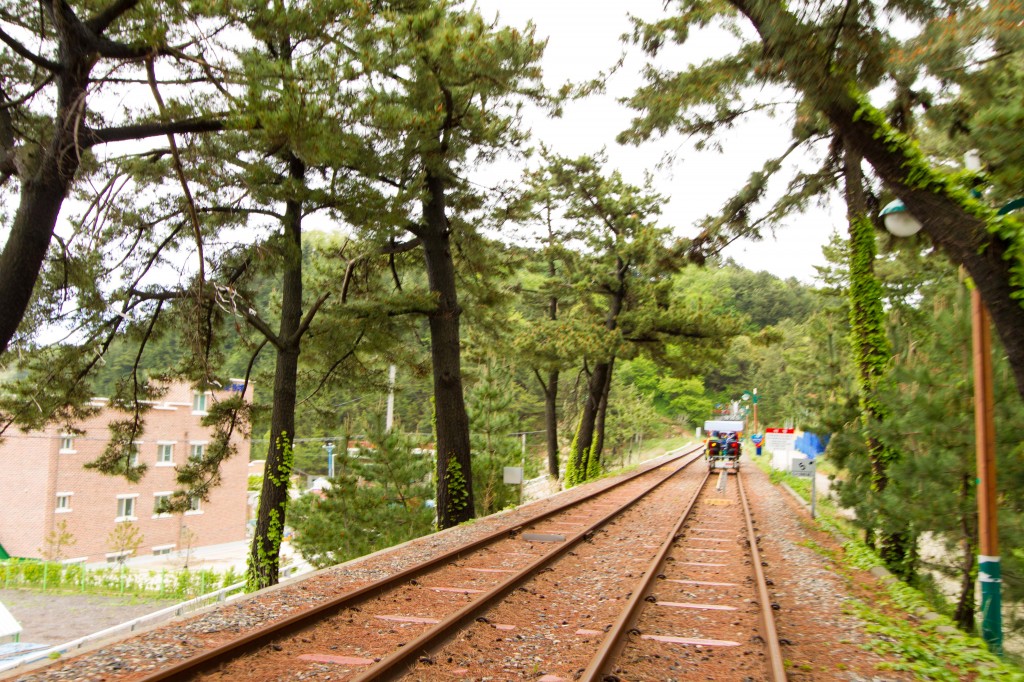 You then stop at a midpoint station, and you have a chance to stretch your legs and take photographs of more empty beach. I would imagine that it would get quite crowded hear in the summer months, but certainly not as crowded as Busan. 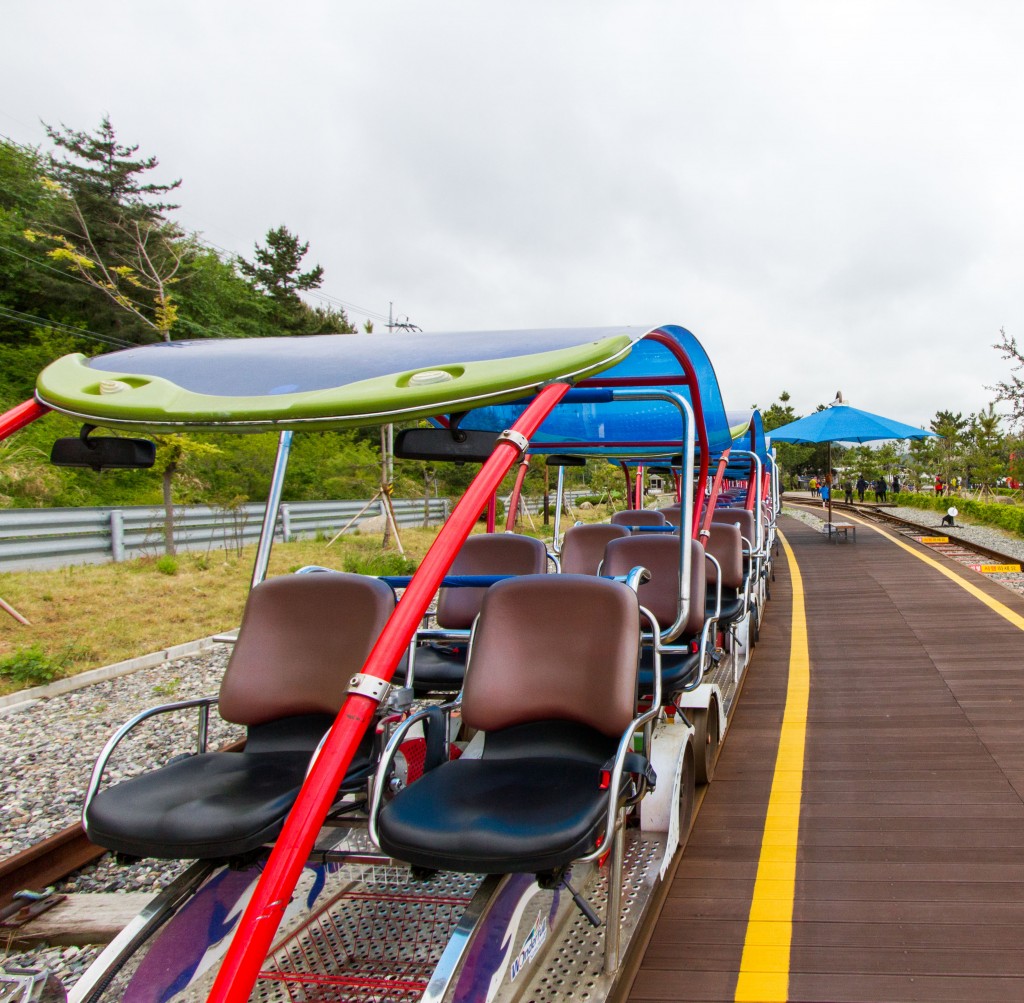 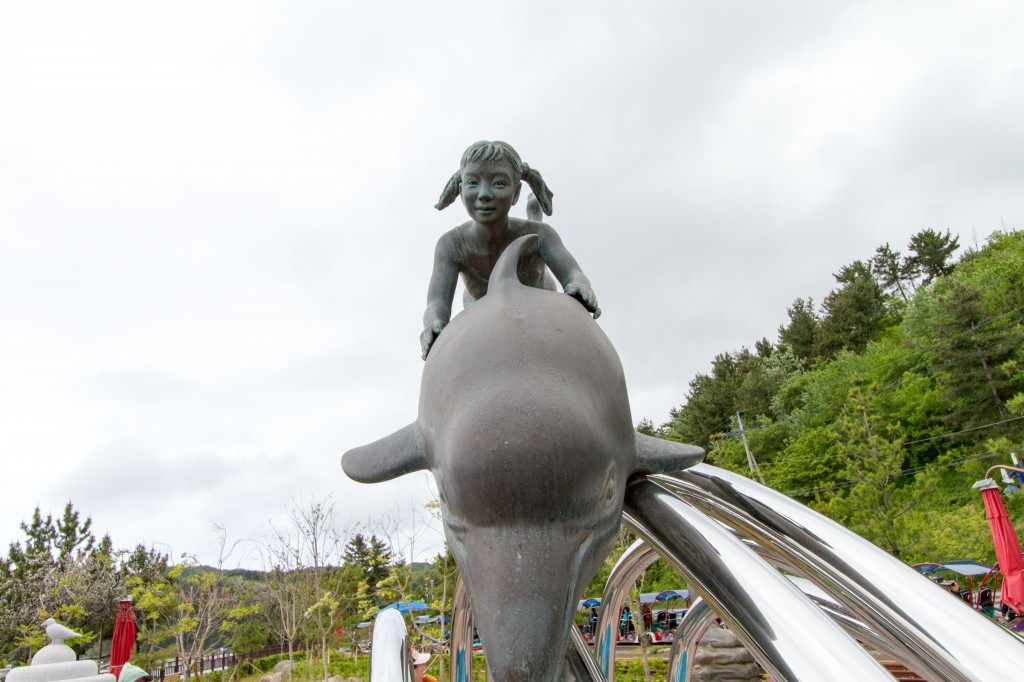 On the second half of the railway, you encounter the second and longest tunnel that is filled with laser special effects, and statues of sea creatures. Upon exiting the tunnel you are turned around in Yonghwa station and thus concludes the ride.

I really enjoyed the experience, and actually wished the railway was a bit longer. At no time did I feel like I was being overexerted, but still felt like I got a bit of exercise. If you are looking for a quiet outing on Korea’s East Coast. I highly recommend a stop at the Samcheok Railbike. Don’t forget to make reservations!