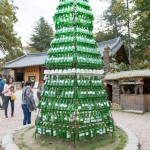 Nami Island, is a half moon man-made island that resulted from the construction of the Cheongpyeong Dam in 1944. It is named after General Nami, who died at the ripe old age of 28 after being falsely accused of treason by King Sejo. The actual body has not been found though there are a couple of cairn’s where the body is thought to be buried.

The island was not developed into it’s current state as a nature and art attraction until 1965.

One of the unique side stories of Namiseom (Nami-Island), is that it has succeded from the Republic of Korea, and become it’s own self governing Micro-Nation.  It even has it’s own flag, passport stamp, and telephone card. Visitors must pass through “Immigration” before boarding the ferry.

Mi Jung and I took the ITX (An updated, faster Samoeul service), from Yongsan station bound for Gapyeon station.. You can also take the subway, which also departs from Yongsan, but the trip is roughly 45 minutes longer.

Once at Gapyong station, we boarded a bus to take us to the Nami Island ferry landing. At the ferry landing there is a bungee jump (Which was closed due to high winds), and a Zip Wire ride. I had read about the Nami Island Zip Wire attraction via the internet and found it fascinating that it is the only ZipWire I know of that you use to transport you to your destination. 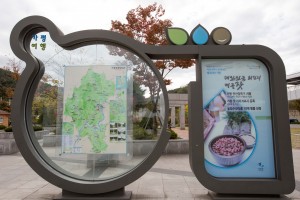 They had some really bizarre art work at the bus stop – The music teacher does not look pleased. 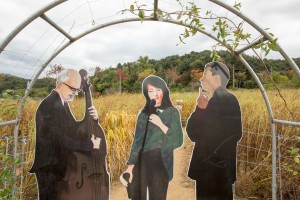 The Musicians that perform amongst the rows. 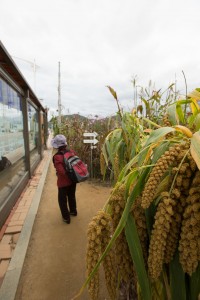 We are waiting at the bus stop across from Gapyon Station, Does anyone know what these strange corn looking flowers are?  They even grow on great big stalks like corn.
Mi Jung had mentioned that she would try the ZIpWire, even though she is afraid of heights.. I had a feeling she would back out, but was pleasantly impressed that she rode it like a trooper! She actually has stated she would like to ride it again! Here is a short video of the NAMI ISLAND ZIPWIRE.

PHOTOGRAPHERS BEWARE: While you will be allowed to take your camera, and possibly your gear bag, They would not let me take my tripod across. There is also a 92KG weight limit. We ended up renting a locker that was readily available to keep my gear in. The cost of the ZipWire includes the price of the return ferry. We ended up  just purchasing an additional round trip ticket to bring the rest of the gear across after riding the ZipWire. Large lockers cost 1,500w

After picking up the camera gear, it was time to go through Immigration, and return to the Naminada Republic. 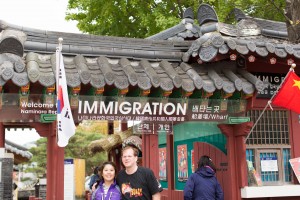 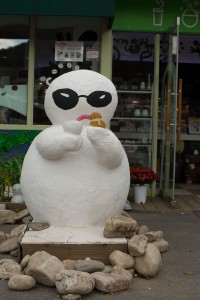 Before Heading through Immigration, I first had to get a picture of this Menacing looking snowman. Could this be the Naminara Republics draft board?  I thought this was a republic of peace?  Do artists fight wars?

Recycling is really big in Korea, I liked how they turned these shoes into planters. 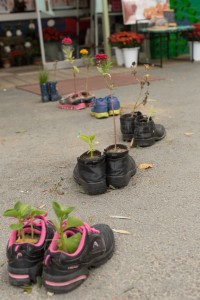 Very excited to be in the Naminara Republic. 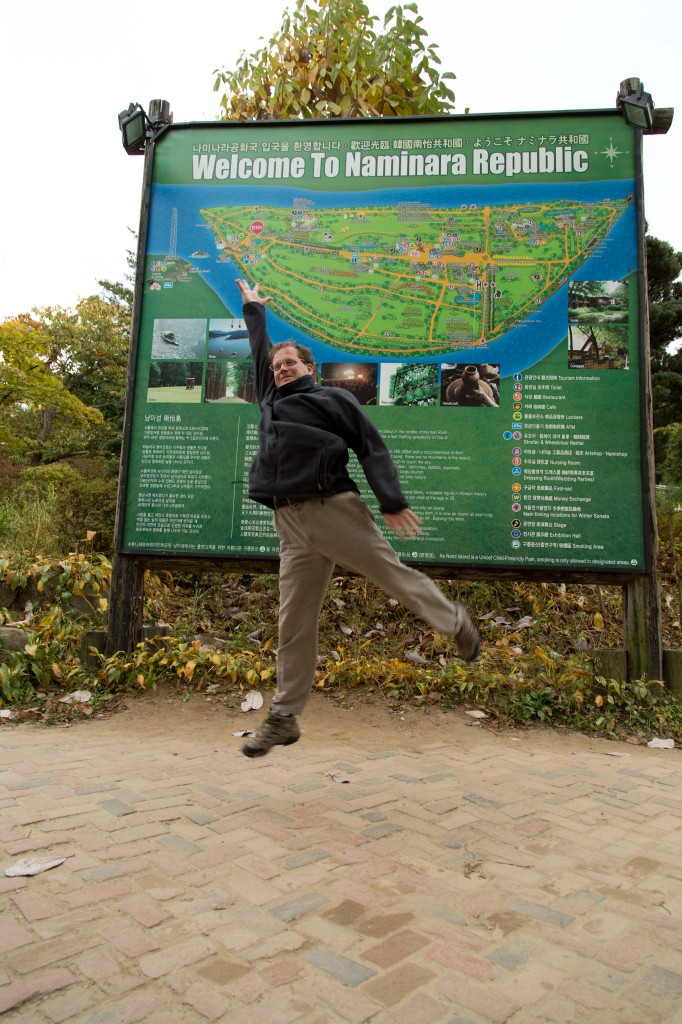 Welcome to the Naminada Republic!

The Island really does have a lot of offer if you are looking for eclectic art displays. I think this pillar had a little too much Soju last night. 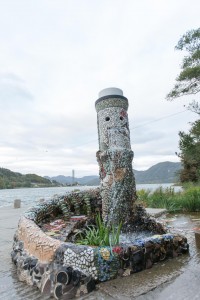 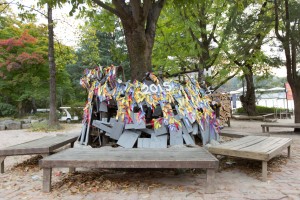 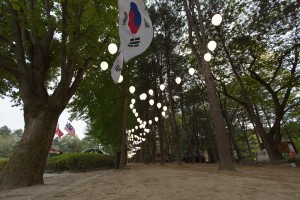 I really liked this Pathway.  This was taken with my 16 – 35mm f2.8L lens, laying flat on my stomach, With my gear bag on, I must have looked like I had been grabbed by the snowman and pressed into service!  That’s it!!  They are drafting soldiers for a photography contest!

Not quite sure what this was, but I kept getting the urge to say “NEE”, and regretted not having any shrubbery – 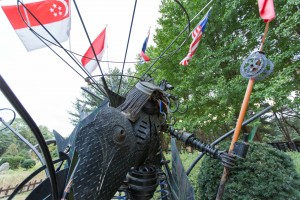 Very multicultural!  – It hits me at odd times that I am living in a foreign country, and far removed from the melting pot politics back home.  Seeing the flag of the Peoples Democratic Republic of Viet Nam being readily displayed made me chuckle.  Can you imagine what would happen if someone put this sign up at the entrance to the Coronado Bay Bridge?  I did however notice the lack of flags from the Democratic Republic Of Korea.. 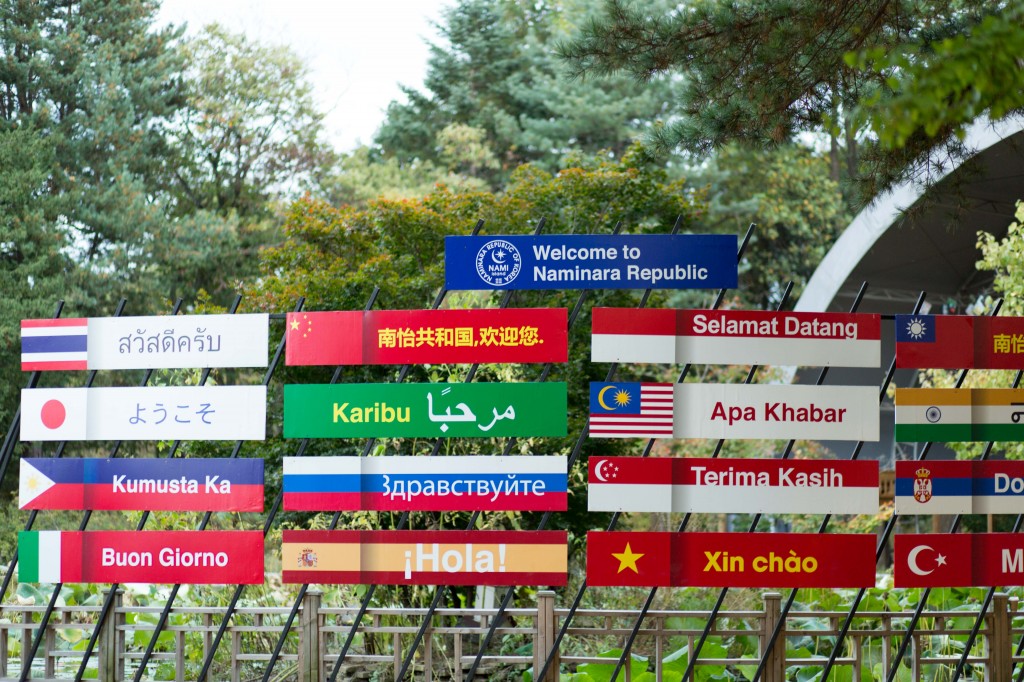 Is this a budding or a sprouting romance? (Grass Topiary) 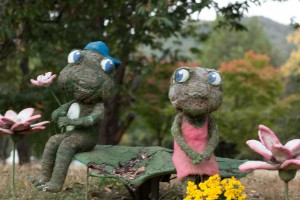 After a long day of traveling, excitement, and photography, it was time to head on back to Seoul. On the way to the train station we stopped for some Dakgalbi (Chicken in a pepper sauce with vegetables.), which Chucheon is famous for. 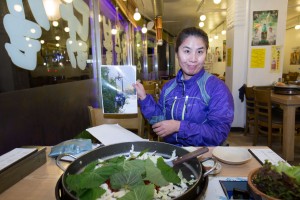 MiJung cooking the Dukalbi table side. 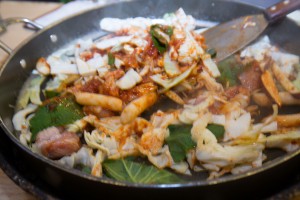 *If you are carrying allot of belongings, rent a locker by Immigration for 1,500w. The cost of the return Ferry after the ZipWire is minimal.