After dinner the previous night, we began cruising back down the Tolne Sap river to tie up at the Sithowat Quay in Phnom Penh, the capital city of Cambodia. While I was interested in getting into Phnom Penh, I was looking forward to today’s itinerary with trepidation. Scheduled for today’s excursions was a visit to the museum of the Cambodian genocide in Choeung Ek, and to the Khmer Rouge prison outside the city called S-21.

This will be my second visit to these locations, as visiting the sites was my principle reason to visit in 2005, as I was doing research on Pol Pot and the Khmer Rouge at the time. I found the history fascinating and profoundly sad at the time, and was not looking forward to going back. Though I was happy that I would have an opportunity to take photos of S-21 this time, as I only took video back then.

Fortune however was not smiling kindly on me however, as one of the first things to greet was, was the international symbol of “No Photo’s”. I asked the tour guide when that rule was enacted, as I had gotten allot of great video back in 2005. He said they had only been there since the previous week. I am not really sure why they stopped allowing people to take photographs. As most of the exhibits are available online by a simple Google search, it isn’t like anything could be covered up.

So for this part of the blog, I will display the video that was shot in 2005, starting with the Genocide museum at Choeung Ek. Choeung Ek was a former orchard, and Chinese burial ground, and was turned into an execution center by the Khmer Rouge and operational between 1975 and 1979. Prisoners were taken to Choeung Ek to be executed and disposed of after being being brutally tortured and forced to confess to their “Crimes against the revolution.” Which is most cases was simply being or appearing educated.

The site is marked by a prominent Buddhist stupa that contains the bones of victims discovered at Cheoeung Ek. The stupa contains more than 5,000 human skulls. The lowest levels contain the clothing the bodies were buried with. 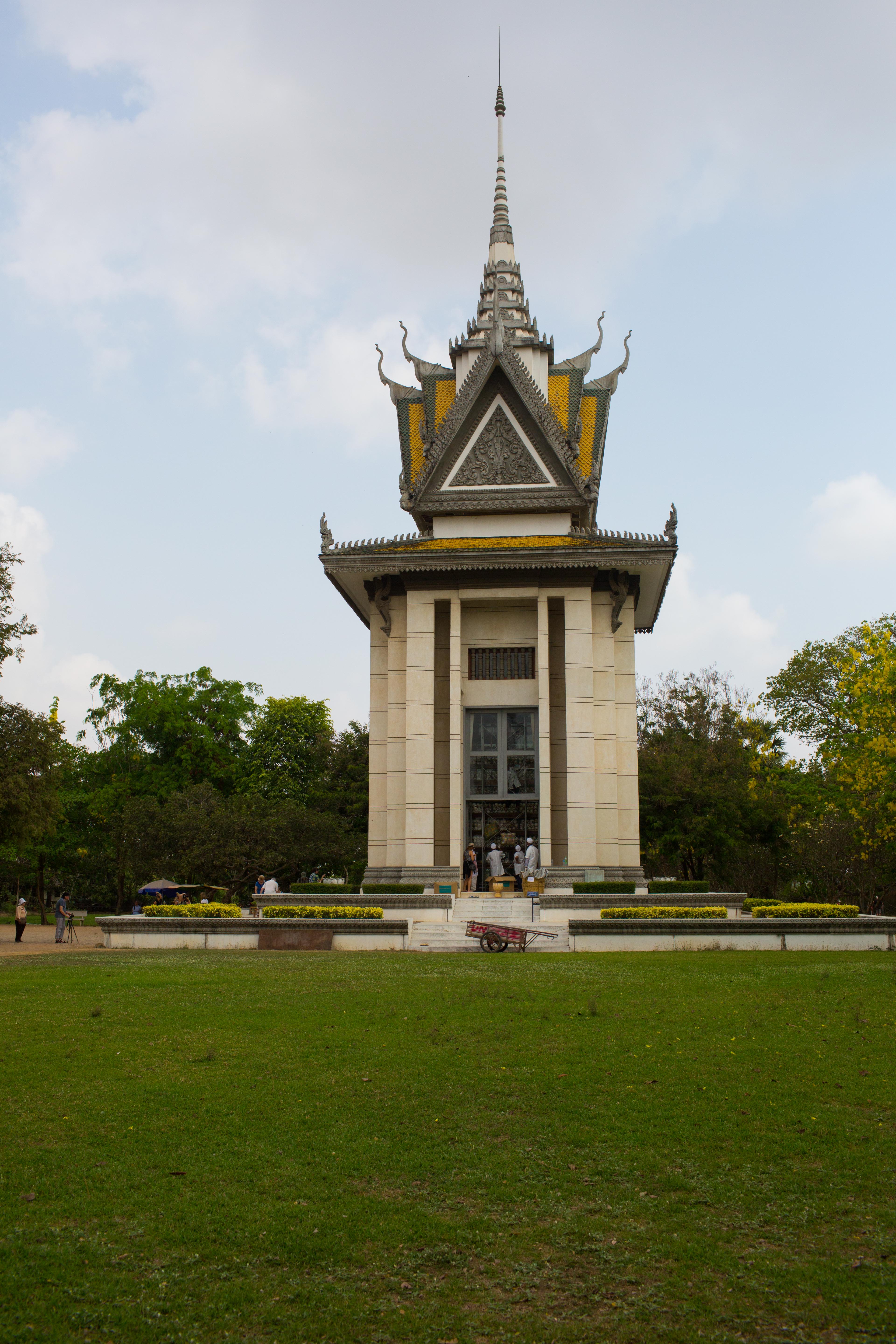 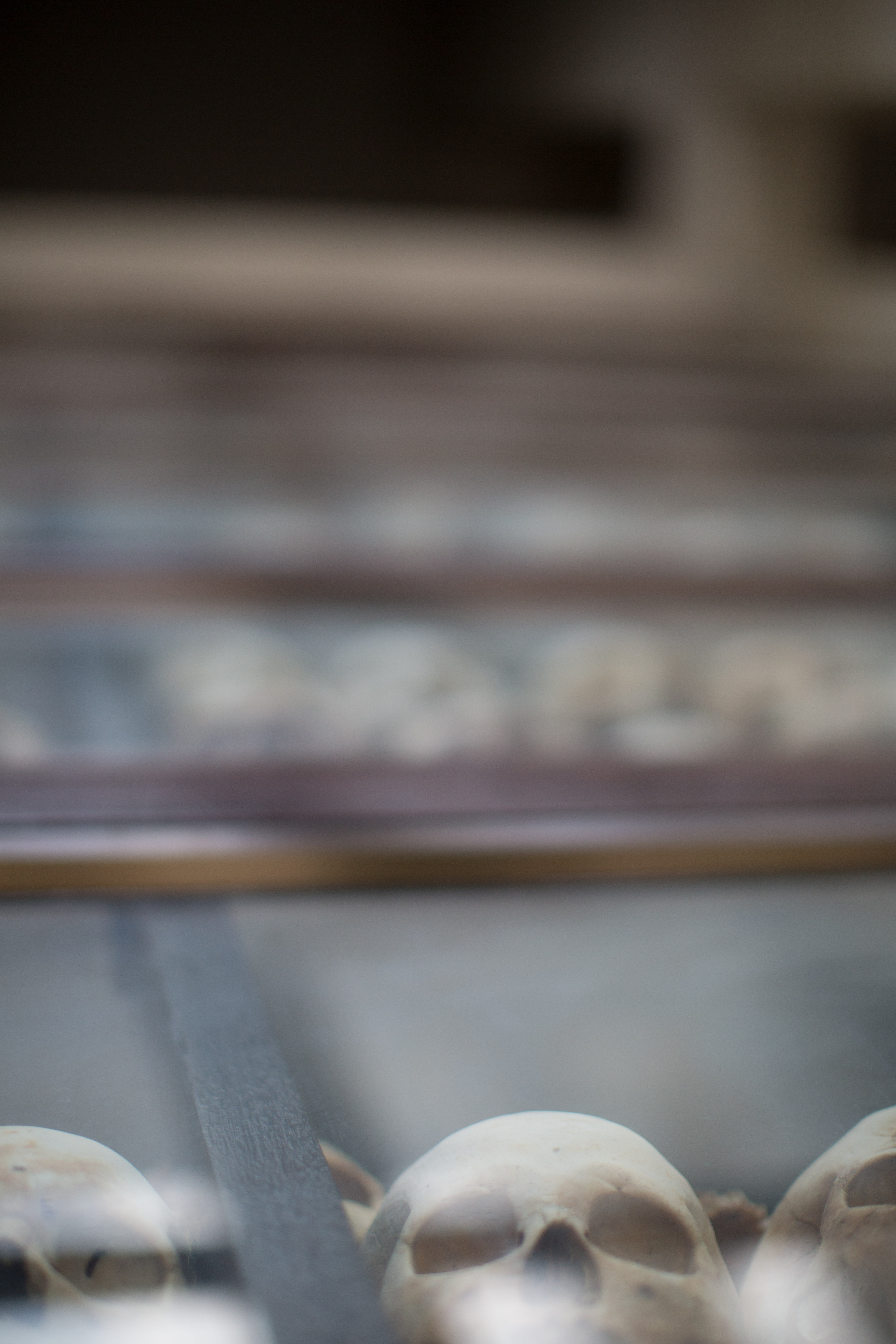 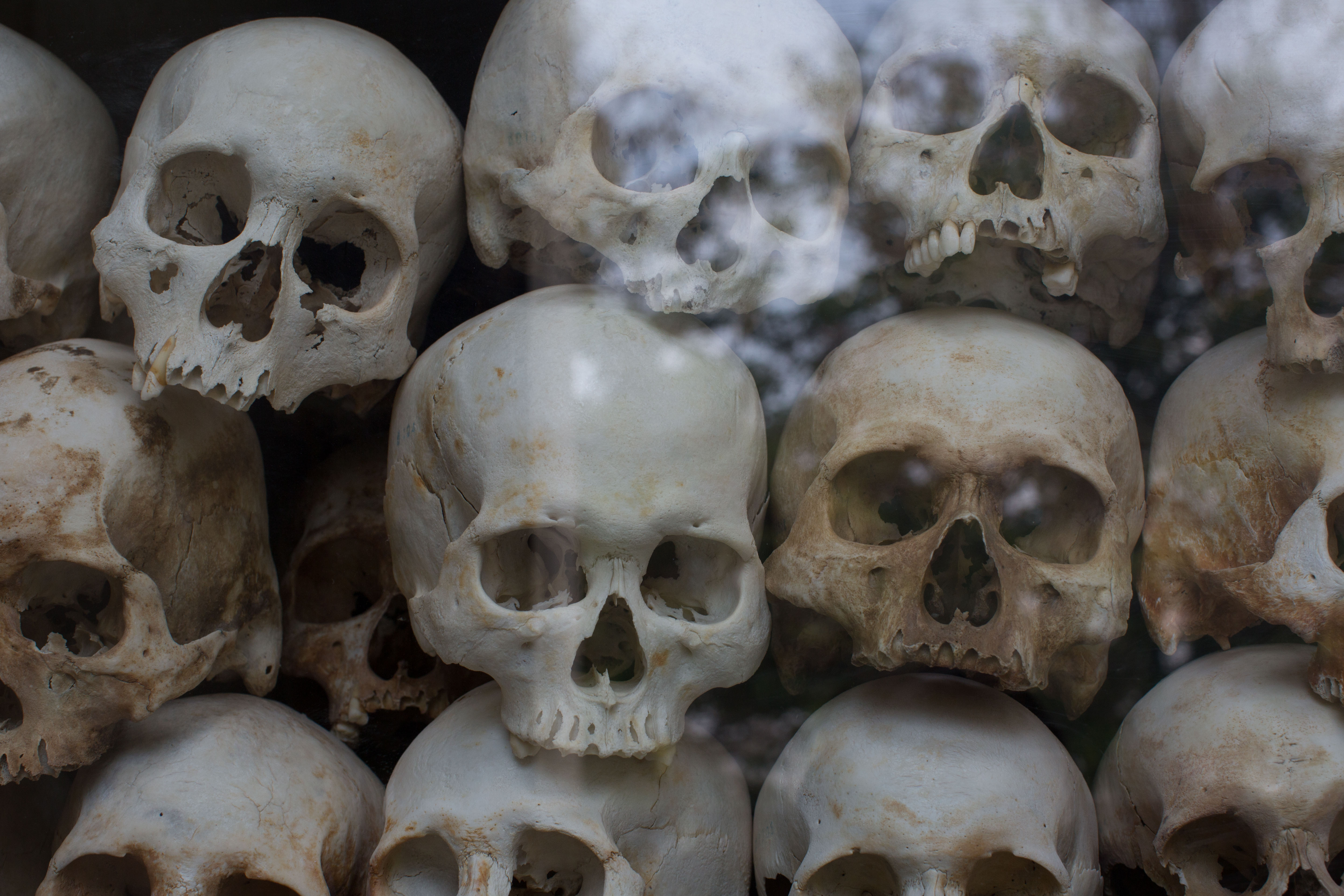 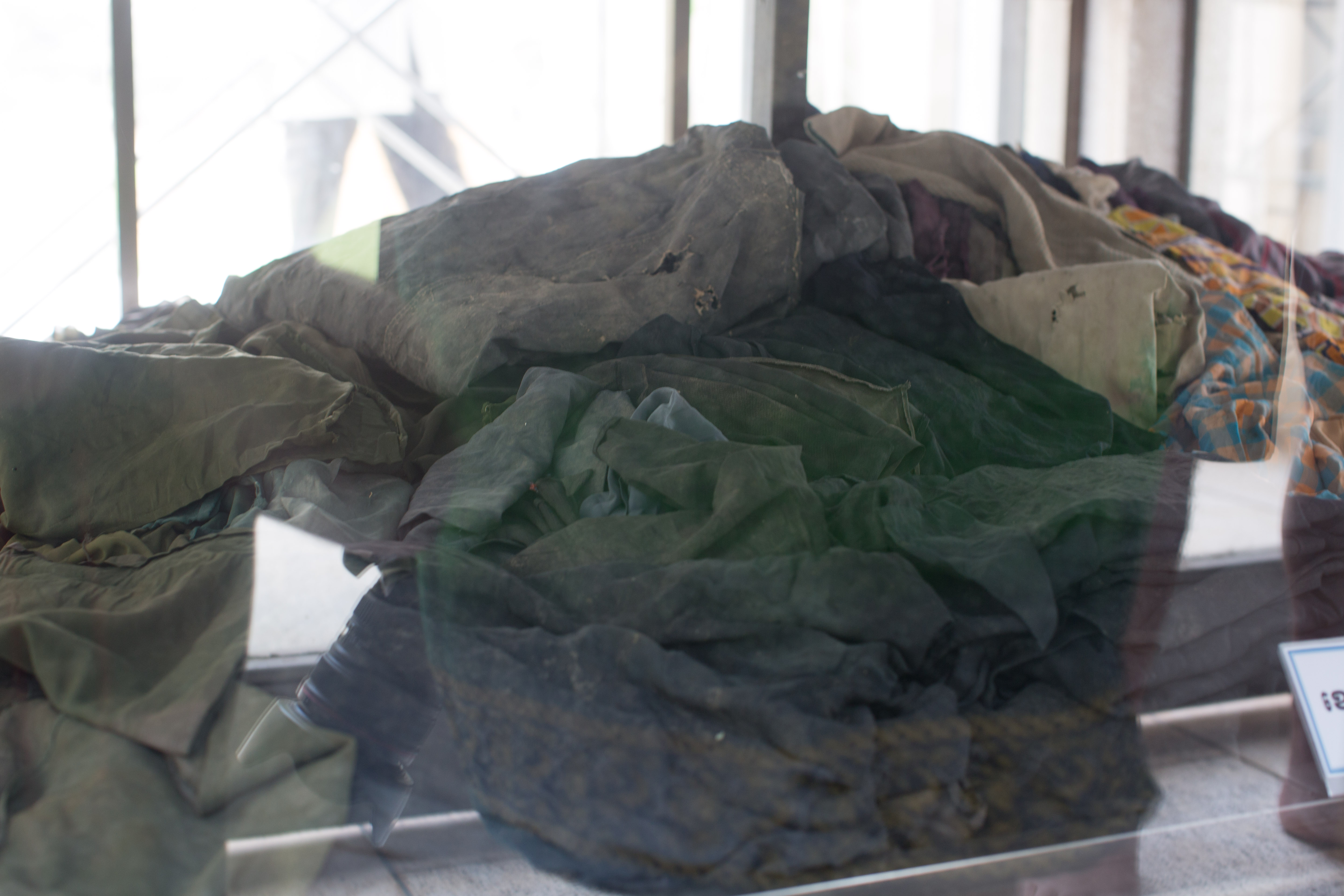 Since executing the traitors with bullets would have been too costly, many of the skulls are seen with blunt trauma injury sustained with farm tools. 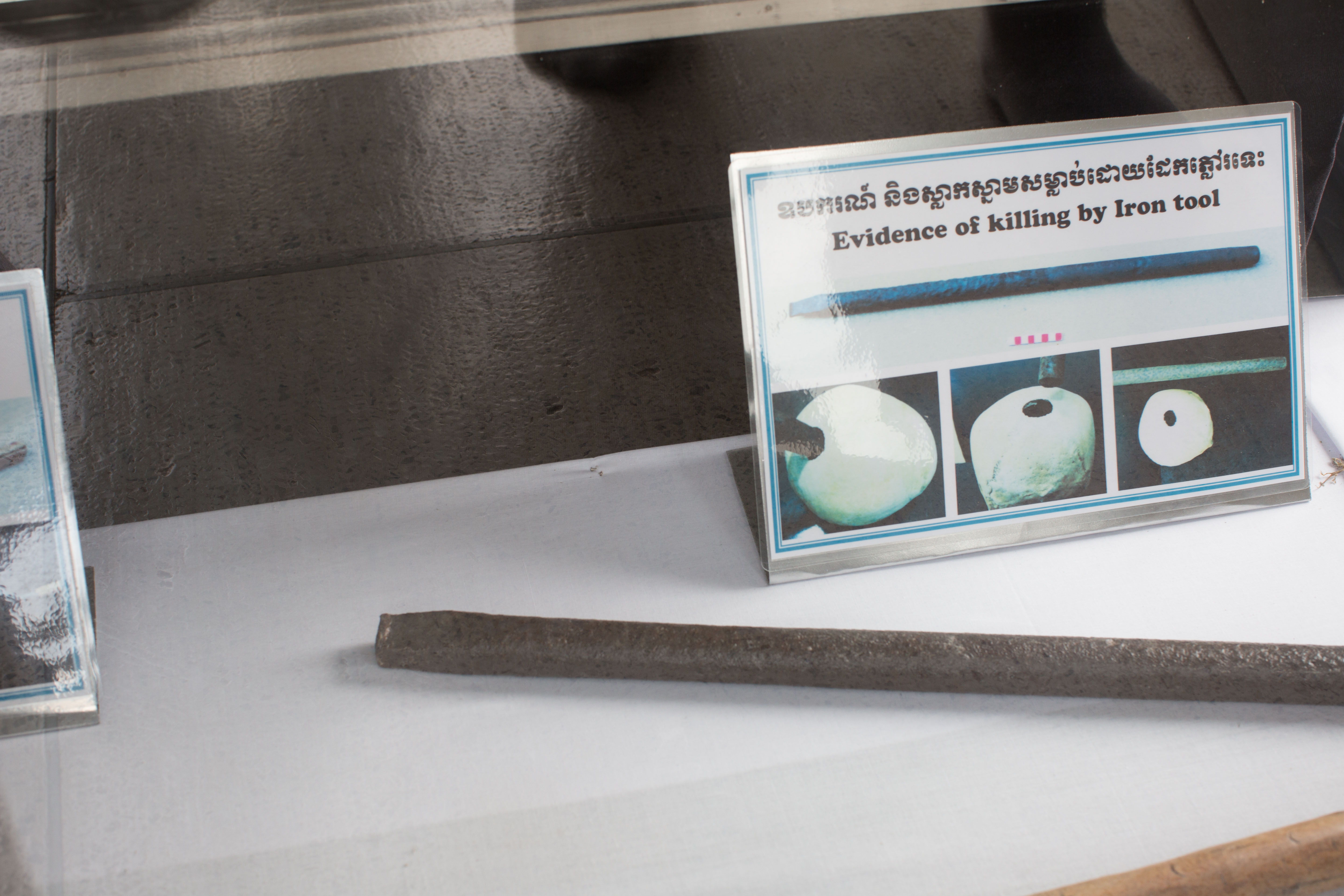 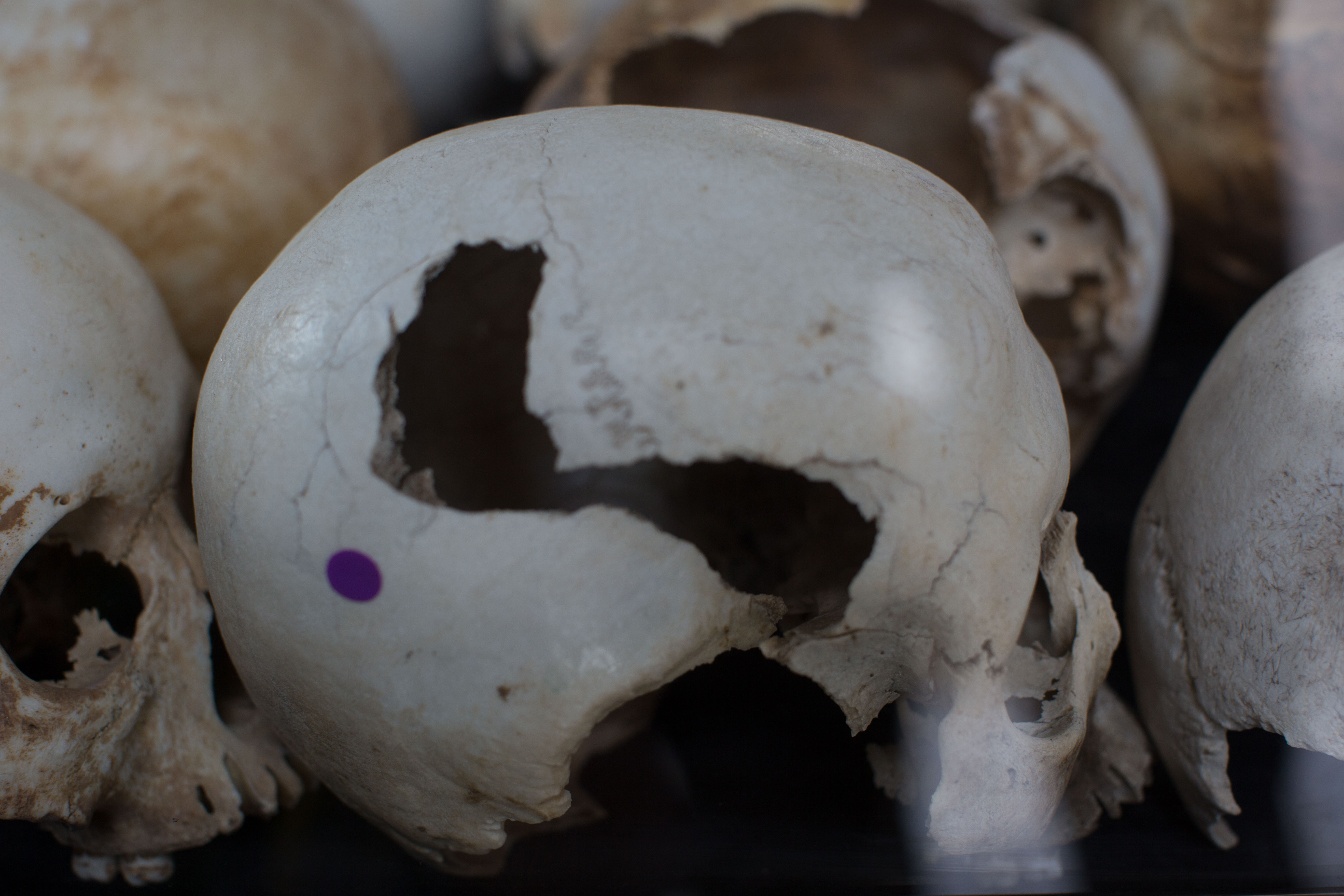 It is a very sobering experience to see the open mass graves, and bone and clothing material that is still being brought to the surface after the rainy season. 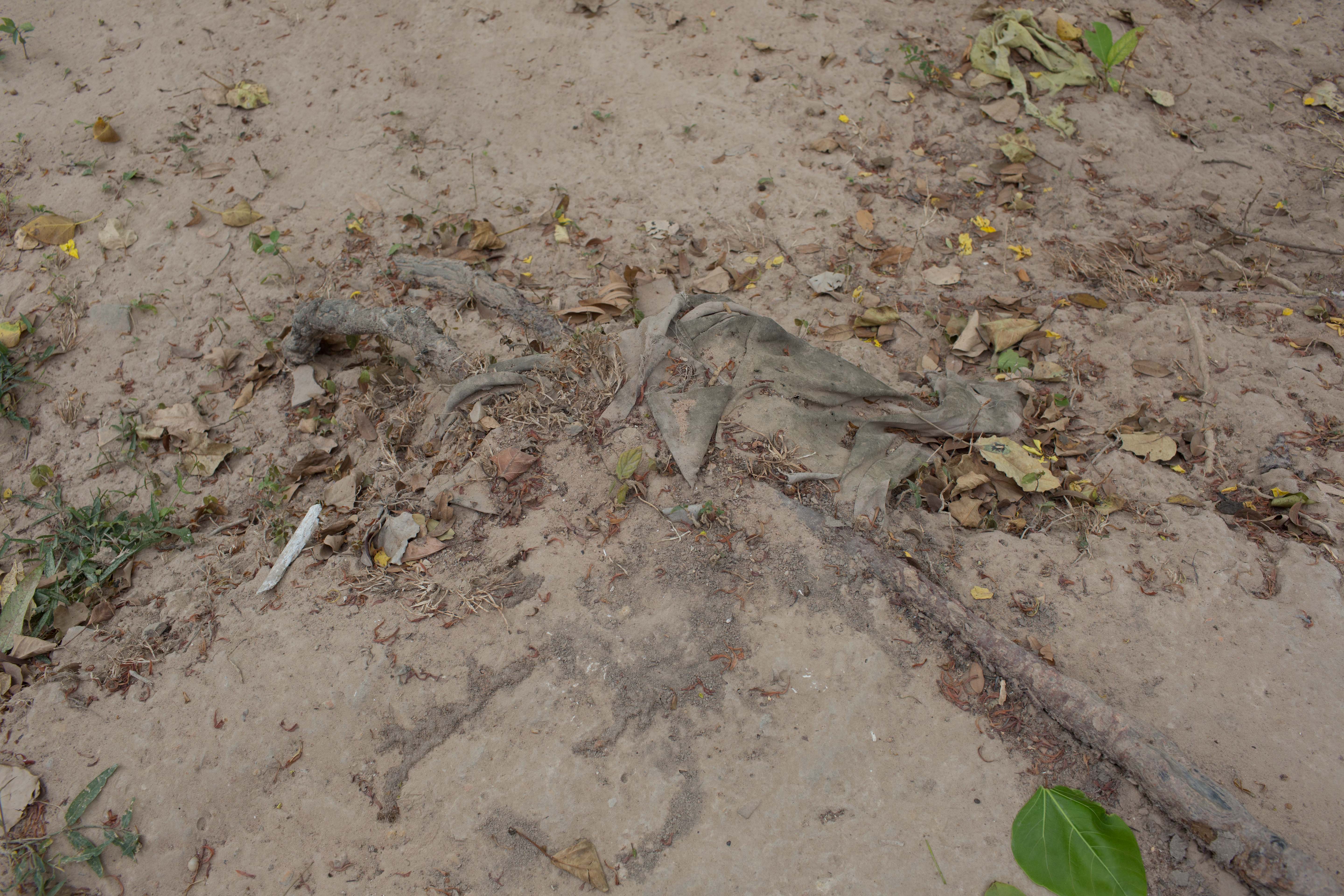 Walking amongst the mass graves, I do not know of any words that could adequately express the human misery that must have been experienced here and throughout Cambodia during the reign of the Khmer Rouge. 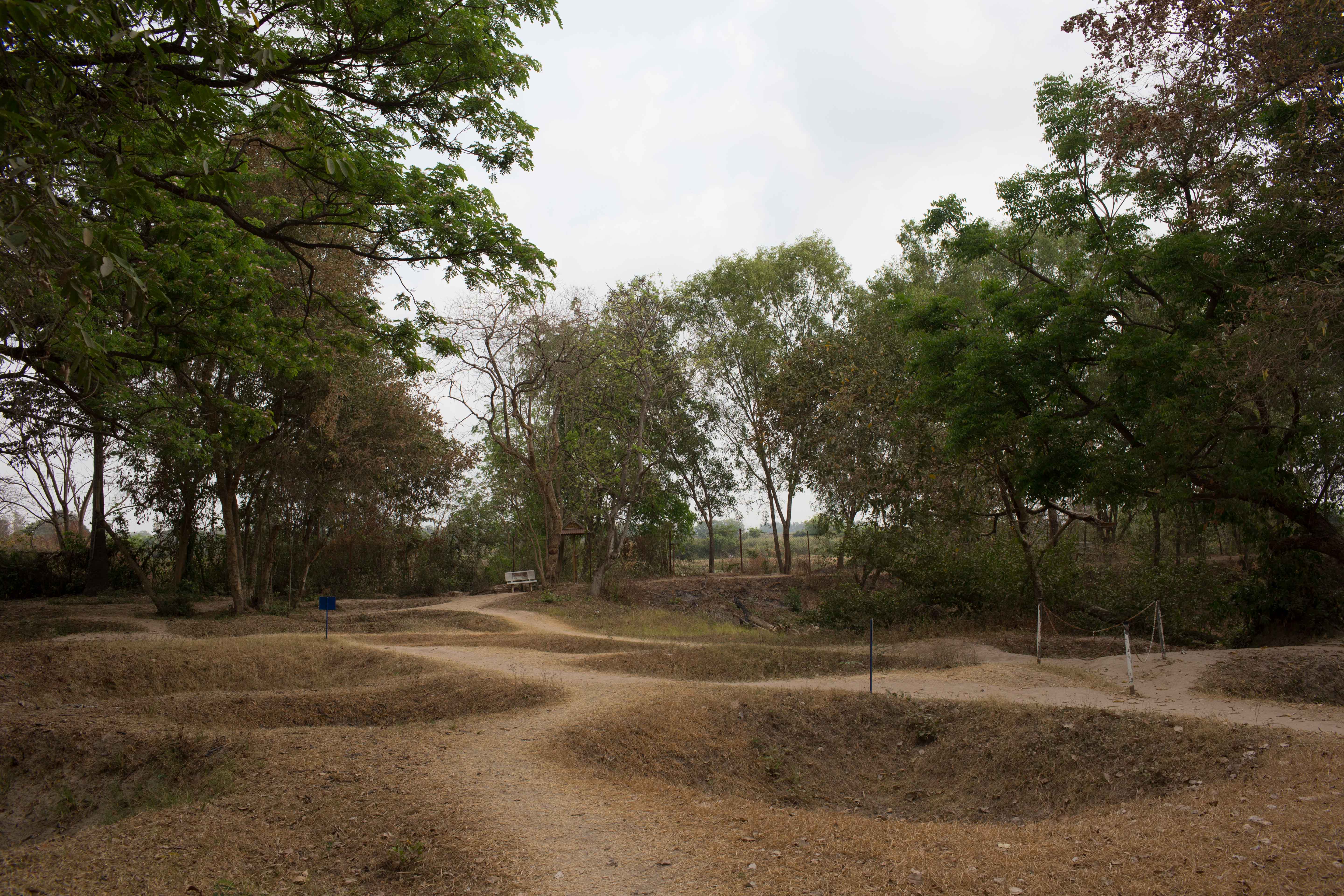 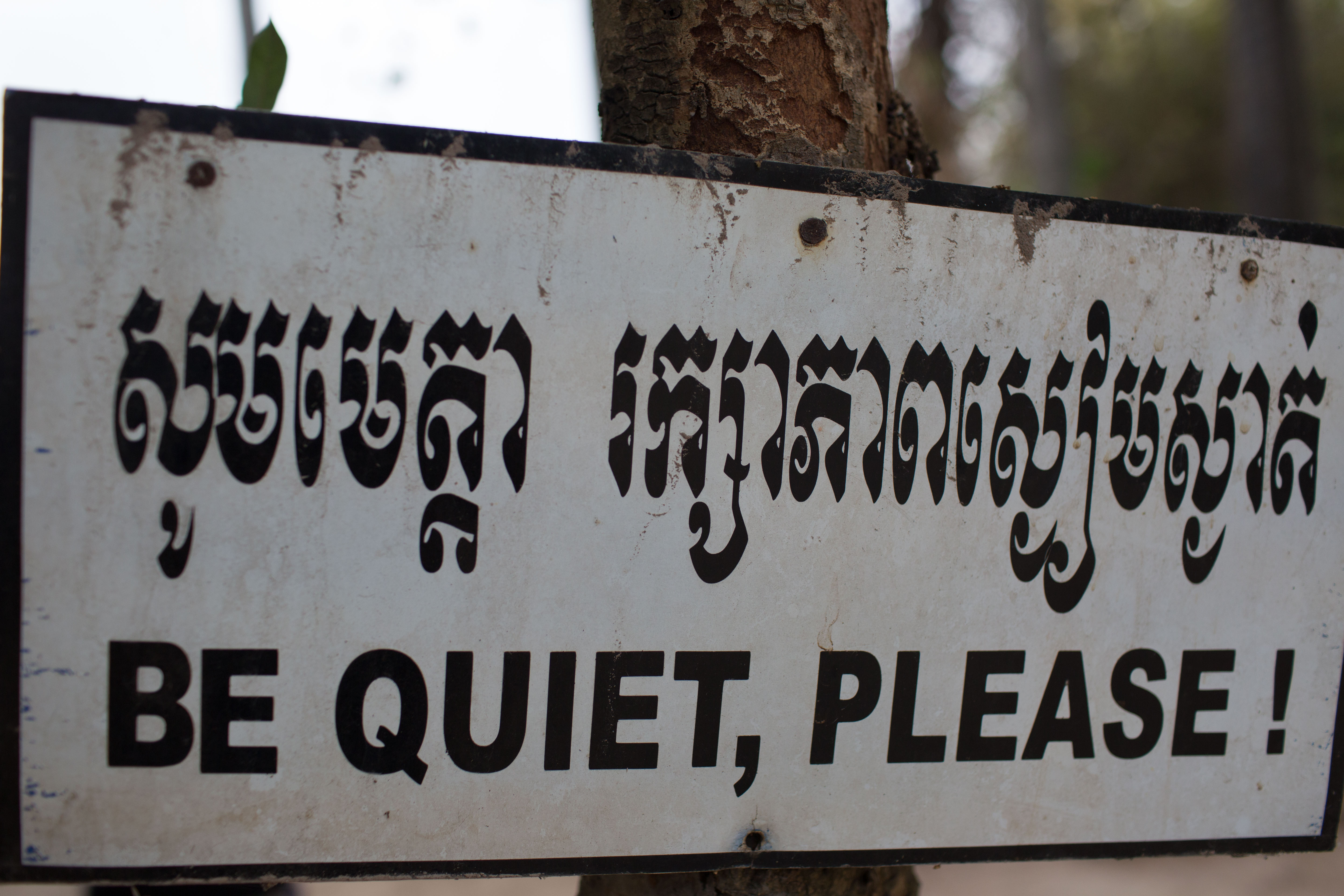 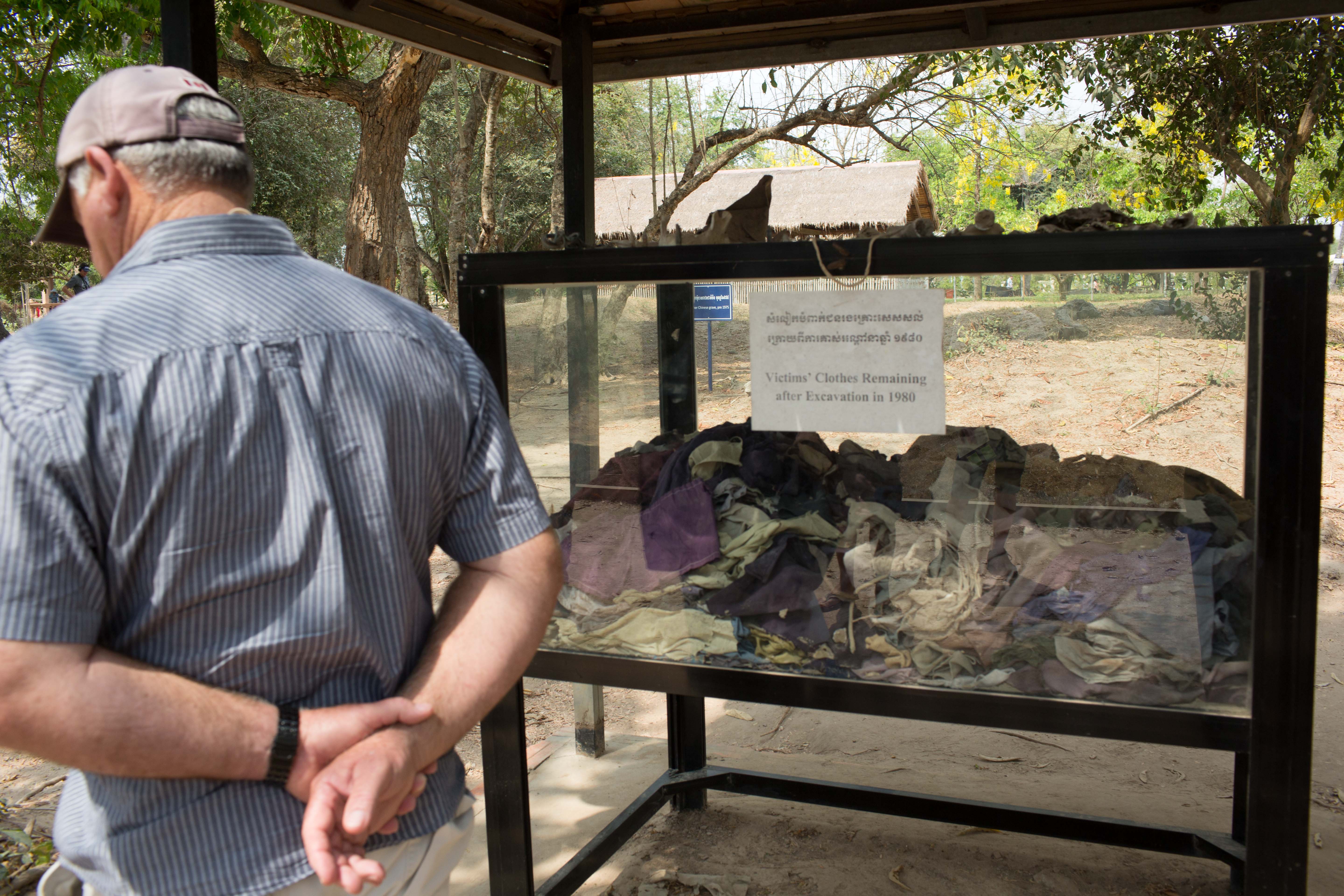 One of the mass graves that was discovered was filled with the bodies of children, foreign and Cambodian visitors alike made and left these trinkets to comfort the souls of the children. 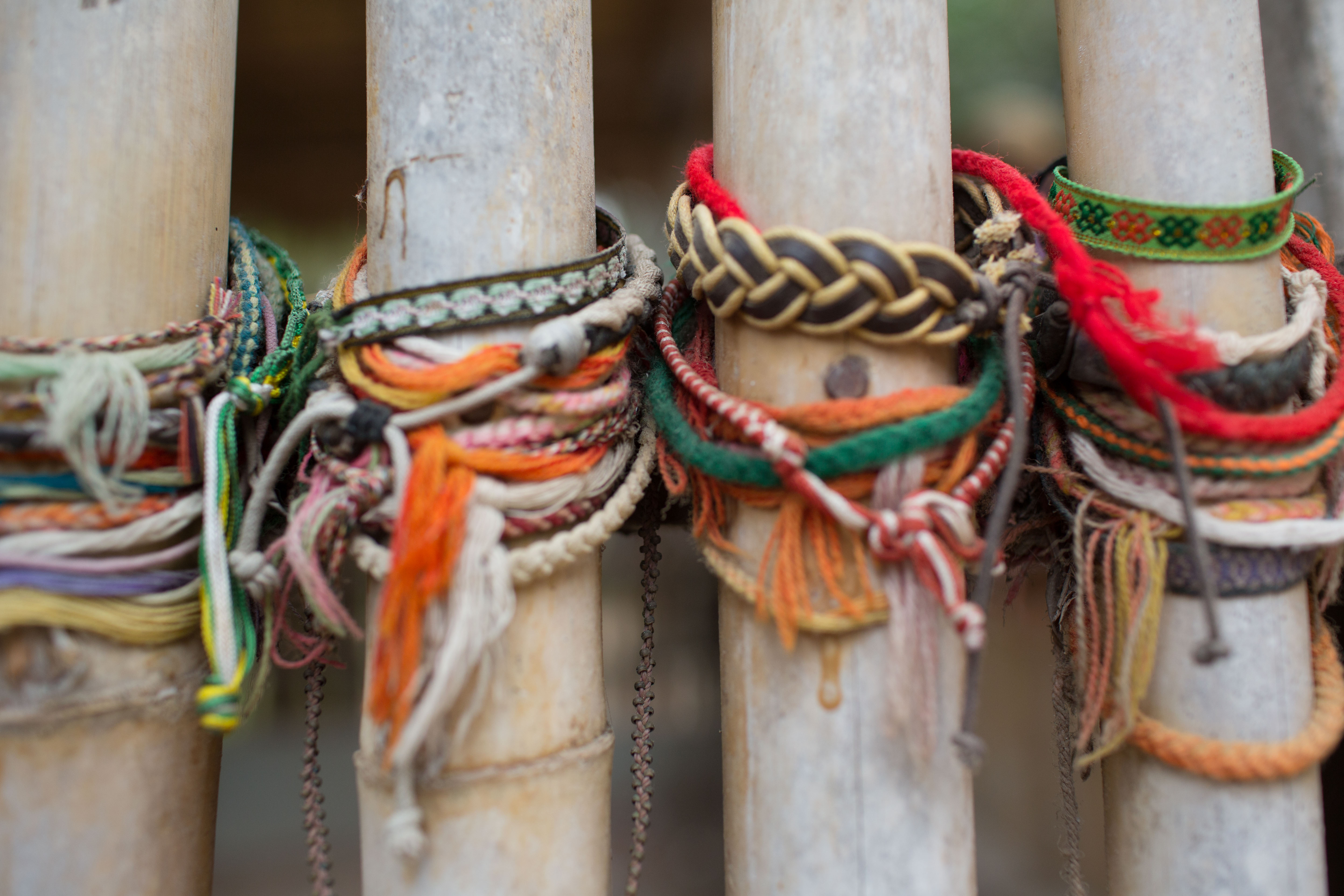 I don’t know anyone who looked like they walked away from visiting Cheong Ek unchanged.

Here is the video I shot during the tour of  Choeung Ek in 2005.

After the visit to Choeung Ek, we went back to the bus and arrived at the Teol Sleng Prison 45 minutes later.

Teoul Sleng, named after the poison fruit that grew on the trees there, was a former high school outside of Phnom Penh, which ironically Pol Pot was a teacher.  It was turned into a prison and interrogation center by the Kmere Rouge.  To weed out the people the Communist Government believed were subversives and attempting to undermine the revolution.  During the Khmere Rouge reign as estimated 17,000 – 20,000 inmates where processed, housed, and tortured until they confessed here.

When the Vietnamese army took control of Phnom Penh in 1979 only 9 people where left alive. 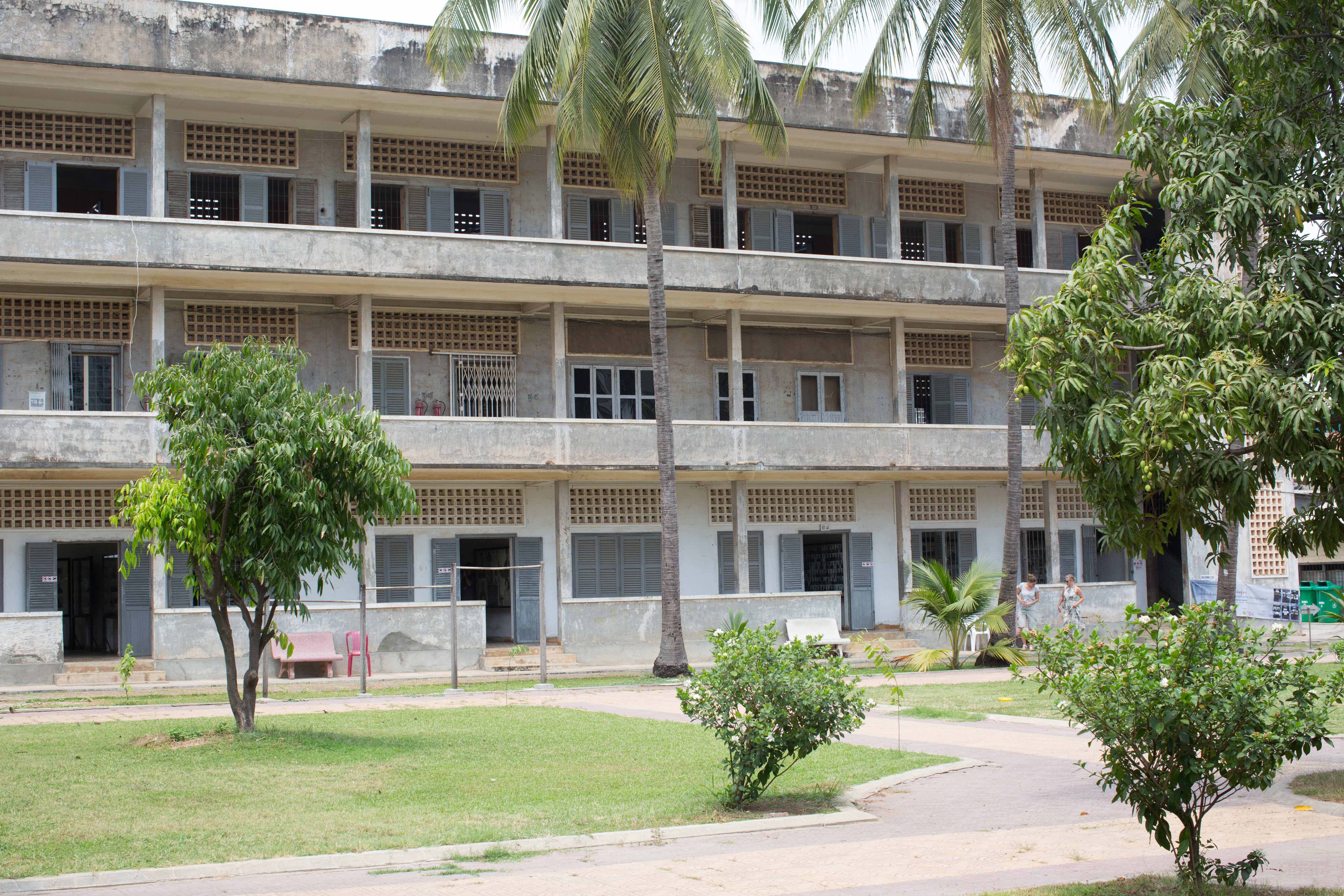 The complex consists of 2 3 story buildings, surrounded by high walls with electrified razor while.  You can see the complex rules imposed by the guards here. 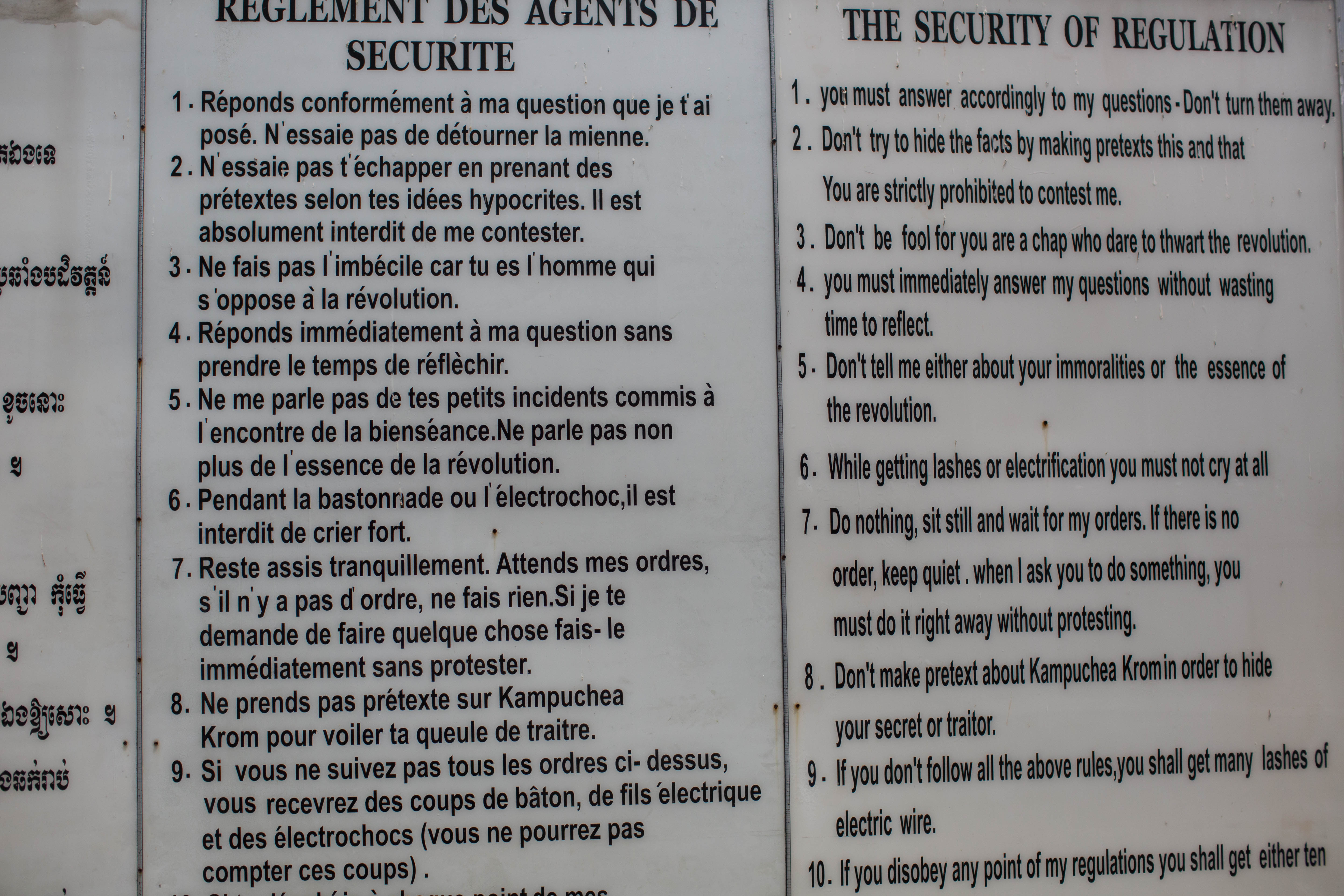 When I was here in 2005, the upper 2 floors had barbed wire to keep inmates from attempting to commit suicide.

In the courtyard, we can see the remnants of the students exercise equipment, that was used during interrogations to extract information.  Prisoners would be hung upside down, and lowered into clay pots full of fetid water, and left that way to point of passing out. 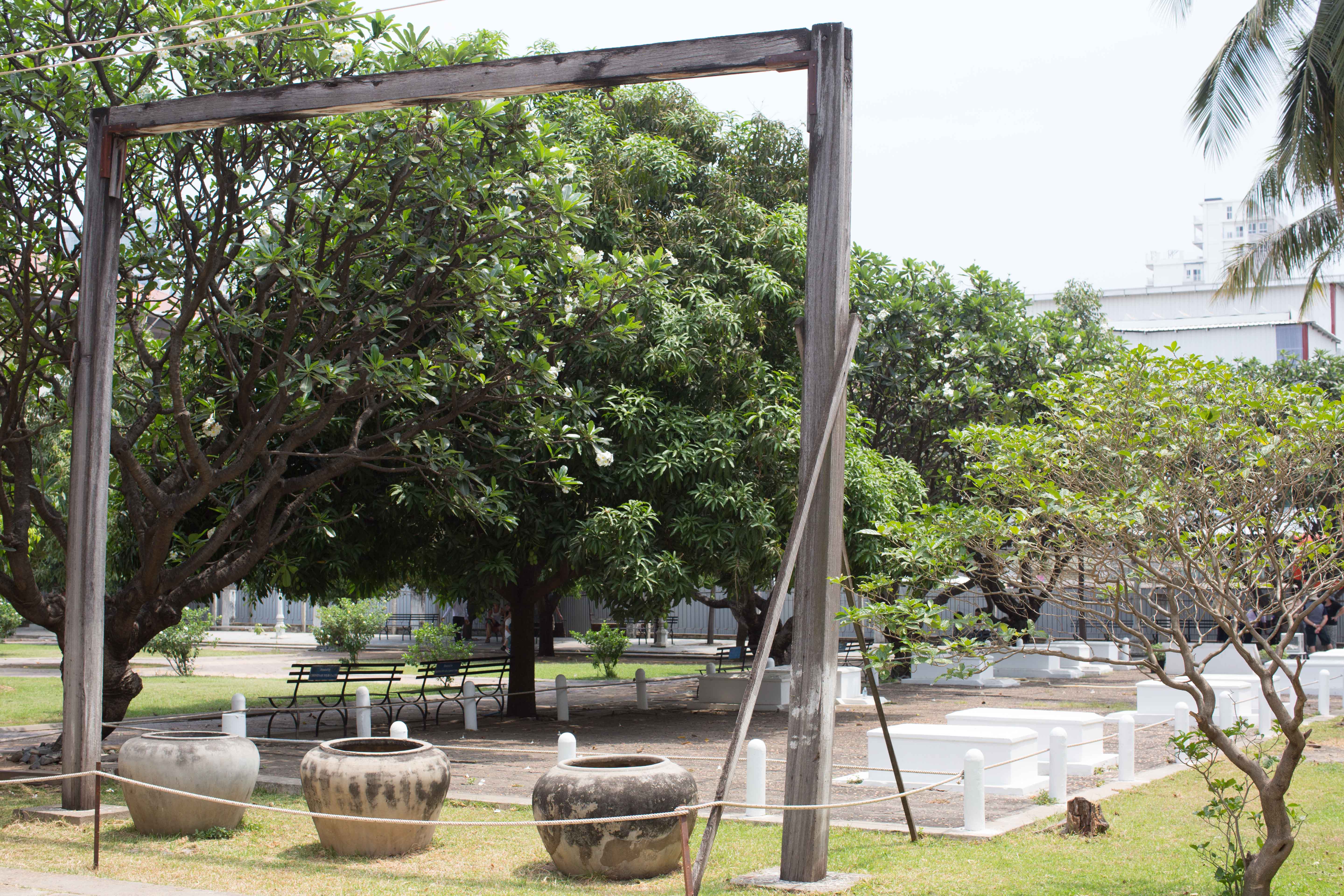 Prisoners remained shackled in the converted classrooms, full of other inmates, and could not move.  Other prisoners where kept in isolation on the upper floors, in tiny cells.  Where they would remain until brought down for torture and interrogation..

One of the last things that you see in Toel Sleng is the pictures that were found of the inmates processed and executed at the facility.  The Khmer Rouge photographed and made extensive documentation of each prisoner.

Though it was hard seeing this again, I am happy that I finally found a way to present these videos, where I never was able to find desire to sit down and put the segments together in a cohesive story.  I chose Don Ho’s Imagine, as a tribute to Viet Nam for liberating the Cambodian people from the Khmer Rouge in 1979.

After out trip to the genocide museums we went to lunch at an up scale Cambodian restaurant, where myself and several people did not find to be all that special.

Our next stop was the Royal Palace Complex, where we where able to see how to Royal Family lived in Cambodia.  I found out something about the constitutional monarchy that I did not know before.  The king of Cambodia is actually elected, by a select comity.  When I heard this, Monty Pythons Quest For The Holy Grail kept running through my mind. 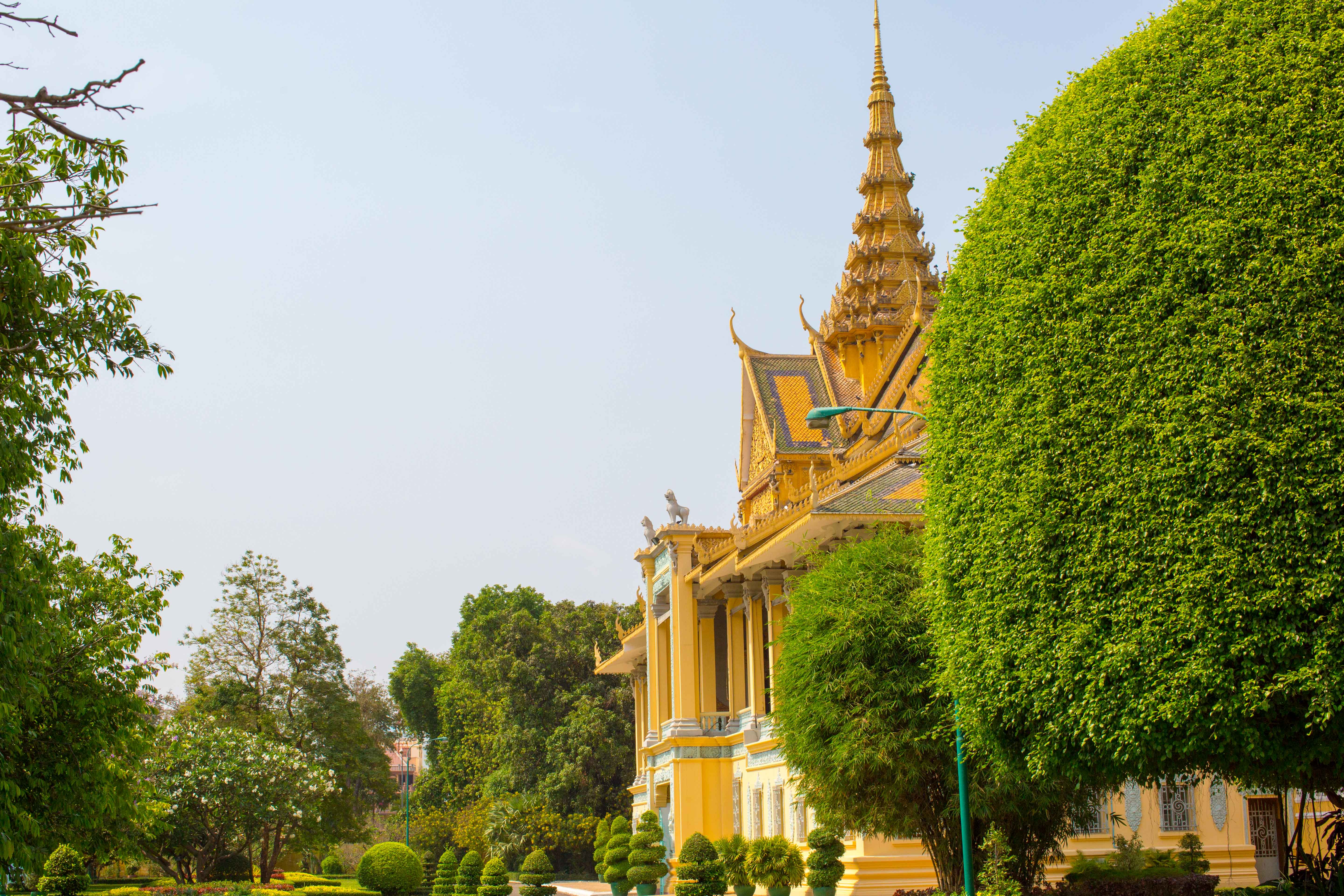 I really liked this fern tree that grew on the property. 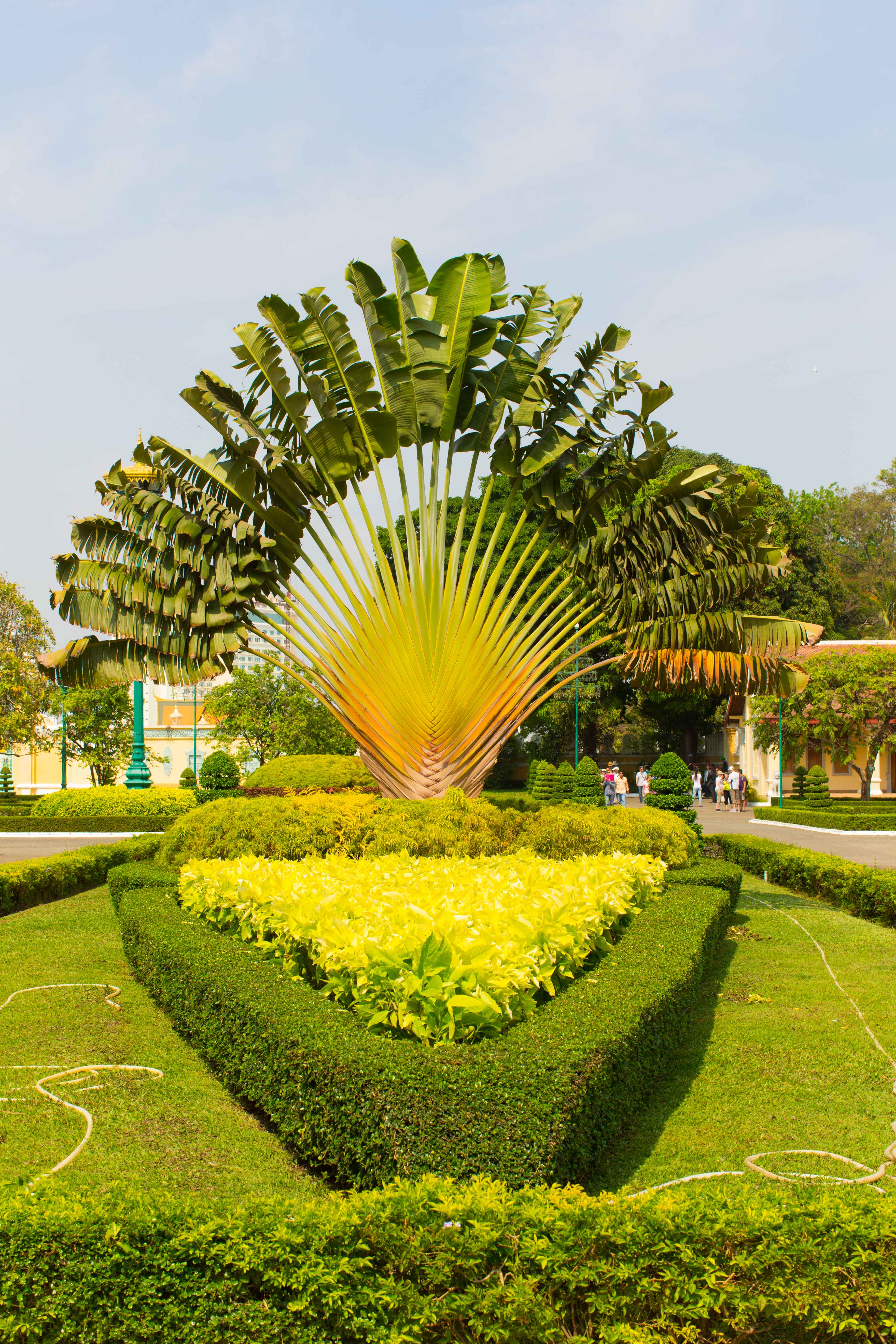 One of my favorite buildings in the complex was The Silver Pagoda, which had a floor made entirely out of silver plates.  The outside of the building was so big it was really hard to photograph, even at 35mm 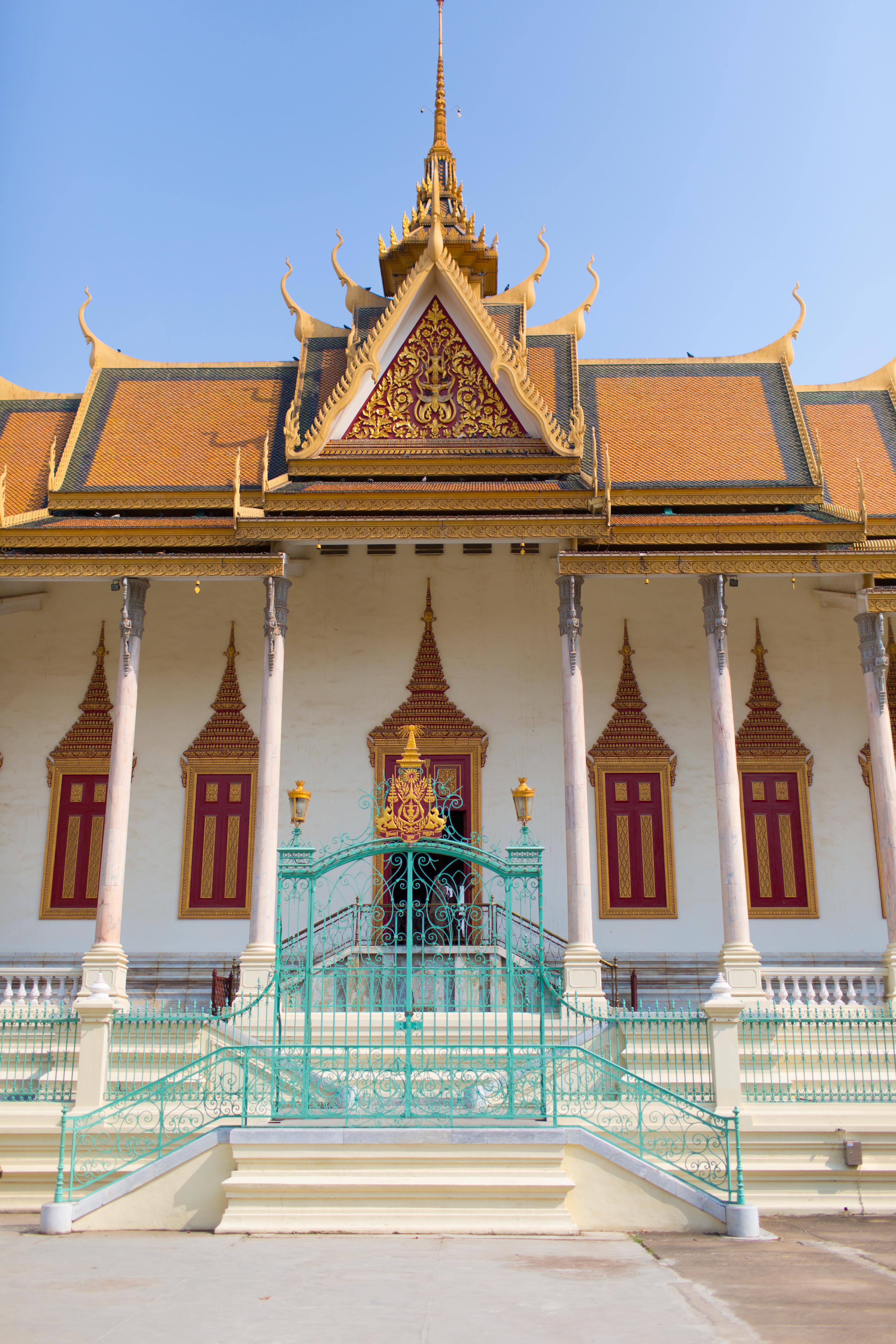 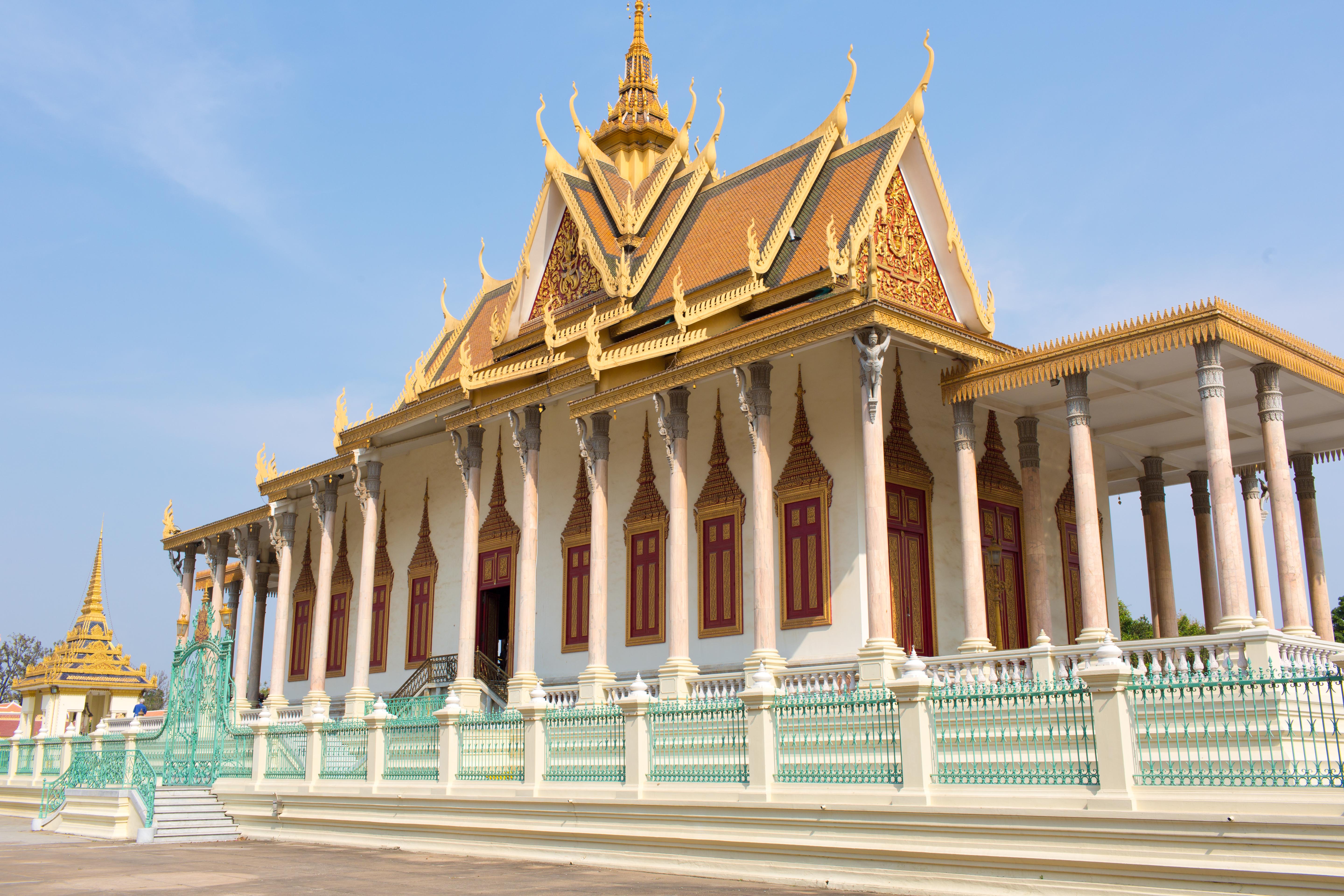 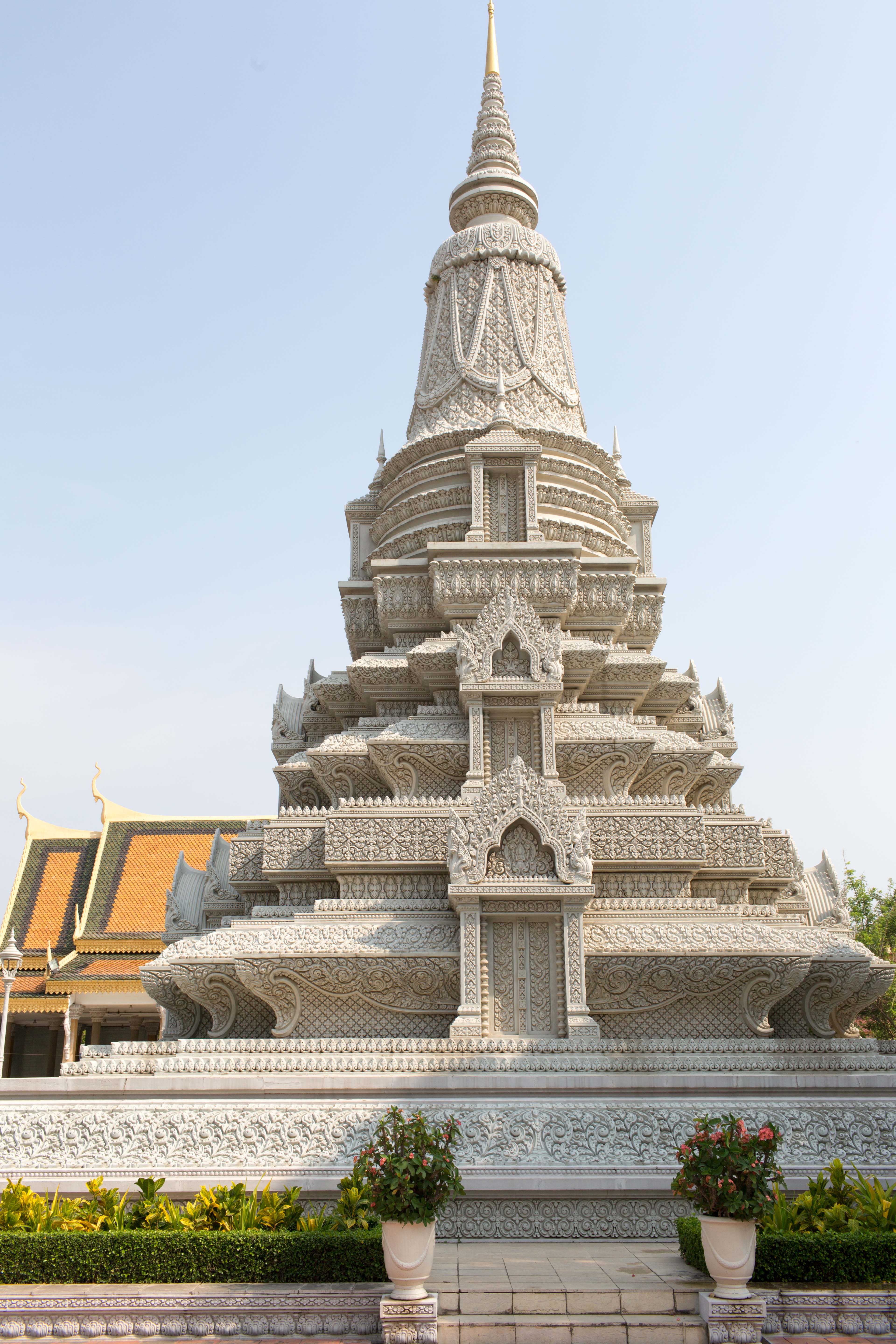 Our final visit of the day, was to the National Museum of Phnom Cambodia.  Where we where able to relax and observe traditional Khmere crafts through the ages.

After the Museum, we all boarded out Cambodian Cyclo’s to head back tot he ship! 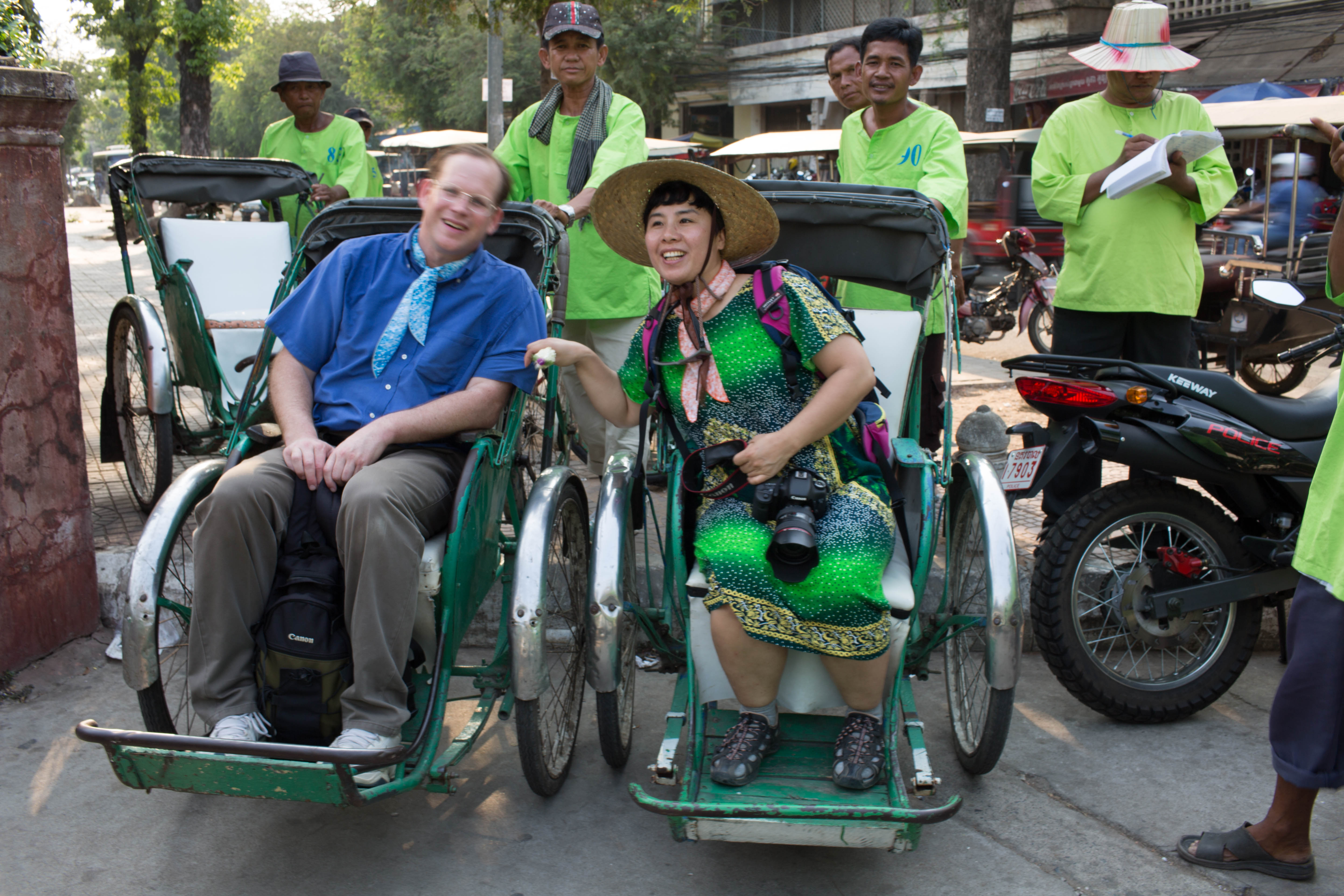 It was allot of fun, being peddled through the streets of Phnom Penh in our very own pedi-cab! 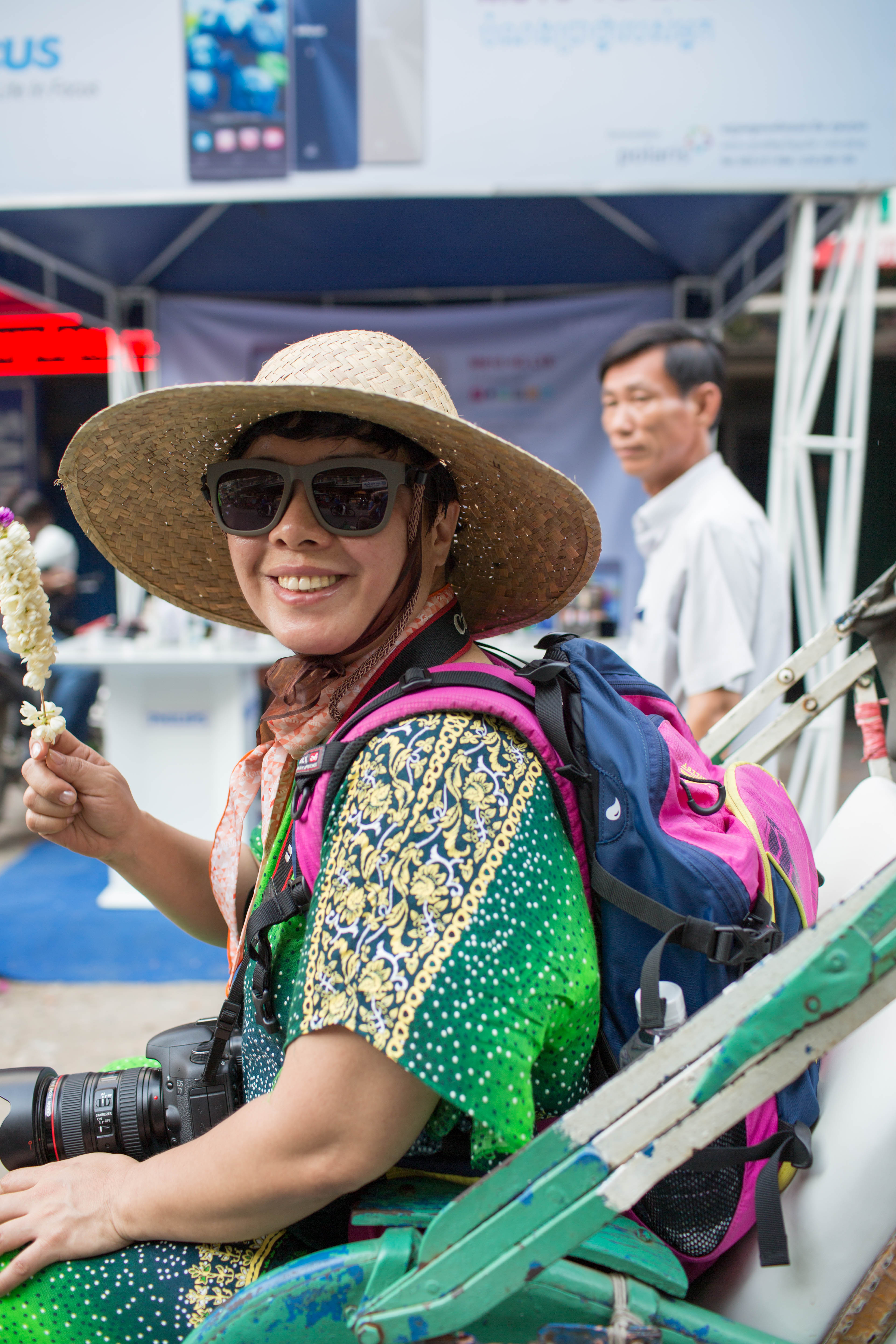 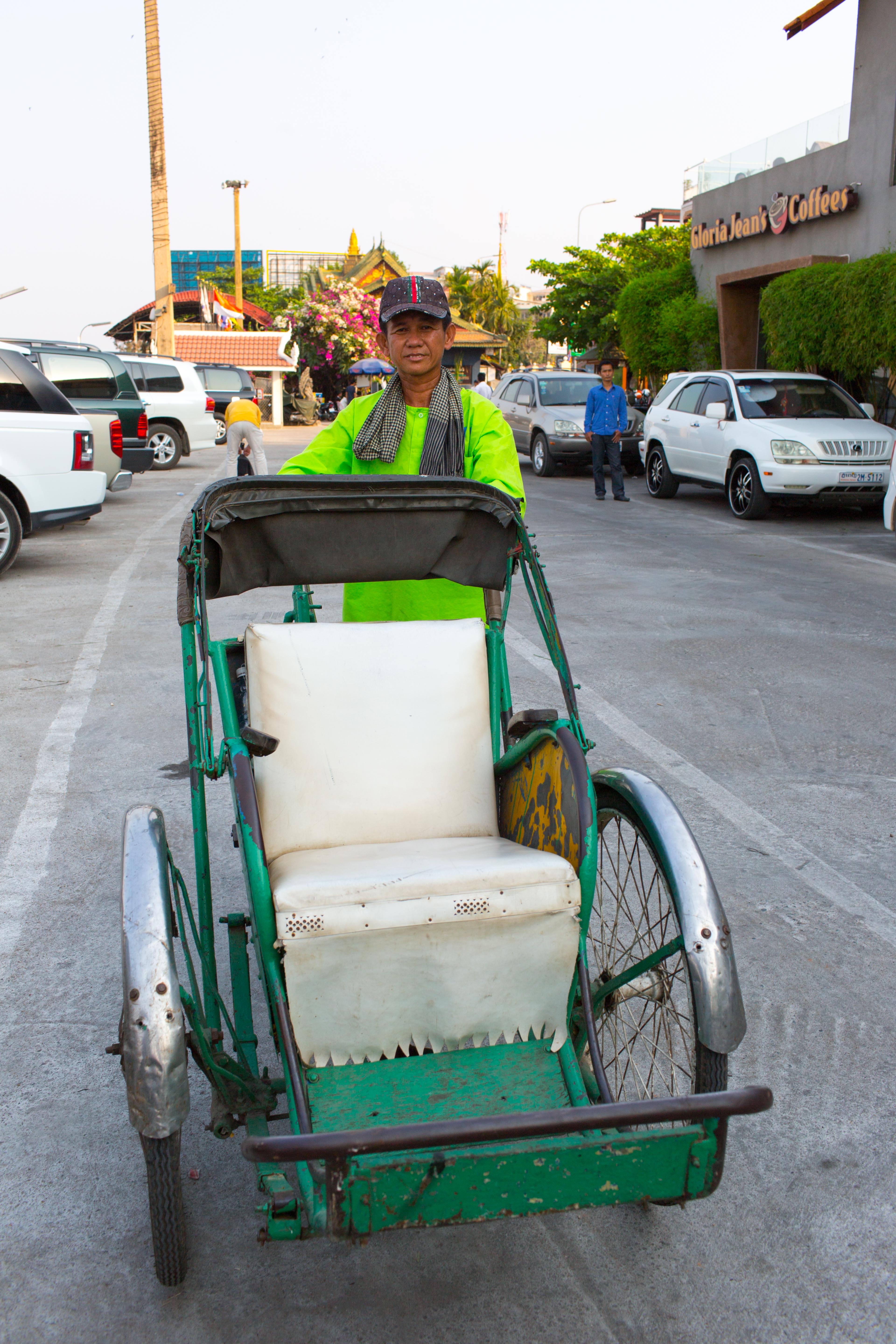