↓
Home→Technical→NO CARRIER! The Lost World Of The BBS

NO CARRIER! – The Lost World Of The BBS

“Radio Killed The Video Star.” Or in this case the Internet killed the BBS SysOp, in one of my first blog posts (On the original Windows IIS blog), I mentioned that I used to be a BBS System Operator, known as a SysOp.

What is this BBS I speak of?  Before your phone or cable company offered to give you a permanent connection to the internet via DSL, or CABLE.  There were generous people like myself that would sacrifice one of their computers to allow you to use a device called a modem, that connected your computer to a plain old telephone line that allowed you to call another computer running specialized  software to exchange e-mail, post public messages, play simple text based games, or trade the latest in public domain or pirate software.

This specialist software called a  BBS program which in my case was the premiere BBS package for the Commodore 64 called IMAGE BBS v1.2. The software came on a double sided disk which held 170k per side. That is 340Kilobytes, not megabytes or gigabytes! This may not seem like a lot these days!, but for its day, it was a HUGE program.   I first went online with a 20MB Lt. Kernel Hard Drive, and later upgraded to 105MBs.  Again in 1993 on a Commodore 64 computer this was HUGE!  Not to mention expensive.  Used, the 20MB hard drive system cost $350.  Brand new would set you back about 750.00!

The modem connected the computer to the telephone line and transferred data at a maximum speed of 2400 baud, which meant 2400 bits per second. Or 2400 divided by 8 is a whopping 300 bytes per second. Think about this.  An extremely SLOW internet connection would be over 3,000 bytes per second.

One of the really cool things about a BBS that I feel has been lost with the internet, is that each system had it’s only theme, focus, and in some respects it’s own personality, depending on the SysOp, who the “regular” callers were, and the main focus of the BBS. Each system took on it’s own unique personality.  Additionally for those that called and posted regularly it because a mini online community.

I really enjoyed running my BBS, and made several long lasting friends throughout the experience.  It also taught me how to support my users, and taught me a great deal about programing in  Commodore BASIC, it was allot of fun writing small programs and making modifications to the system.

There are several IMAGE BBS systems still being run today, accessible on the internet through TELNET. One of the most popular IMAGE BBSs in San Diego back in 1994.  Commodore Image is online at cib.dyndns.org 6400.  You can access it either through a normal TELNET client using ANSI COLOR and IBM graphics or through a PETSCII terminal emulator called CG TERM.

I thought it would be fun to interview some of the people that ran  Image BBS systems for the blog, I received replies from Larry Hedman (X-Tec of Commodore Image),  Eric Lamb of Buccaneer’s Den (not currently in operation.), Ryan Sherwood (PINACOLADA), who also is the founder and moderator of the IMAGE BBS group on Facebook, and Al LaRosa (Of Bucko), who is chalk full of history and trivia surrounding Image BBS, and New image Software.

Larry: I first started telecommunicating on a Commodore 64 with a VolksModem at 300 baud. I used it for calling Bulletin Boards I found listed in Commodore magazines that I subscribed to which were Compute, Compute’s Gazette and RUN Magazine. I also had an account on Q-Link that I called frequently.

Eric Lamb: I had purchased my first computer, a brand new Commodore 64 when I was in 7th grade. A year or two later, an ad in Commodore Power/Play magazine (I believe) offered a package deal.  A VicModem running at 300 baud, and a free month of Q-Link for something a special price.  I had been reading about modems, Q-Link, and even the personal BBS for a bit, but had never tried it.  I ordered this kit.  As this was an acoustic modem, I found that all of the cheap phones in our house wouldn’t work… I had to borrow an old phone from a friend, and I was hooked!  I used that 300 baud modem for at least a year, most likely longer!

Ryan Sherwood: I had a neighbor, Matt, who had a Commodore 64 and a modem (and two rooms full of Commodore and Amiga stuff). I don’t remember what type of modem it was, but it was probably a 2400 BPS modem. We used CCGMS and dialed local BBSes (in Washington state, the US) like Time Takers’ BBS, Oakbrook Express, The White House, and others.  The first modem I was able to buy for myself was an Aprotek Minimodem-C 24. I loved having all the LEDs on it, they were so informative. The first BBS I dialed with it was the Aprotek support BBS in Rogue River, Oregon. There I downloaded some SIDplayer *.mus files, but didn’t know you needed SIDplayer to play them. So I emailed the sysop, and thankfully he answered my question. I downloaded a version of SIDplayer and got that working. I remember doing a lot of early morning downloads in the summer because the long distance rates were cheaper. I got a neat version of Star Trek, and downloaded lots of little demos.

Al DeRosa:  First experience with a modem was a 300 baud Mighty Mo, I got it for Christmas as an afterthought when I bought my first C64.. I called Compuserve and was paying $6 an hour for using it..

Larry: I got the idea to start my own BBS from calling other boards.  The idea of running a BBS seemed interesting and at the time I was stationed at a Naval Air Station in Adak, Alaska.  There were no Bulletin Boards being run there so I decided to start one to see if there would be interest locally.  The interest was there, and I soon began receiving numerous calls from people with computers on the island.  That blossomed into forming a computer users group, eventually growing to about 60 or so members. I served as president of the Adak Computer User’s Group (ACUG) for about 2 1/2 years.

Eric Lamb: Once I discovered the world of the BBS, I made many local friends who ran one. I even was asked to SubOp on a couple of boards, my first SubOp role was helping a friend out who was running an Atari ST BBS.  I loved it.  I somehow convinced my parents into letting me have my own phone line (they hated me hogging the phone anyway) and I knew I had to run my own.

Ryan Sherwood: I liked the idea of the community it created. People would get together, write messages to each other, play games, try to date each other, read interesting text files about the Commodore and anything else you cared to put on the BBS. I wanted a piece of this action!

Al DeRosa: Paying $6 an hour for CompuServe, I called a local BBS and I was hooked. I NEEDED to run a BBS.

Ryan Sherwood: No. While I was saving up to buy Image BBS, I downloaded some other smaller BBS programs, just to see what they were like. I tried Fantasy Role-Playing BBS, C*Base, one I think was called “Micro-RAM BBS” (entirely contained in RAM, when you wanted to save messages, you broke out of the program and saved it), and some others.

Al DeRosa: I first put my BBS up on November 22th 1986, I ran CNet 10.0 (Pirated of course) then when I decided to put the BBS full time I bought a copy of CNet 11.1a from Perspective and ran it until 12.0 came out, when 12.1 and the debacle of that came about I followed Dan Gladden and Fred Dart to New Image.

Eric Lamb: Yes! I was a rebel back then…

Ryan Sherwood: Yeah, it was pretty common back in the day, and especially after I got Dragon’s Eye on telnet in the 2000s, people would upload copyrighted/pirated stuff. I did a lot of pirating myself, I guess, by calling long distance BBSes. There were no Commodore retailers anywhere nearby. Later on I discovered Tenex and started buying things through the mail

Al DeRosa  At first yes, but then I got scared and took it all off.. 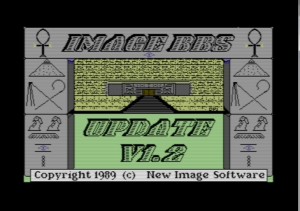 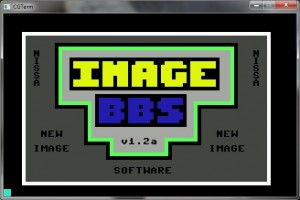 The SysOp has spoken (BBS News) 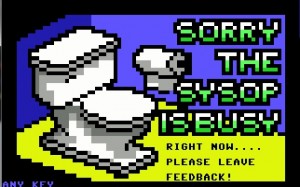 Custom Graphics Screen, letting me know the SysOp was not available for chat. 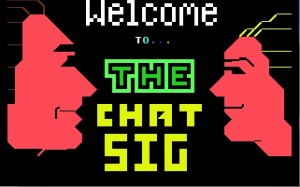 Title screen for the message bases – The Heart of a BBS 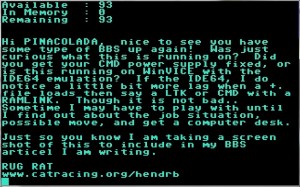 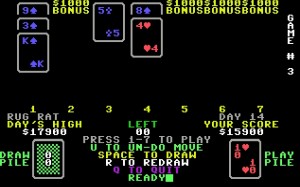 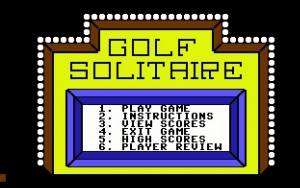 Golf Solitare, one of the many colorful games available for IMAGE BBS

Myself and my fellow SysOps had allot of fun and immensely enjoyed the opportunity to interact with the people who called our systems, it also taught me valuable skills that I still use today in my work as a system administrator!  Being a SysOp was hard work, sometimes very frustrating, and other time allot of fun!   I would like to thank Larry Headman,  Eric Lamb, Ryan Sherwood, and Al DeRosa for also sharing their experiences.   If you would like to download a copy of Image BBS v1.2a, and look at it on VICE.  Both disks are available here.

Please give Larry’s BBS a try at telnet://cib.dyndns.org:6400