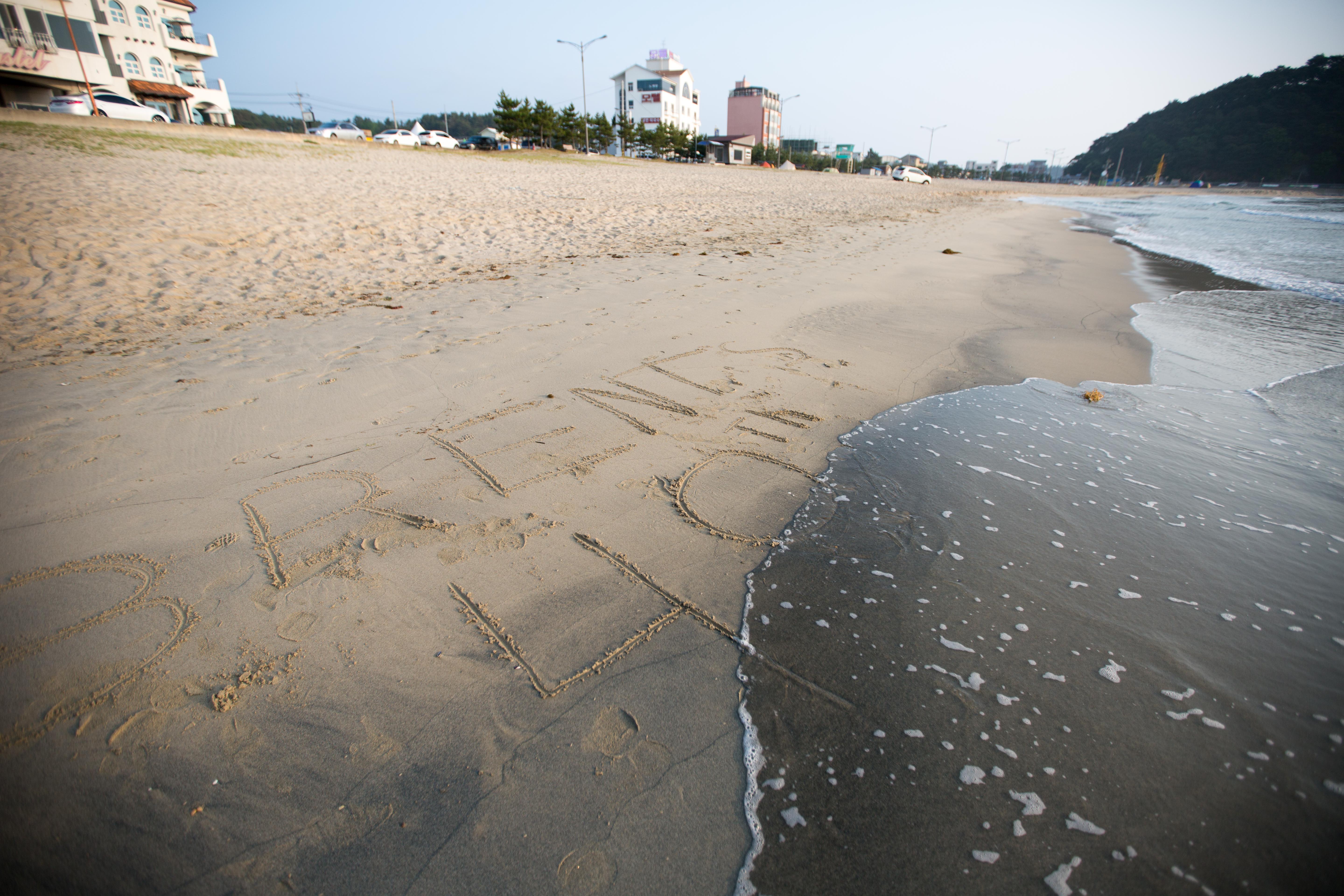 Well it was bound to happen sooner or later, and this year it did. I have now officially reached Middle Age. Which reminds me of the Saturday Night Live Skit. ‘Middle Aged Man’, all I need now is my sidekick ‘Drinking Buddy’. So what does an expat do to celebrate such a milestone? Well if you’re a displaced San Diegian with a photography addiction. You get all your camera gear together and head for the beach!

I had made reservations at a spa “pension” on the East Coast of Korea in a seaside town called Yangyang, in Gangwando province, which is about an hour and half north of Donghae, and Samcheok (See the articles http://www.catracing.org/hendrb/korea-samcheok-railbike-2/ and http://www.catracing.org/hendrb/korea-chuncheon-railbike/) to read about our previous trip to Donghae and Samcheok in May of 2013.

A pension is a type of lodging in Korea that offers special amenities to attract guests, (In our case it was our own private full sized Jacuzzi in our room. Some other pensions offer themed rooms, or swimming pools, outdoor fireplaces, etc.

We stayed at the Bonita Spa Resport (http://www.bonitaspa.kr/), which was located right on the water, by the little fishing harbor of Inguk. There was a really nice beach, with small waves and a picturesque breakwater and fishing village. 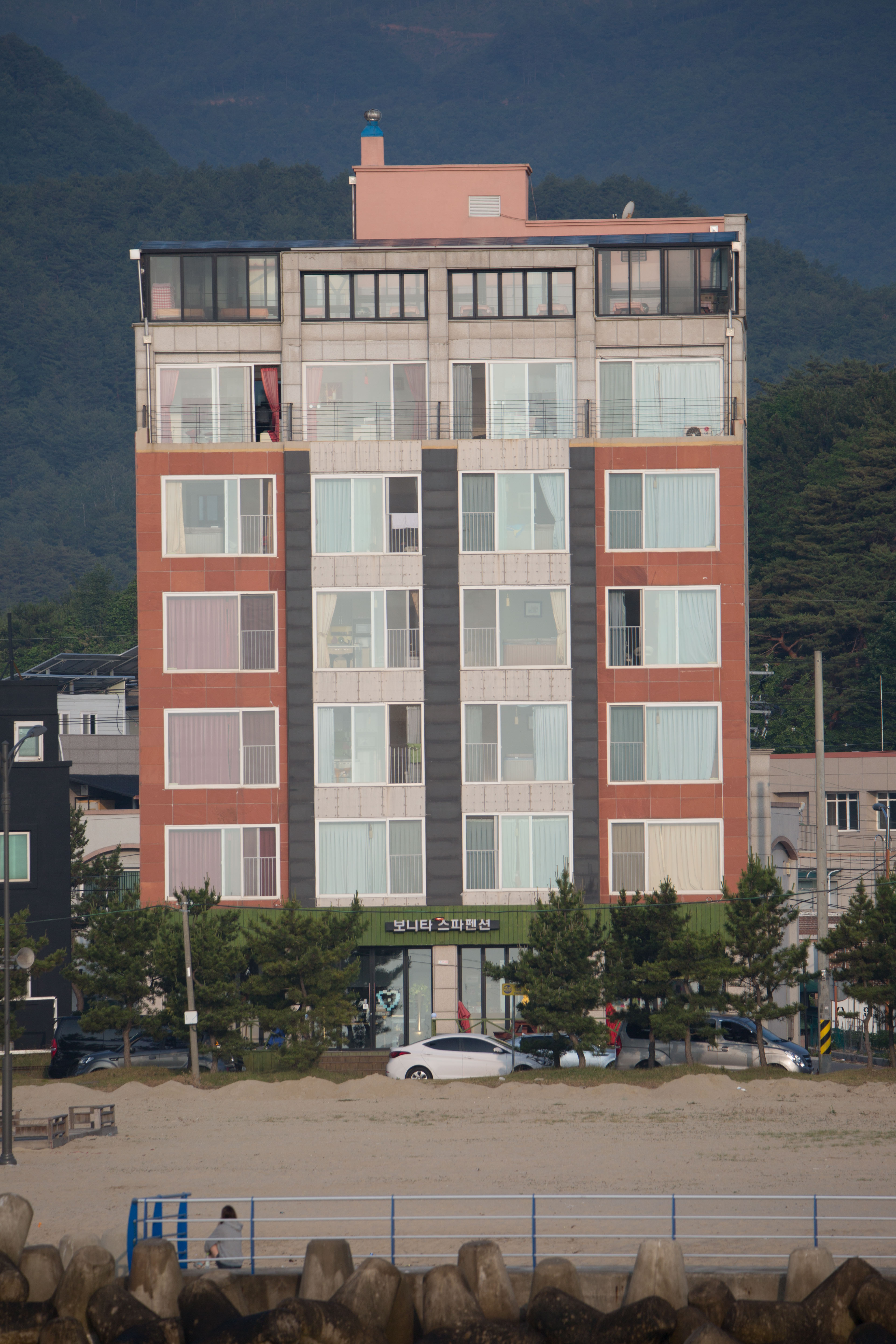 On the first day we got up early and took a walk on the beach in front of the pension, this was a great time to get some great pictures!

Here is a sea star that we found on the beach. 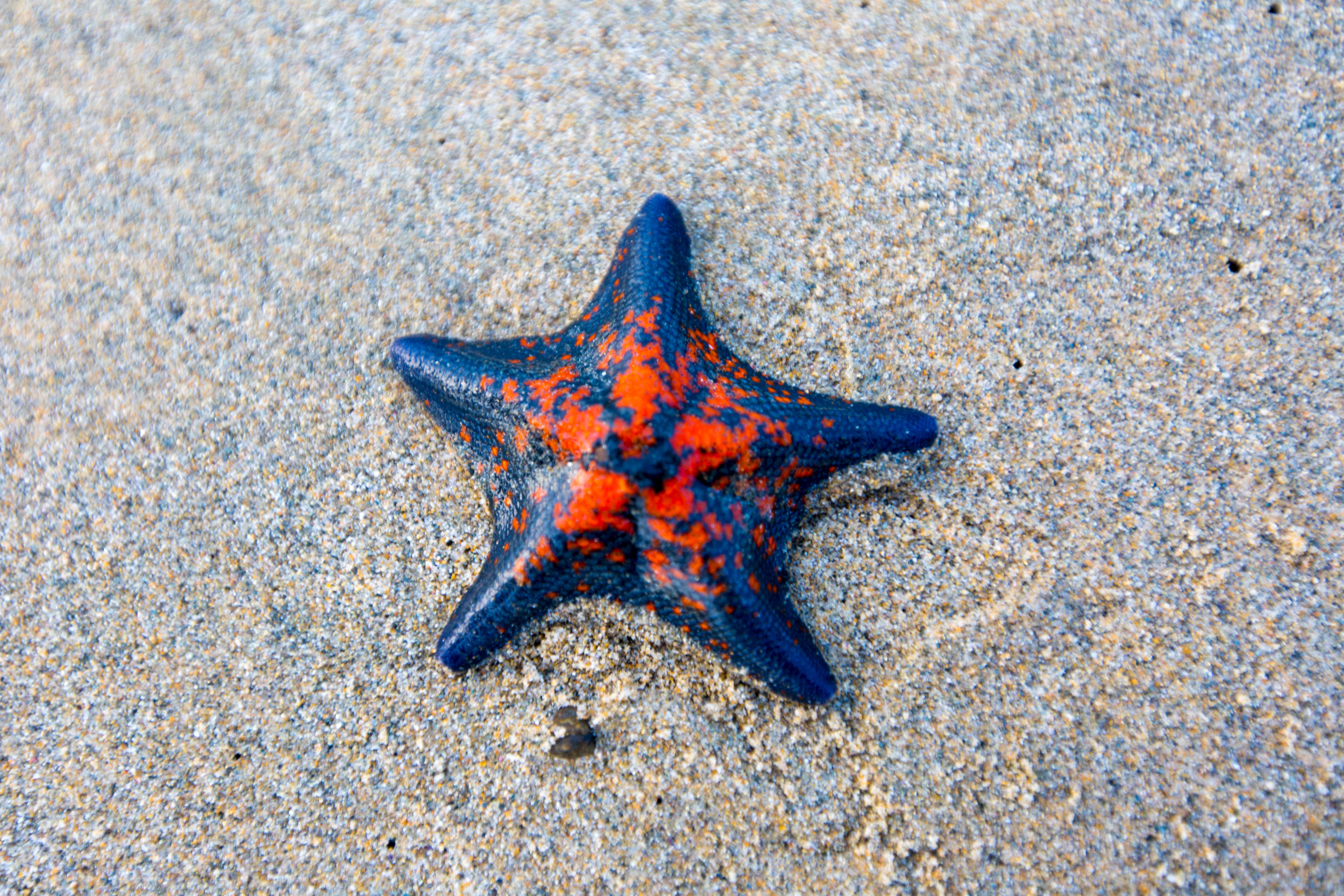 A couple of Koreans were out fishing in the early morning. 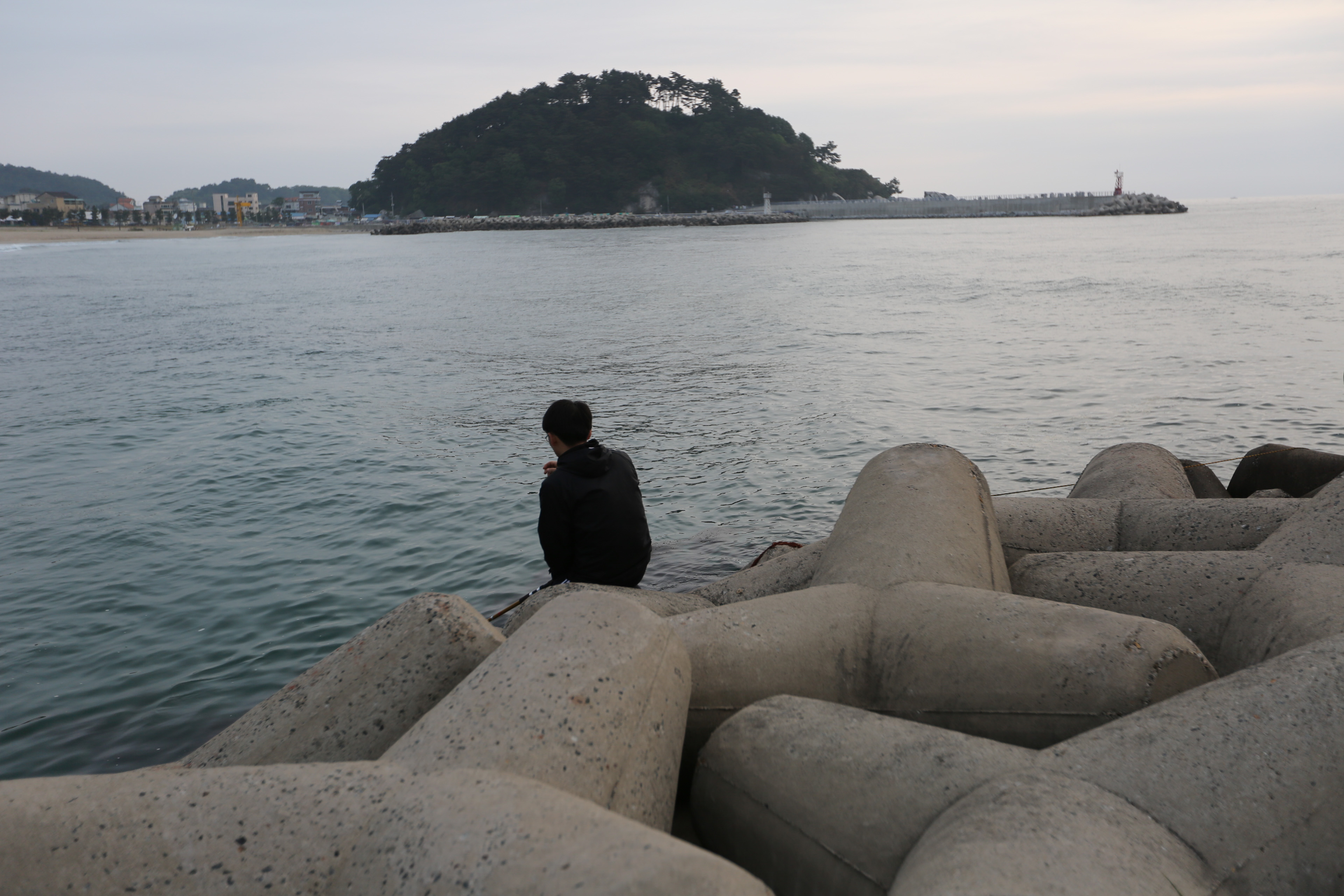 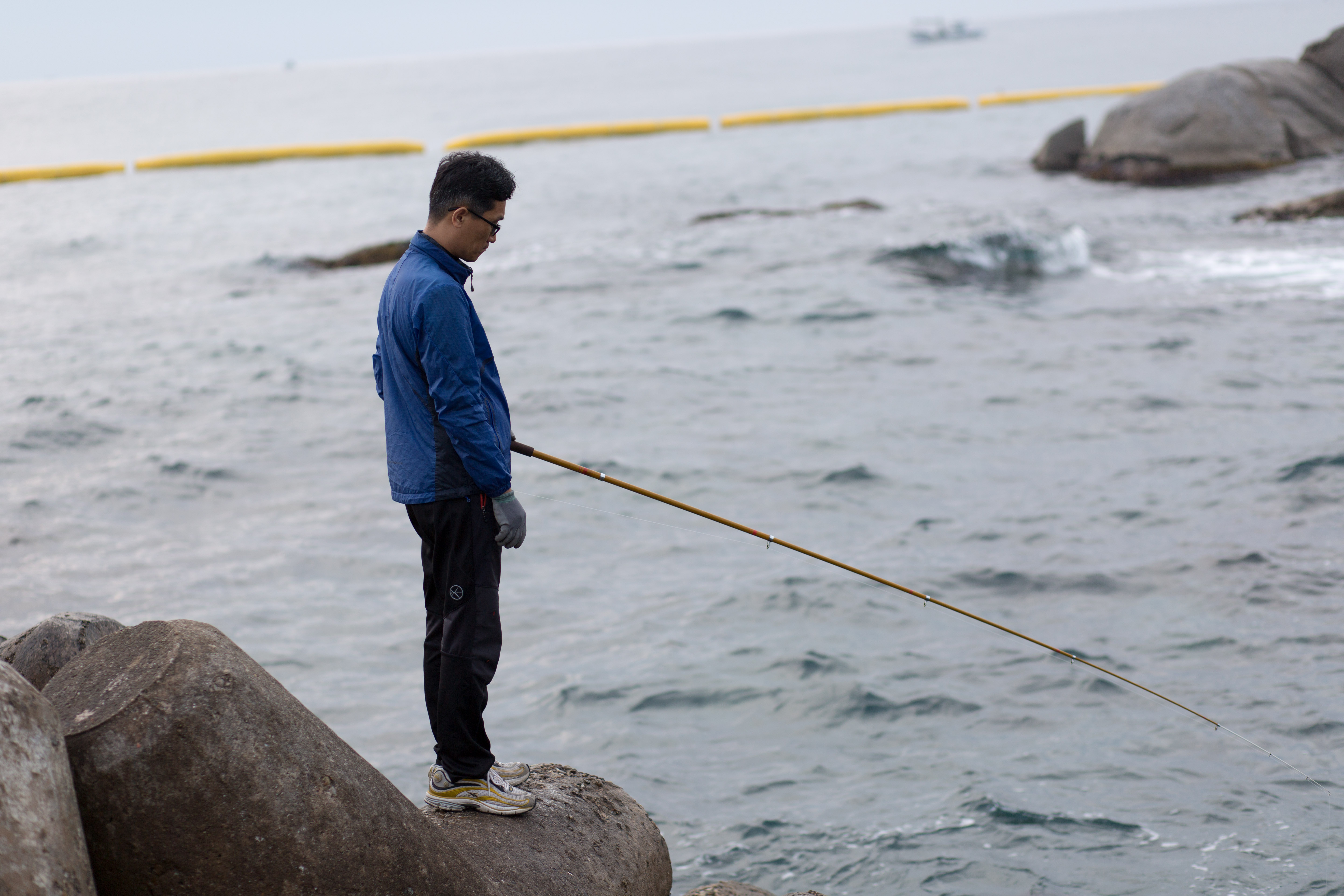 Usually there are not very big waves in Korea, but here is someone out having a great time anyways, at 6am. 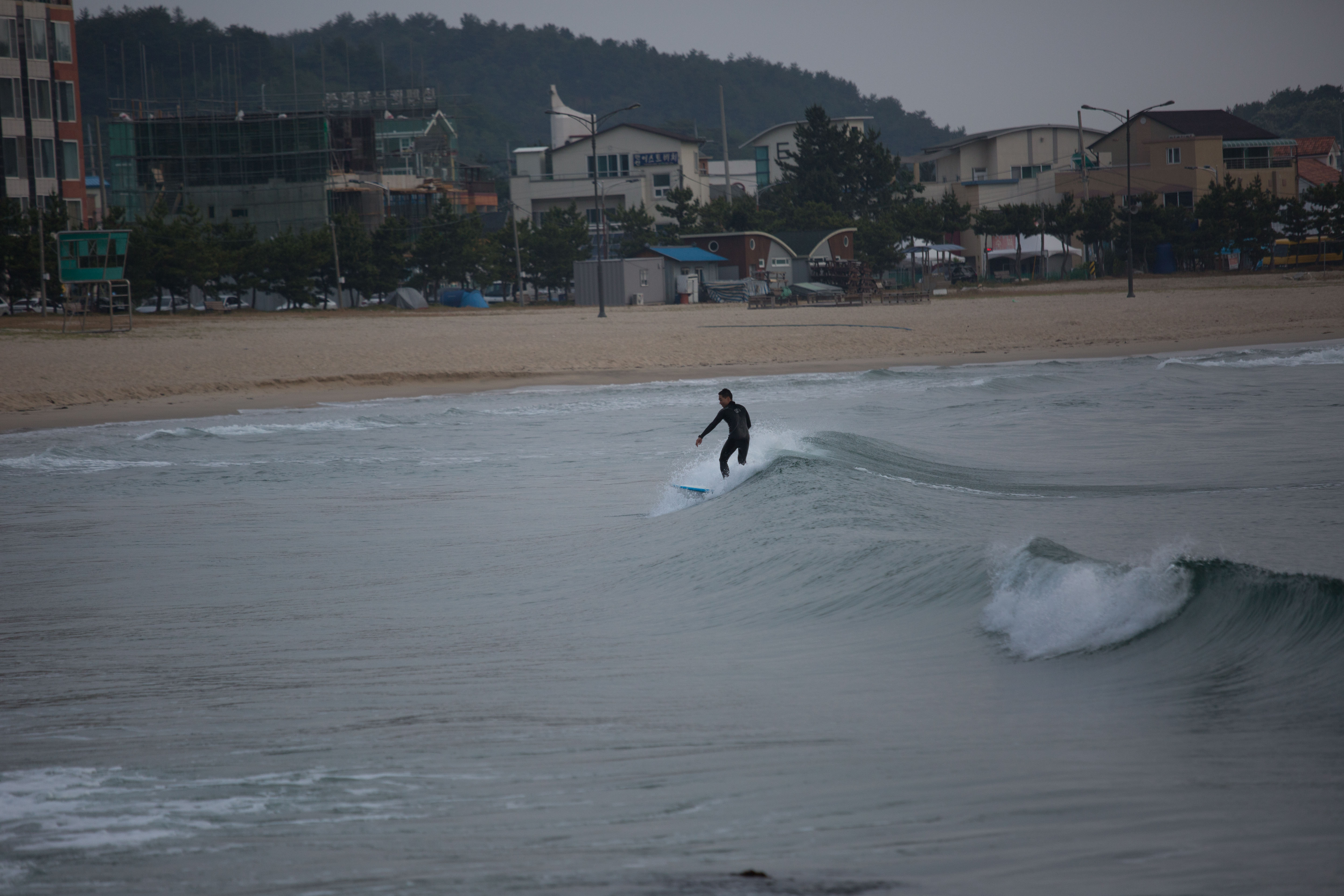 There are temples at both sides of the beach, this morning we walked towards this one. They some very interesting statues, this is the first temple I have seen where a statue is holding wealth (In this case a bar of gold.) 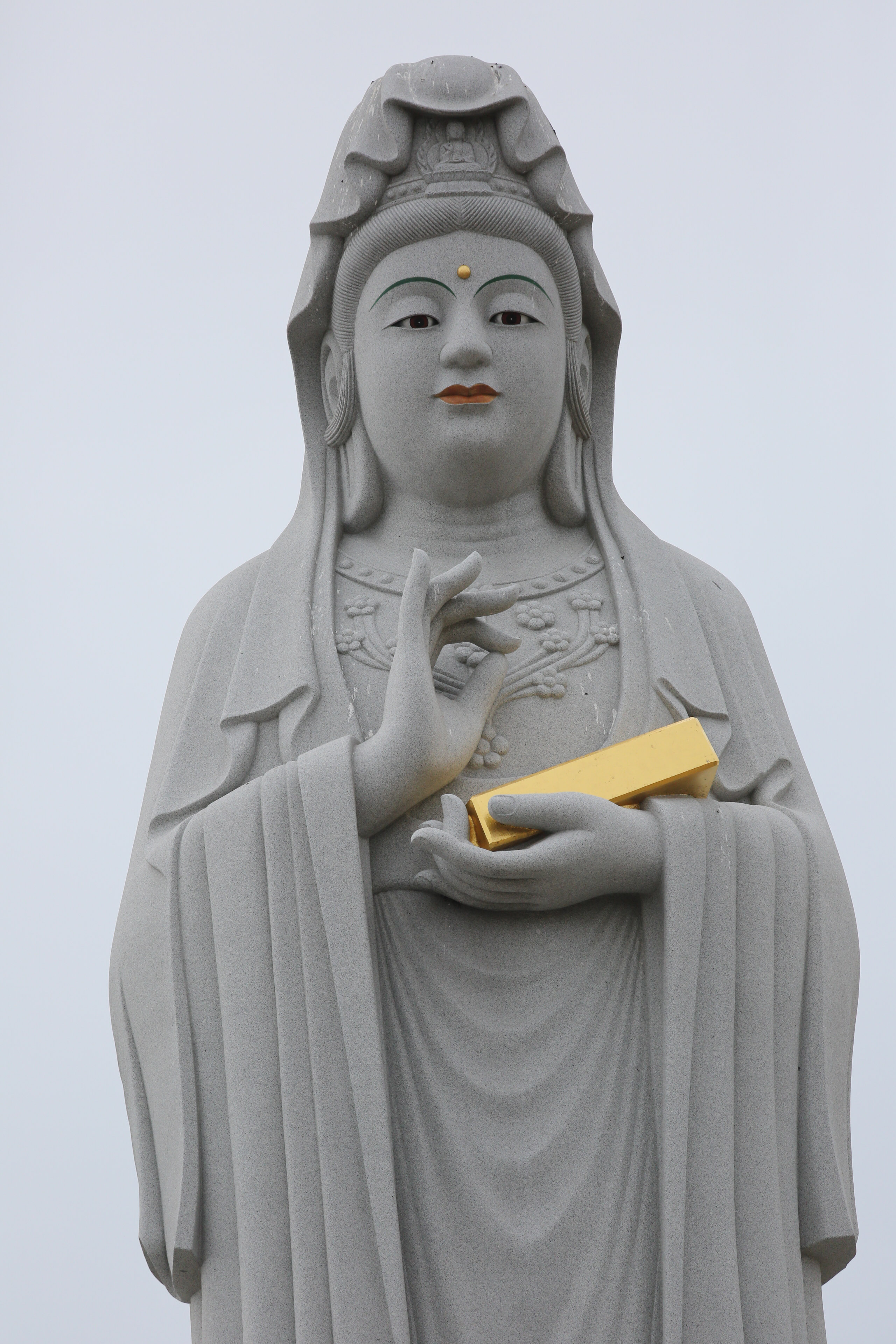 I know it is good luck to rub Buddha’s belly, I wonder what the spiritual implications are of copping a feel (Or giving poor Buda a purple nurple.) 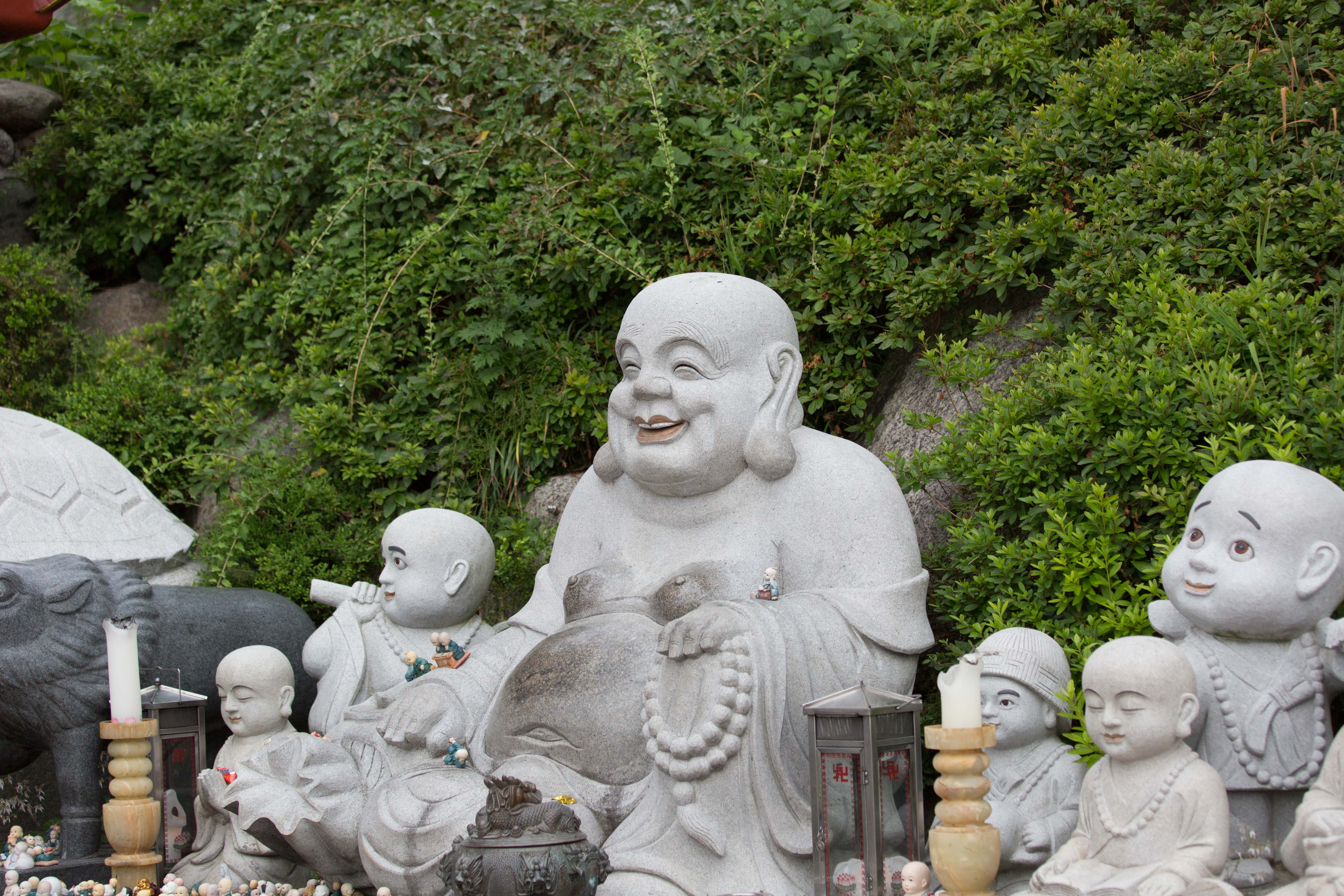 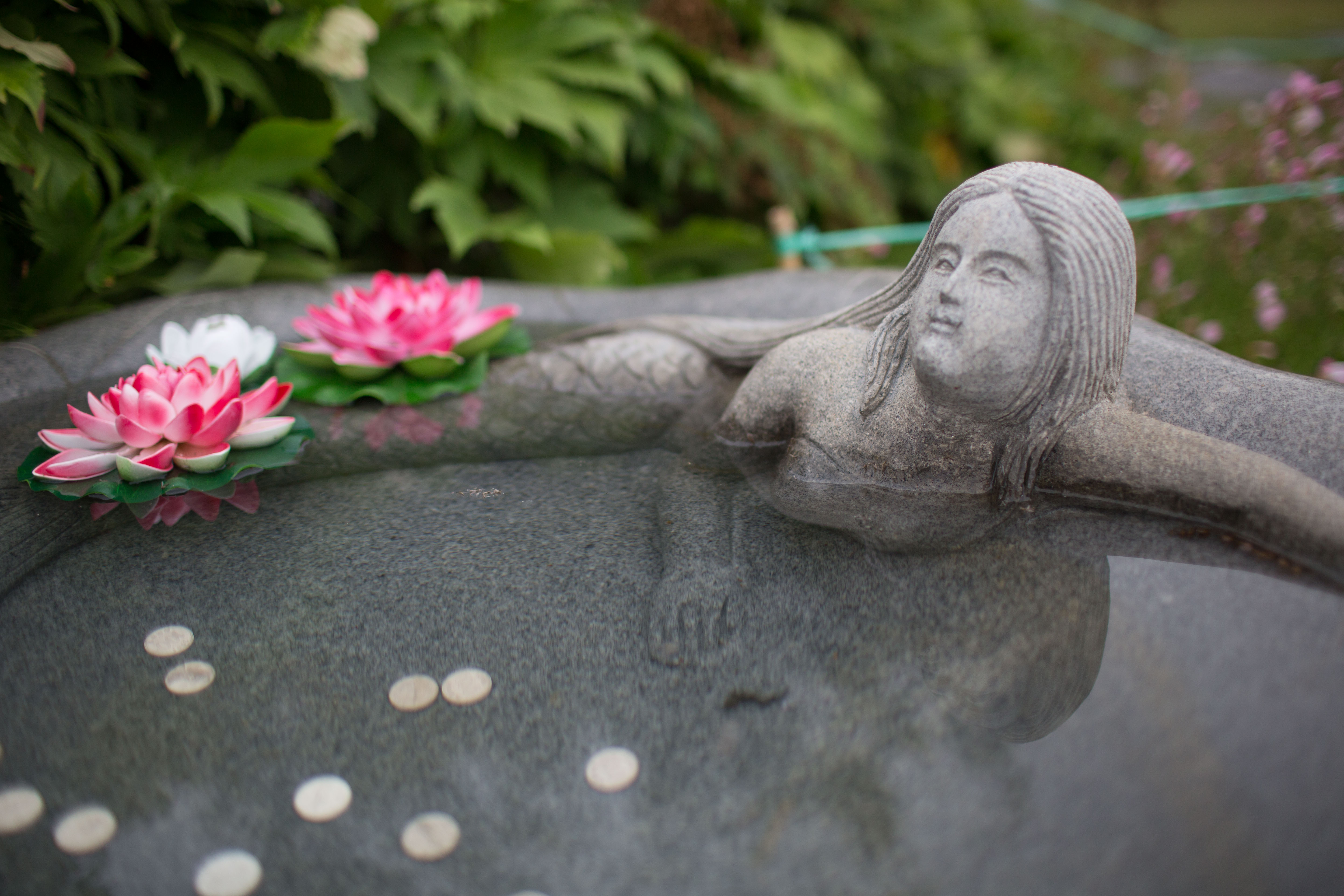 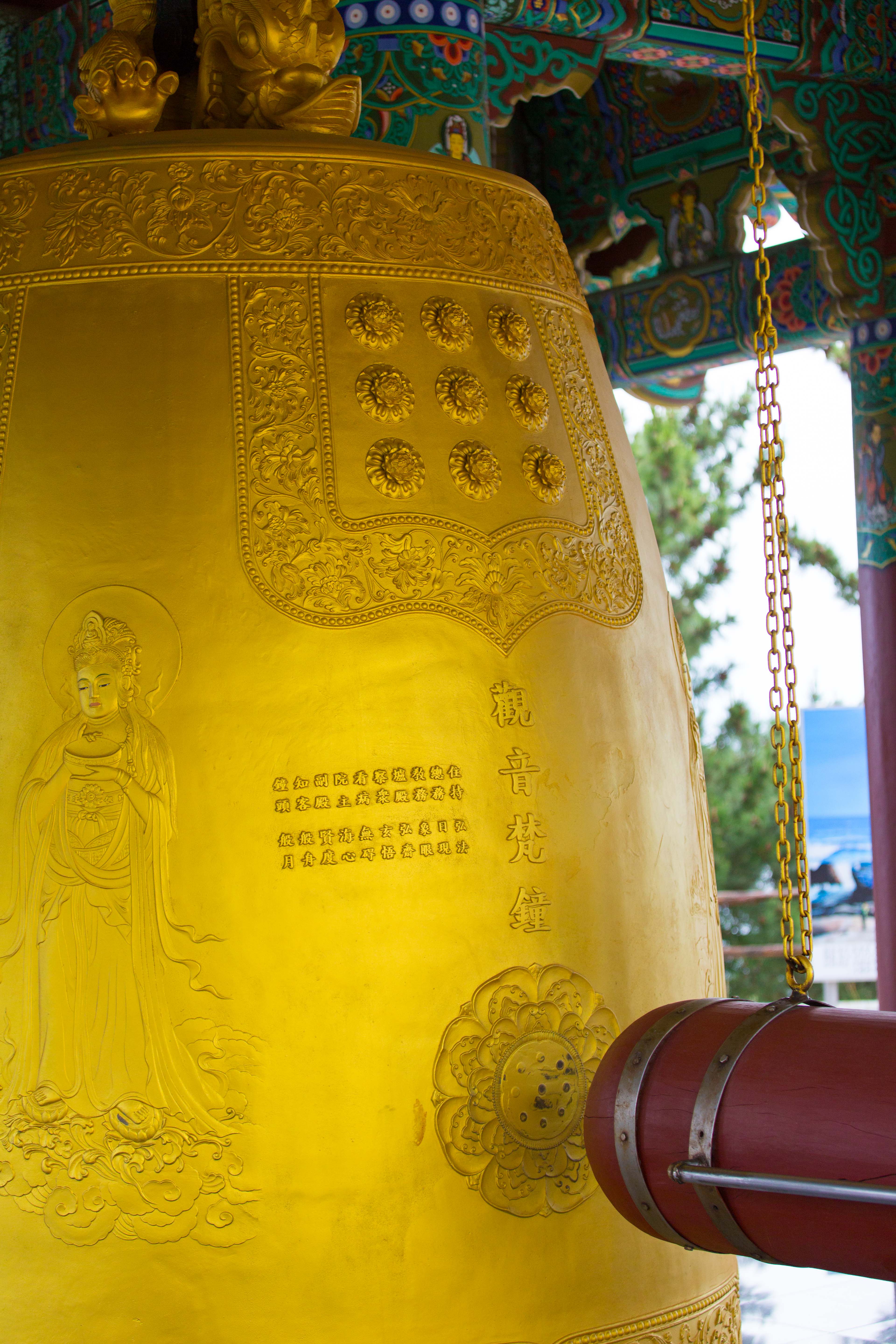 Here is some of the other really nice temple statues. 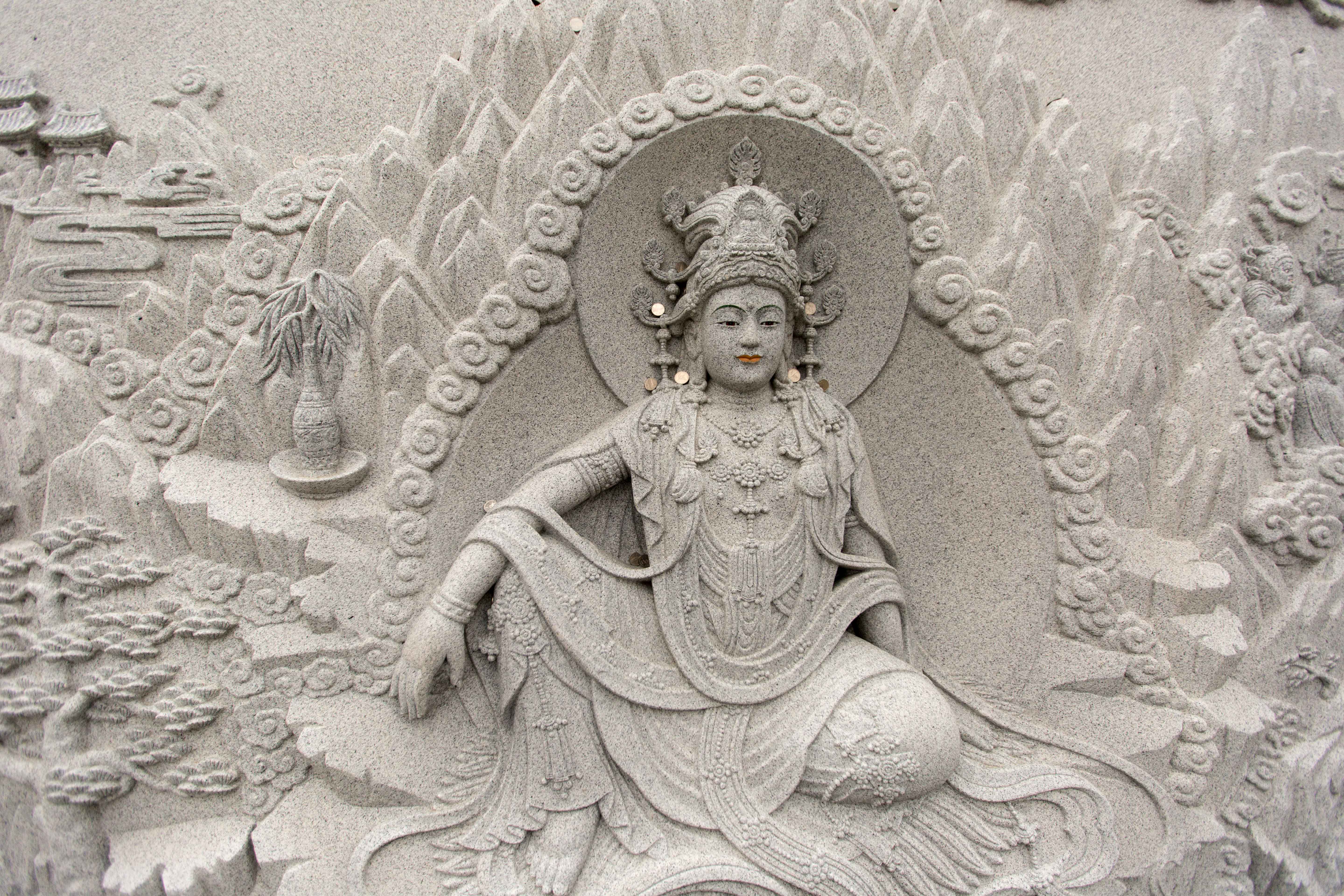 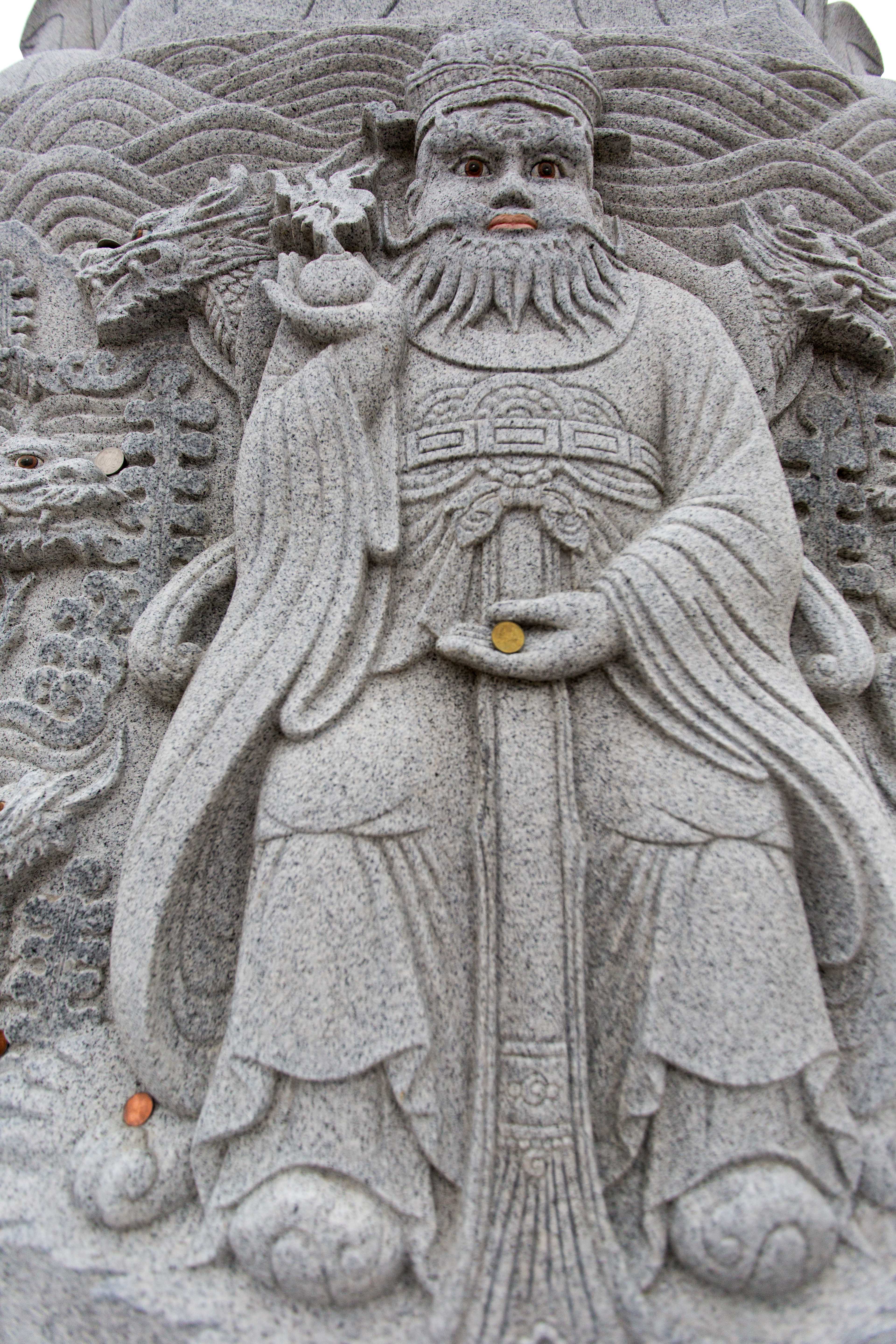 I guess someone decided the gods needed to drink Soju, as they left a couple of bottles as a offering. 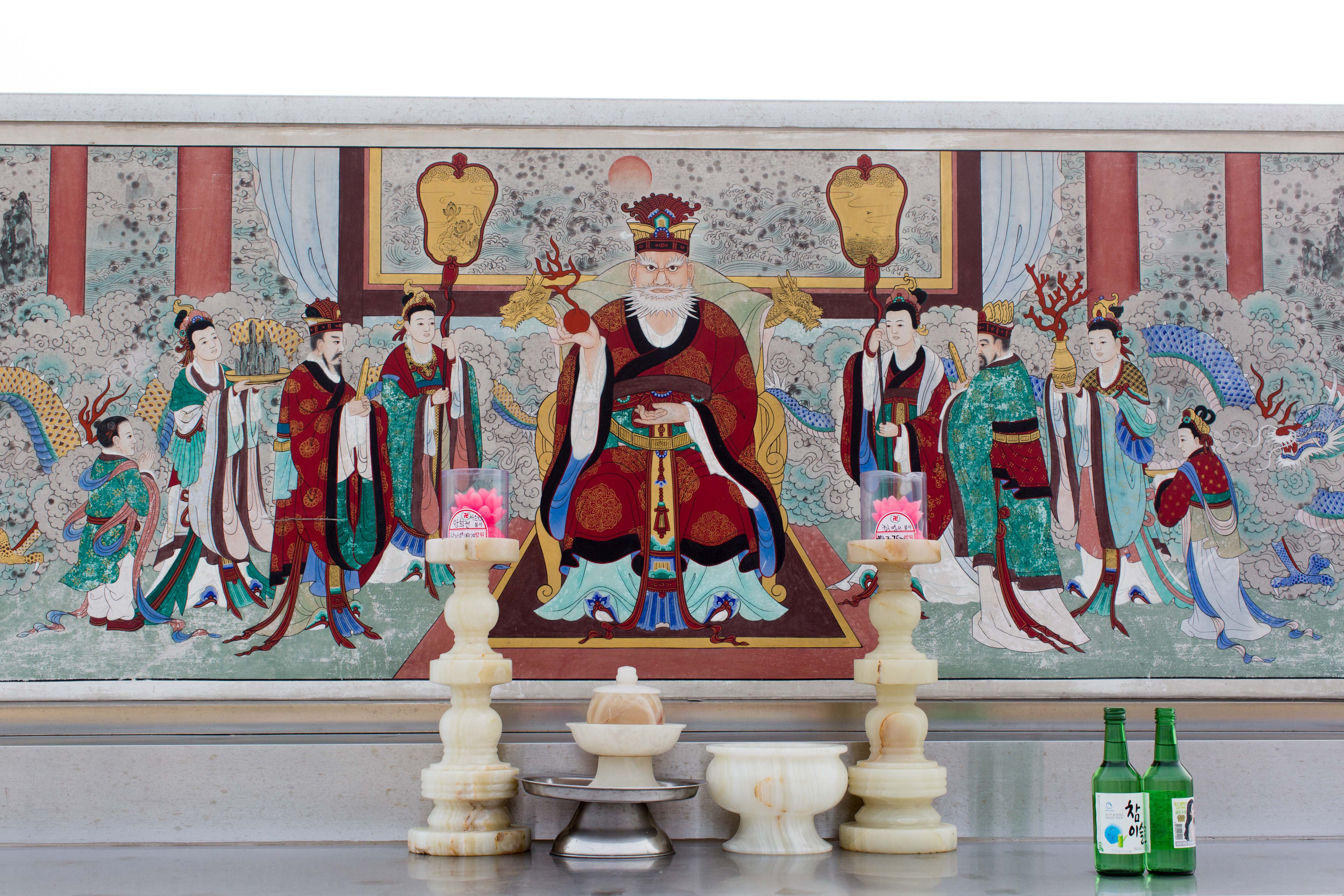 Walking towards the water we find some interesting Mickey Mouse shapes eroded in the rocks, and an area where you can buy fish food to feed to the fish that swim in the shallows. 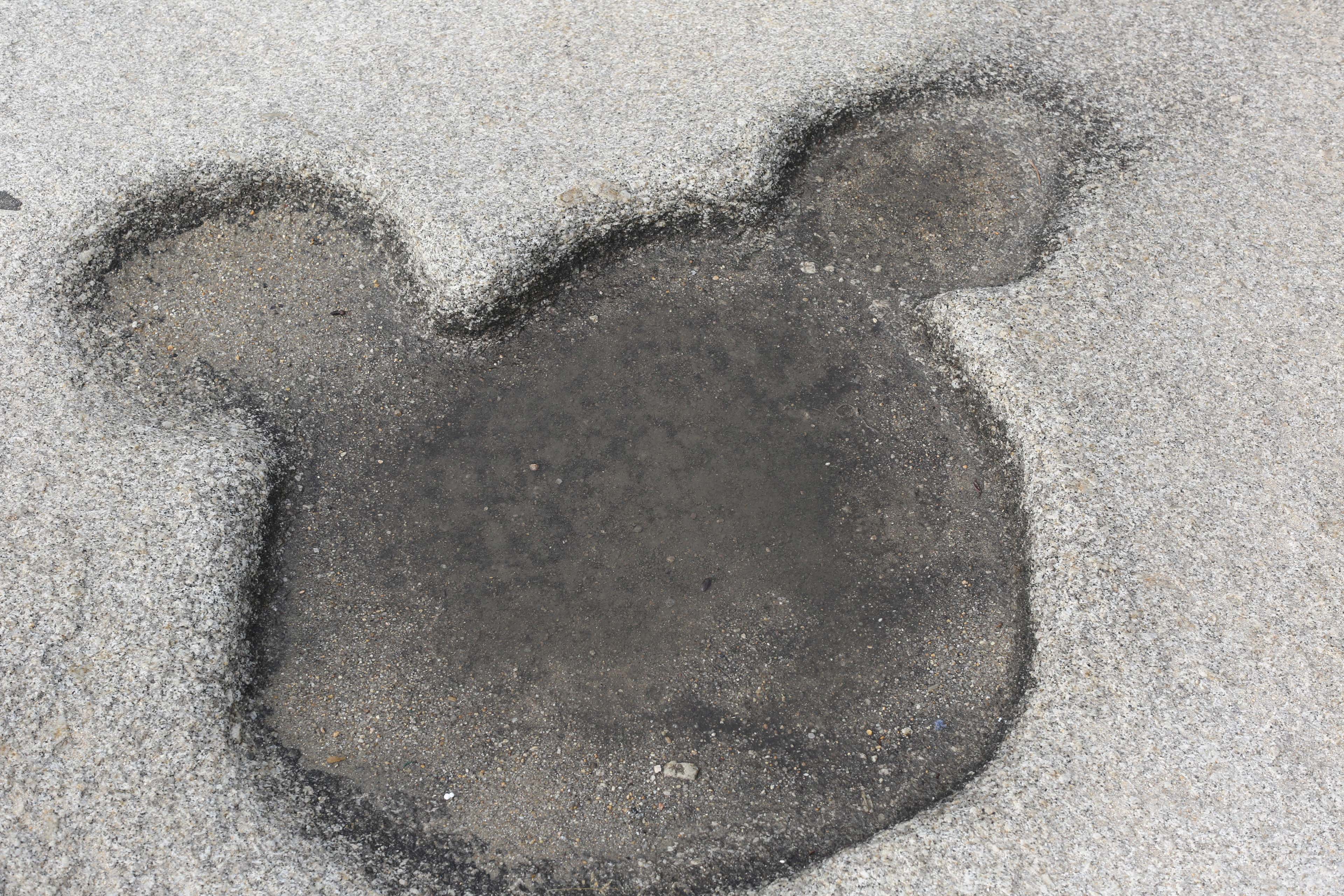 It is very a very good idea to live near a temple, if you are a fish. 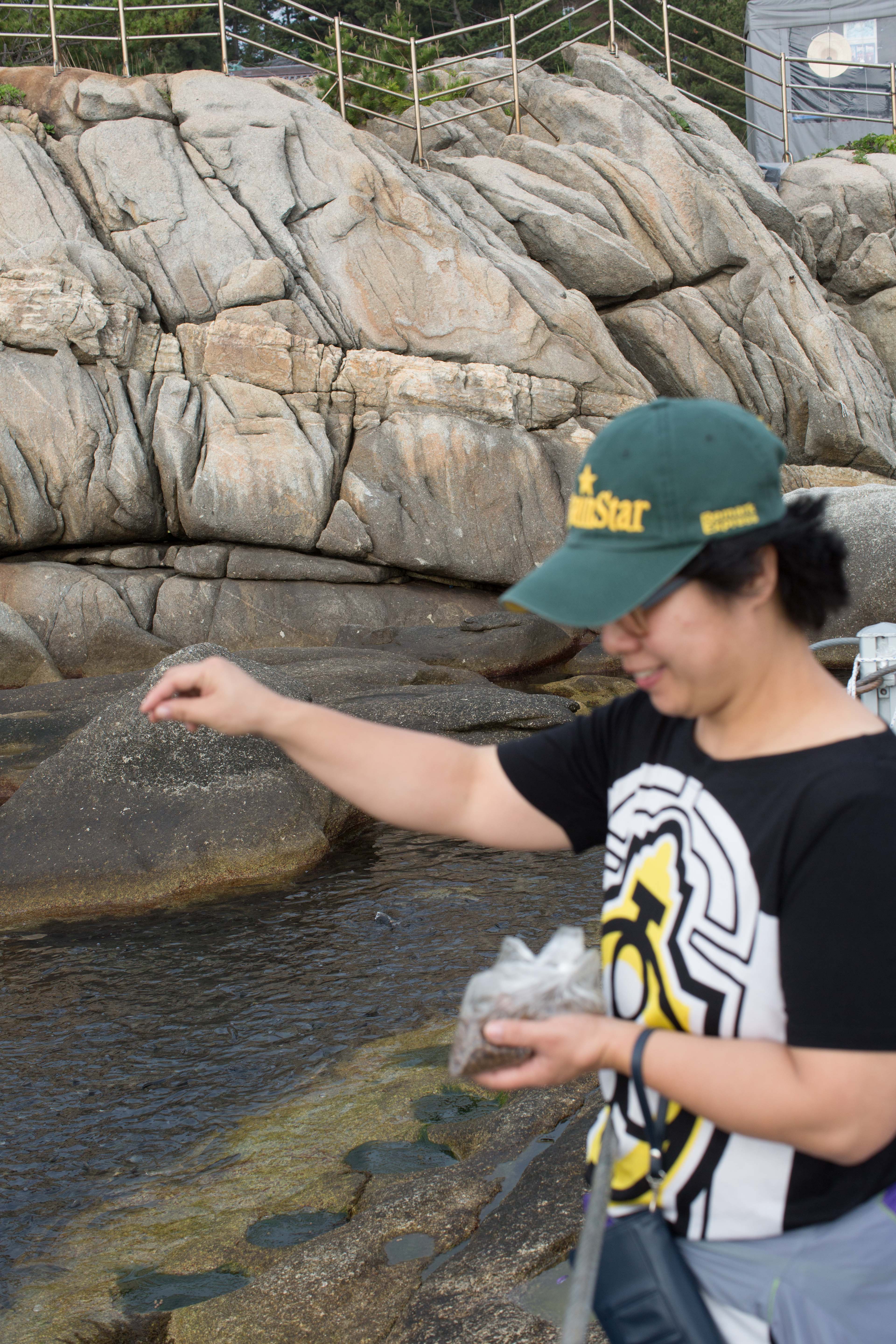 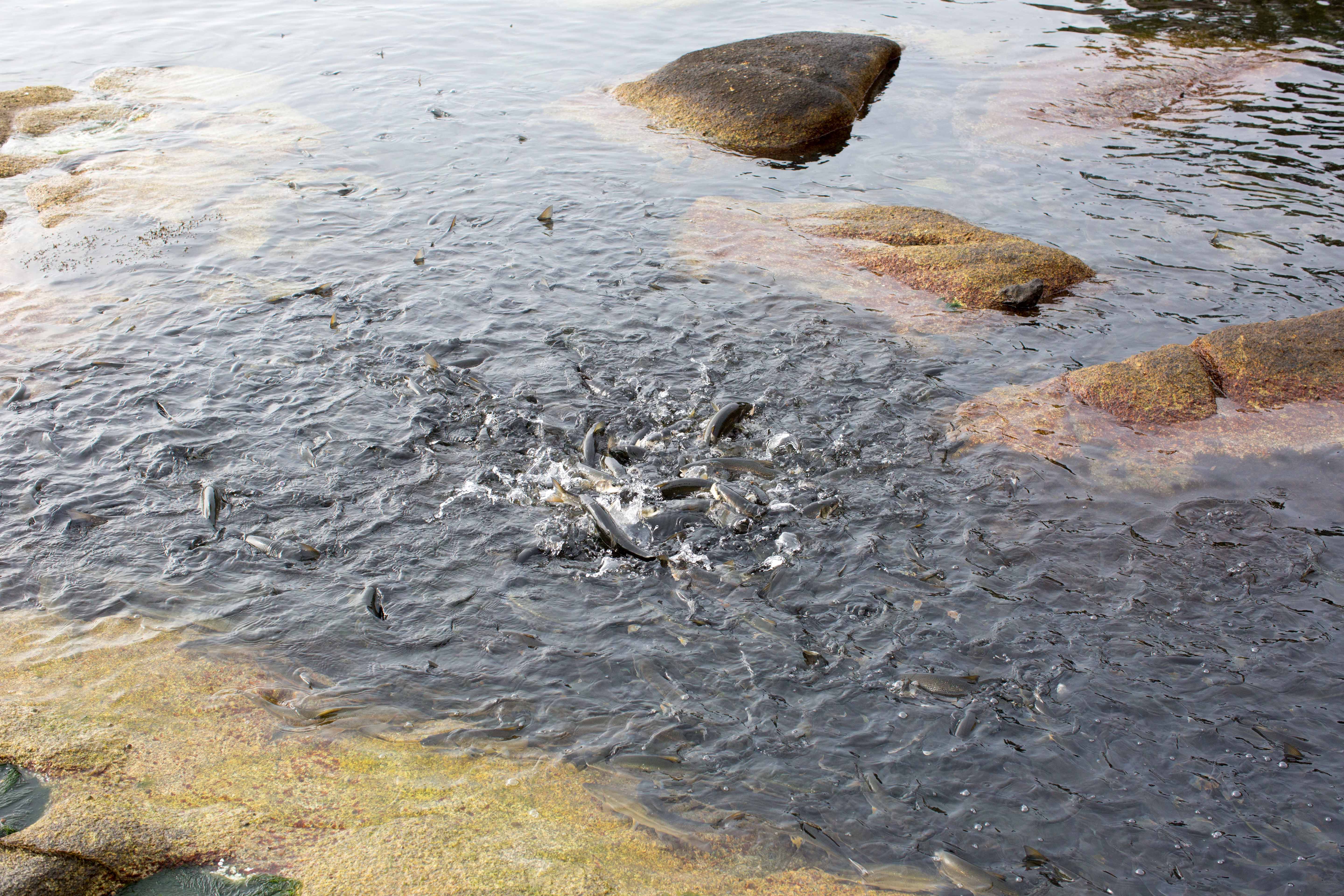 Later in the day we took the bus to Namhangjin and tried the Aranabi “Sea Butterfly” zipline. Which give you the thrill of ziplining over the harbor channel. Here is Mi Jung getting ready to give it a go.

After you cross the channel, which takes about 25 seconds, you cross the street to another tower, and zipline back across. Once again, Here is Mi Jung getting ready to go, and Mi Jung actually on the Zip Line.

Of course after we were done, I had to stay around and play with the camera some more, here is another rider on the zipline. They actually hurried after me, after getting out of their harness wanting copies of their pictures. Once again I need to get some photographers cards made. 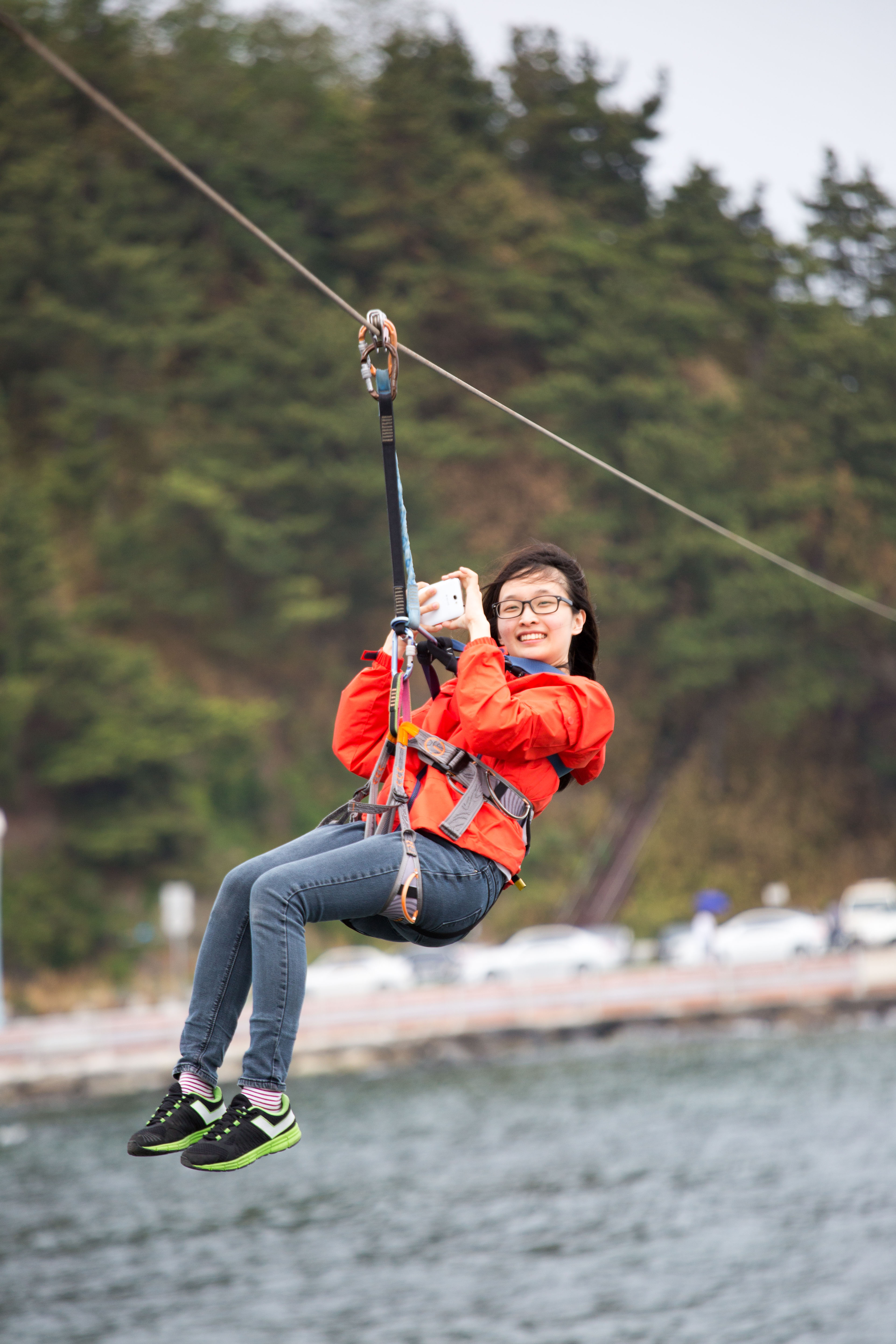 Here is someone who we think had a little too much to drink playing on the swing after we got off. 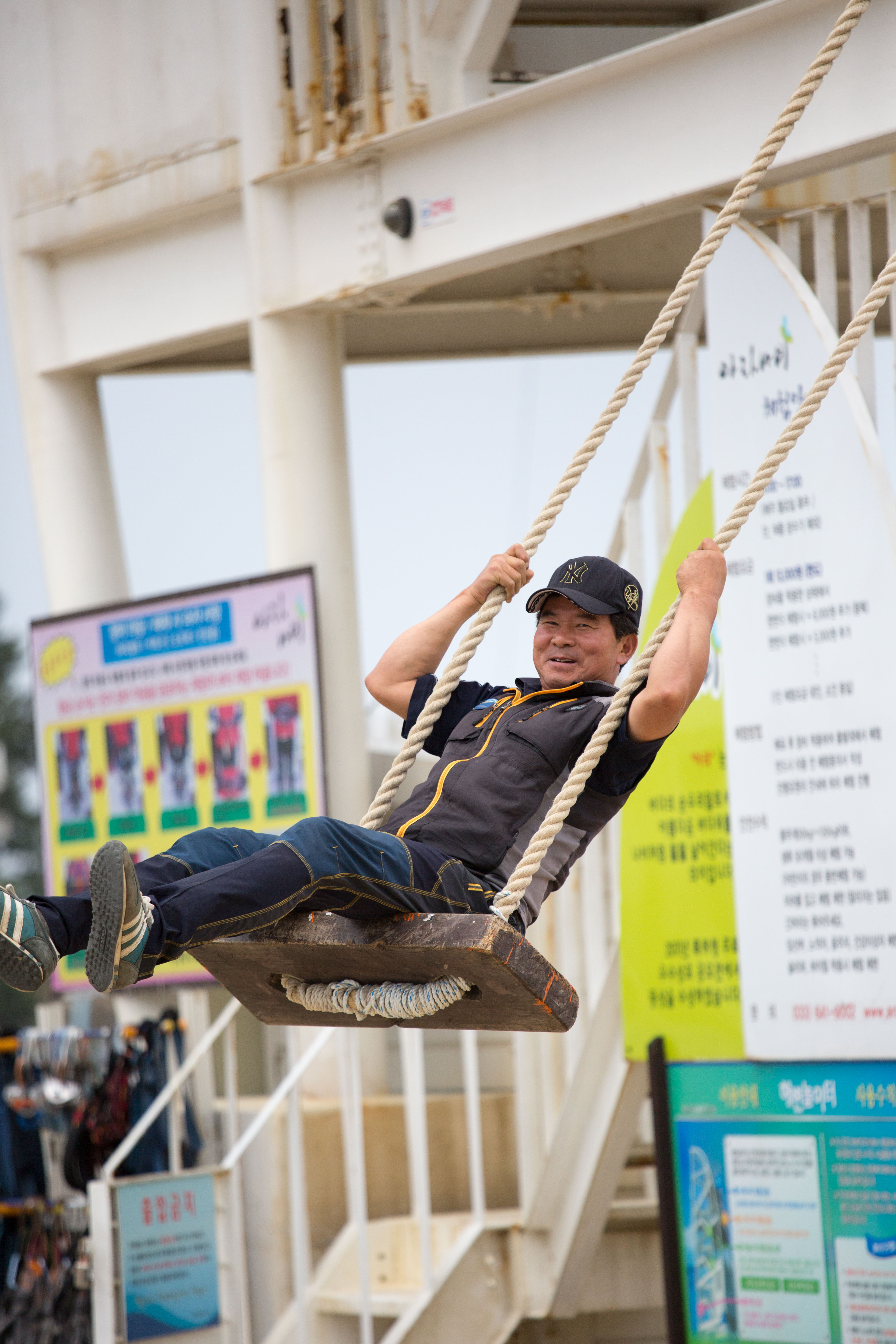 After our 2 hour bus right back to the pension, we rested for a couple of hours, then headed to the roof top BBQ area, and had a birthday dinner consisting of Pasta Salad, Jack Daniels Steak, BBQd corn on the cob, and red wine.

The following morning I woke up early and headed back down to the beach for another photo session. 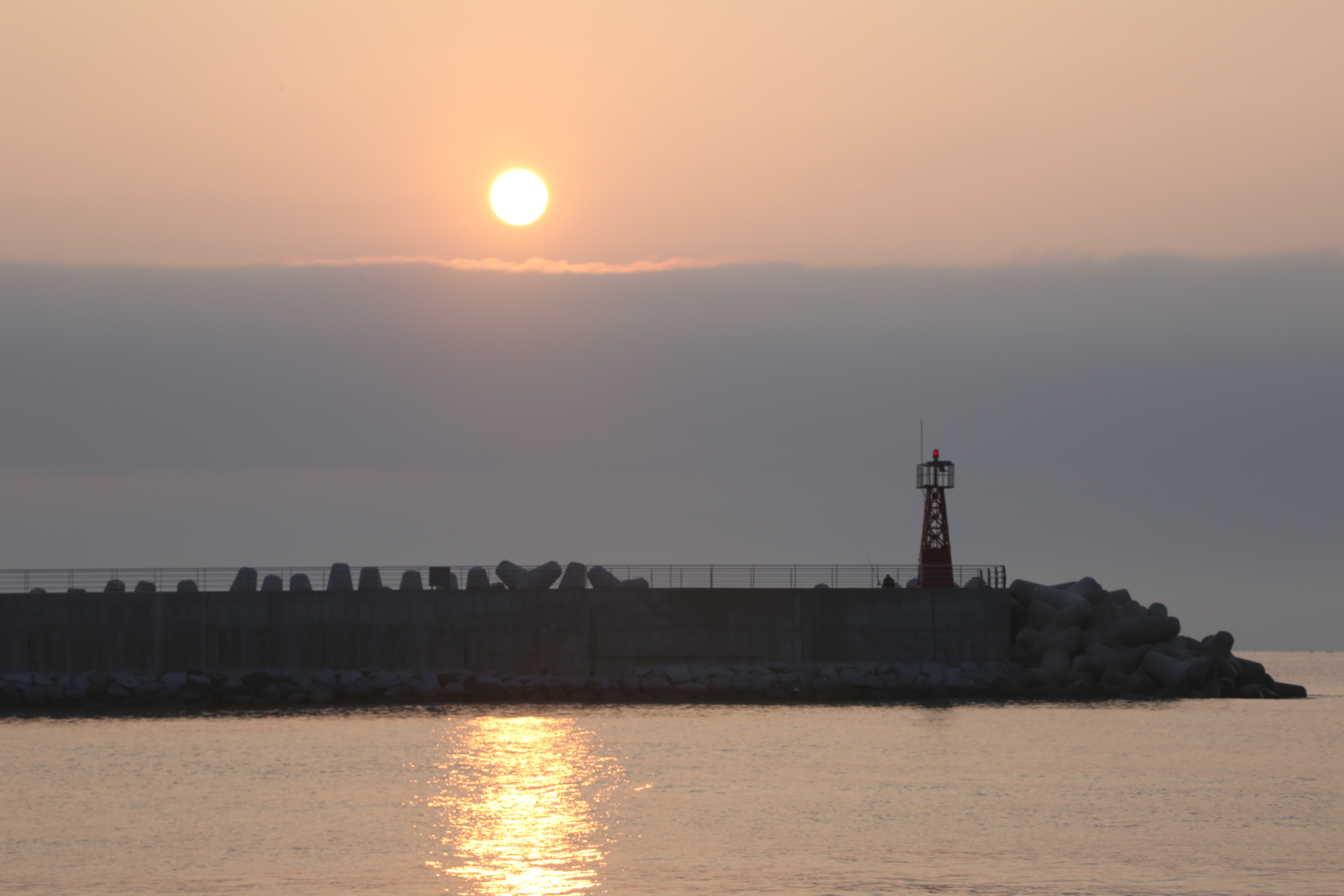 I had a great time walking along the beach, and into the boat / fishing gear yard that was in front of the break water. So many objects to practice photographing.  Showing off my 150 – 600mm Tamron long lens, here is Mi Jung on our balcony at 150mm and again at 600mm. Hi Mi Jung!

Here are some detritus left over from working on the fishing boats, and nets. 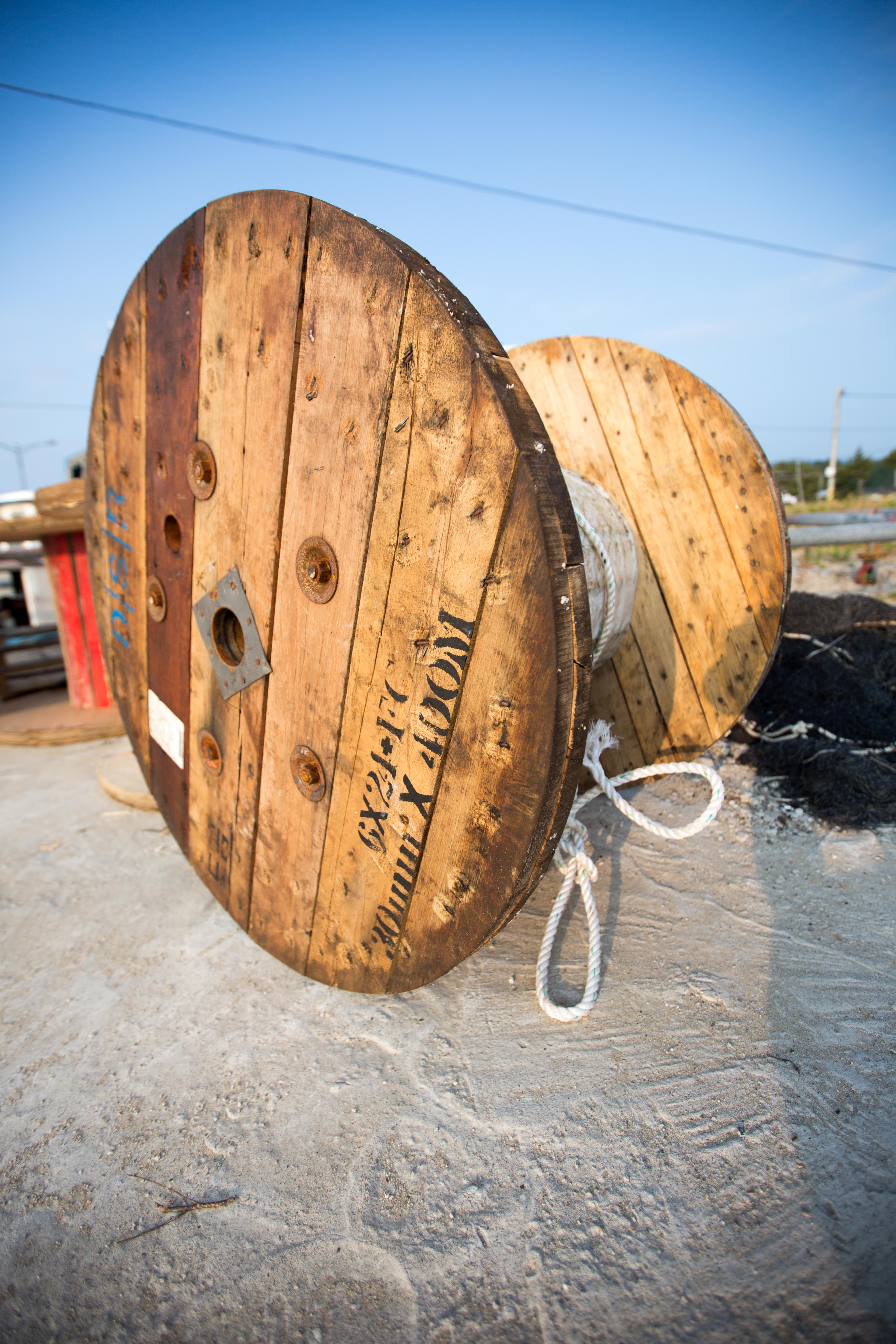 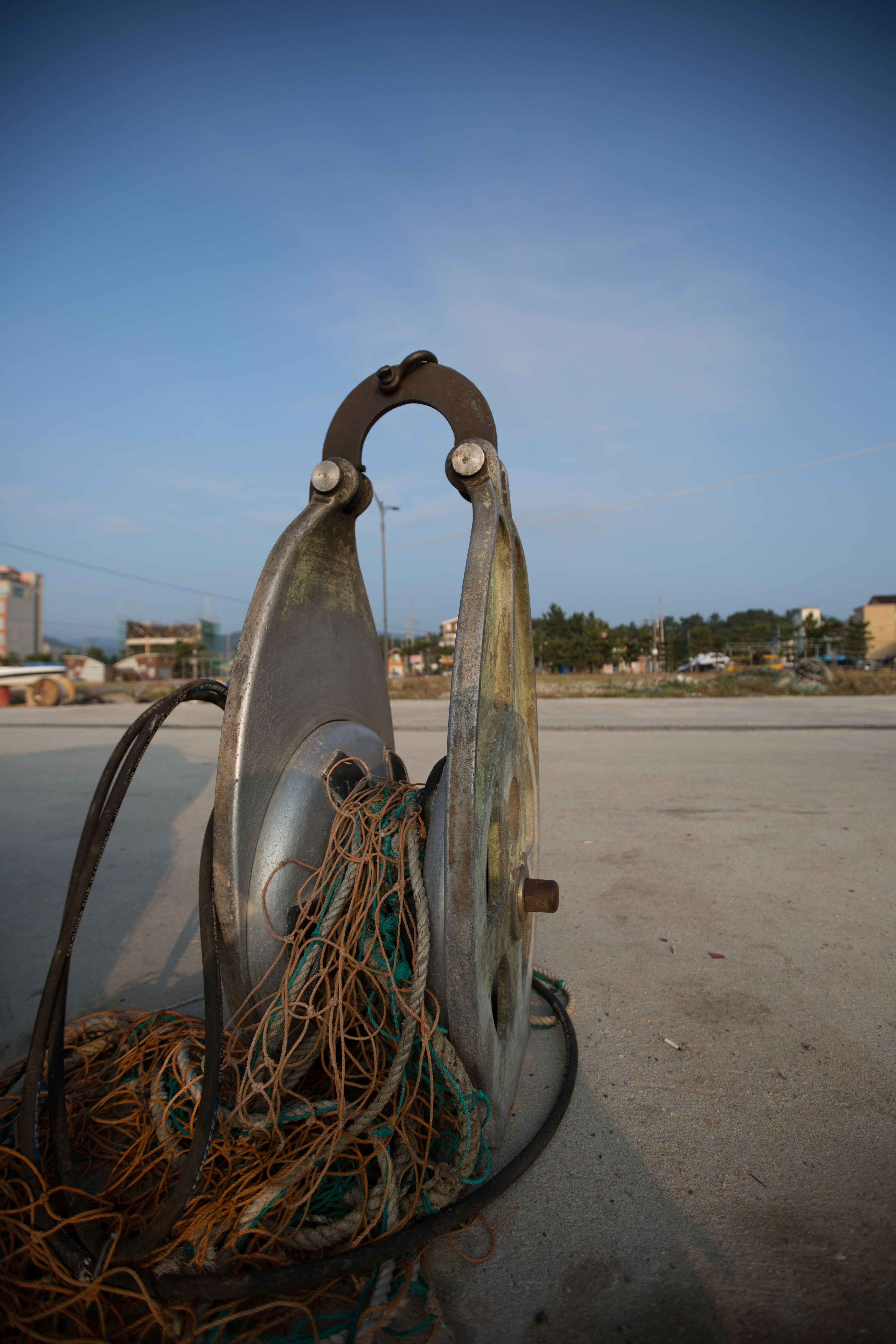 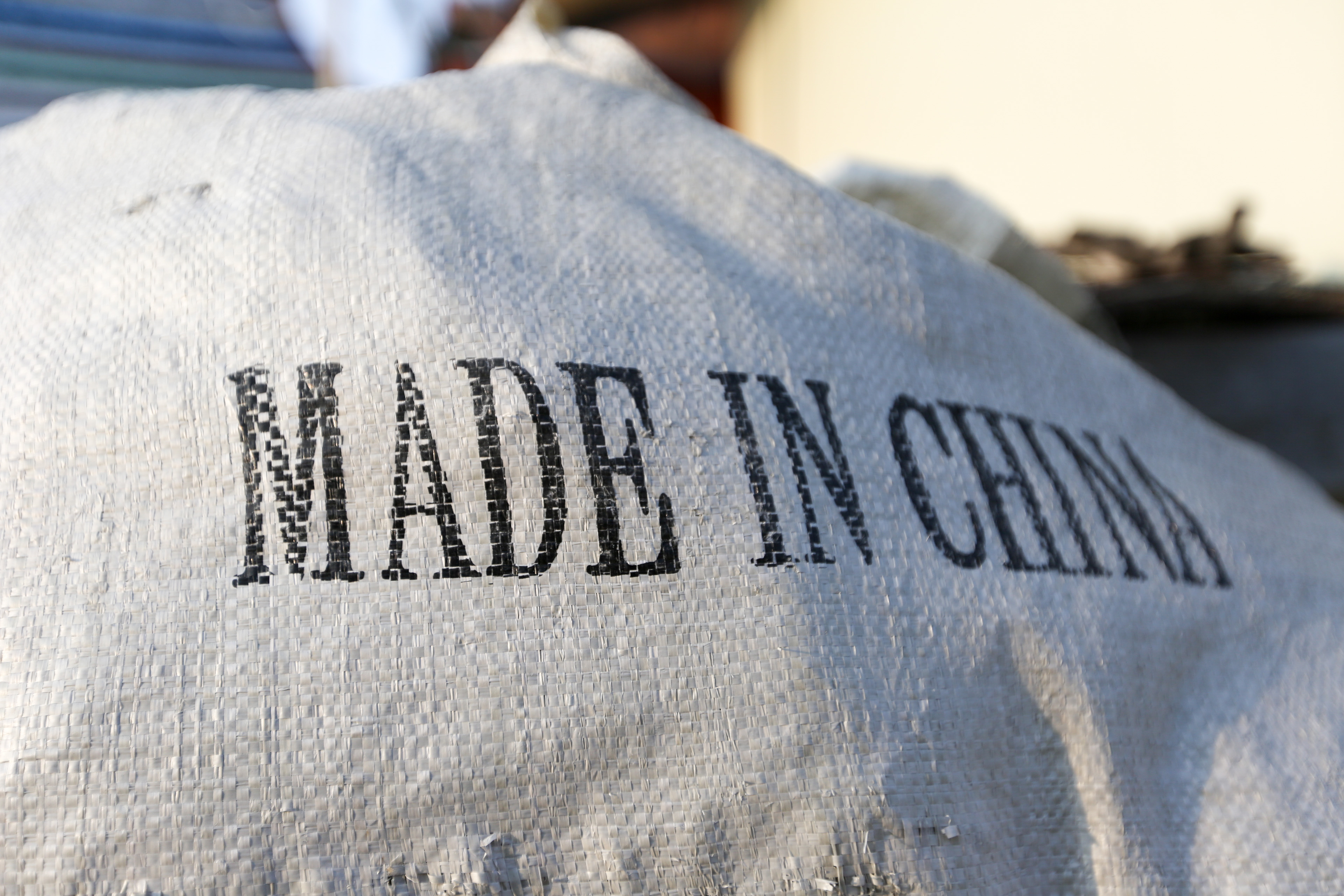 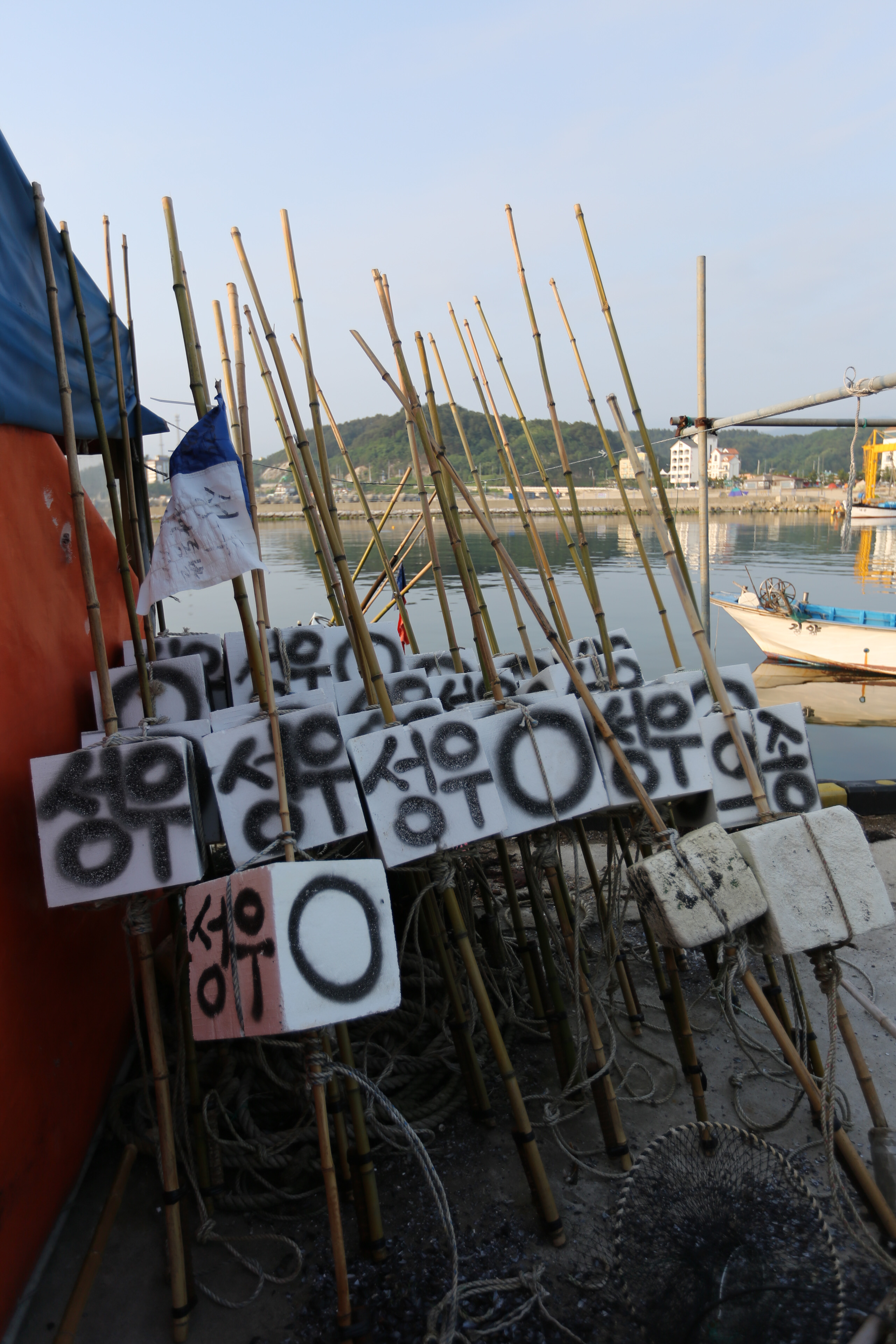 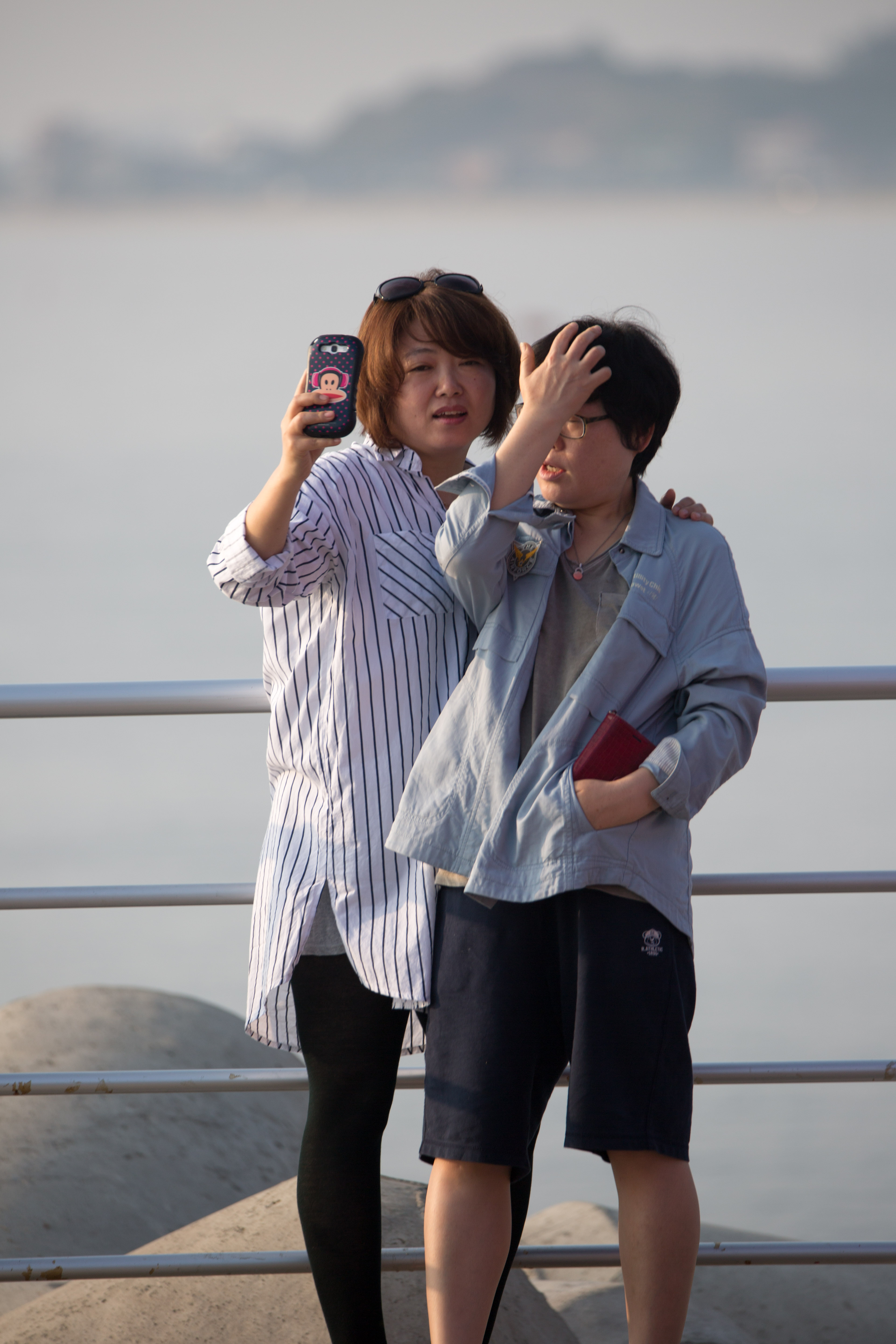 Mi Jung then came down to meet me, and I we walked over to the other temple area, andthen headed into town for another Zipline experience.  The area of Yangyang is known for it’s mushroom farming, specifically Pine Mushrooms. Though some of the artwork can be a little strange. 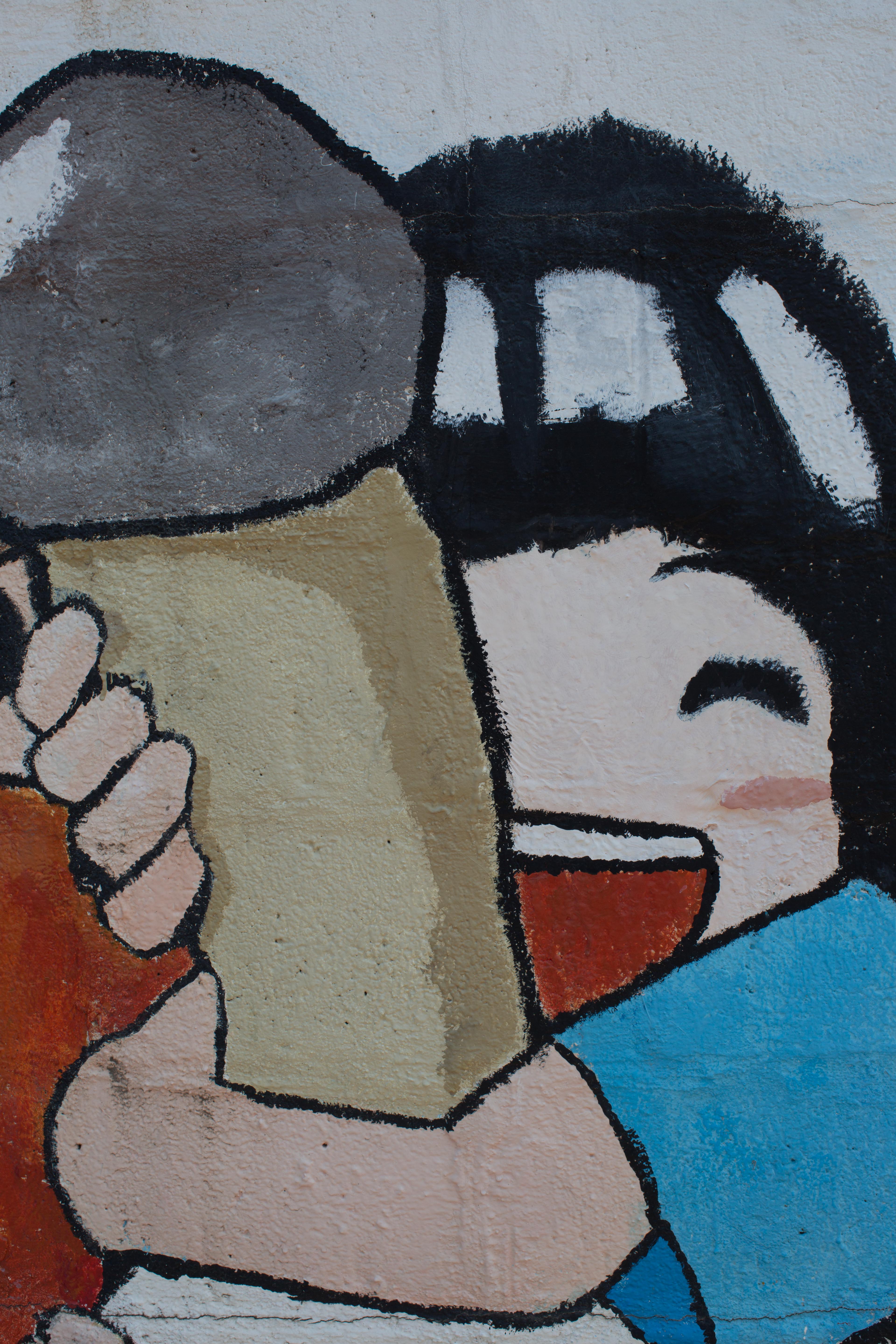 School was just getting out, perhaps this was a test day? 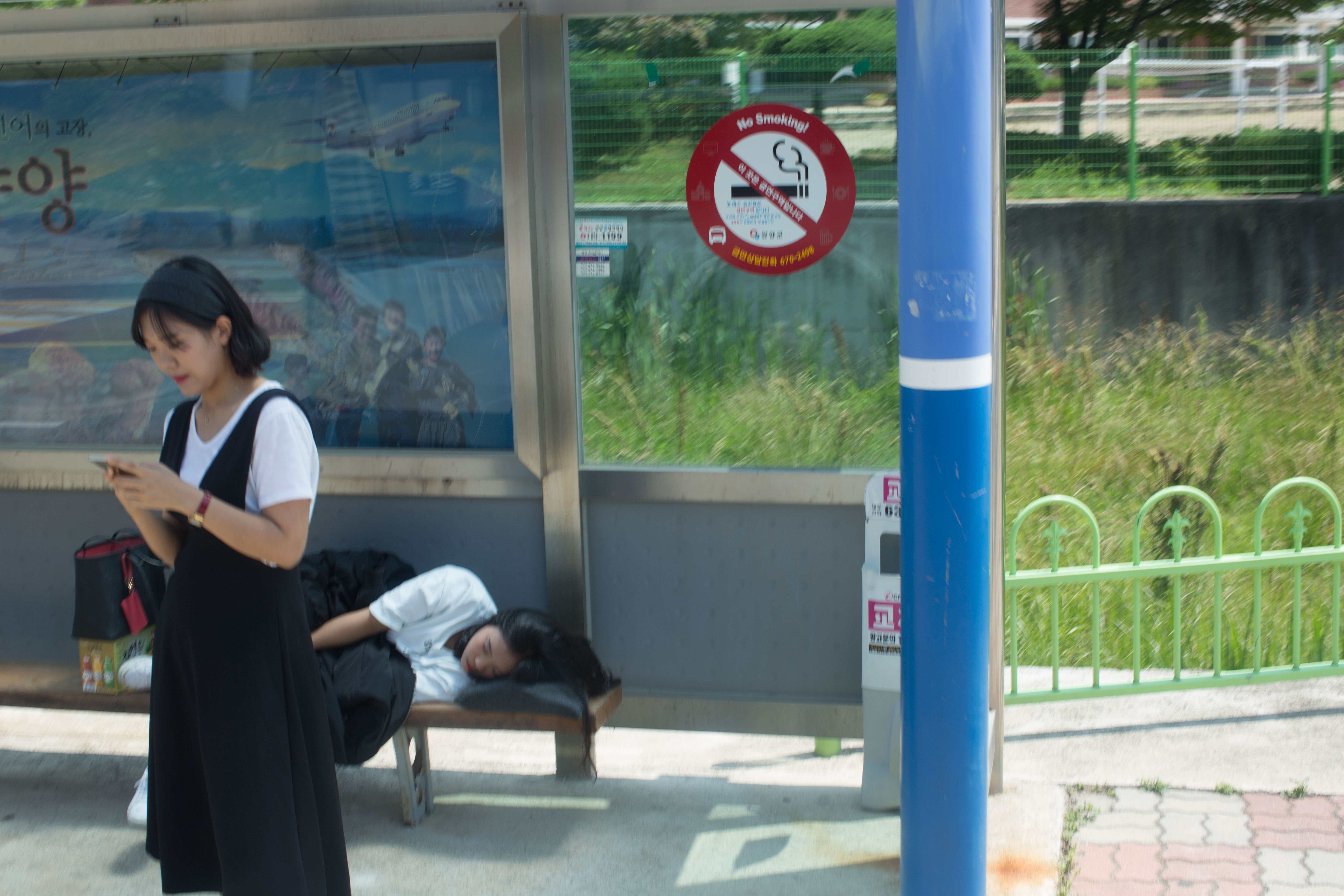 Here we are at the Yang Yang zipline.

I really enjoyed this, the mountain scenery was nice, and the staff super friendly. Here is Mi Jung getting psyched to go. 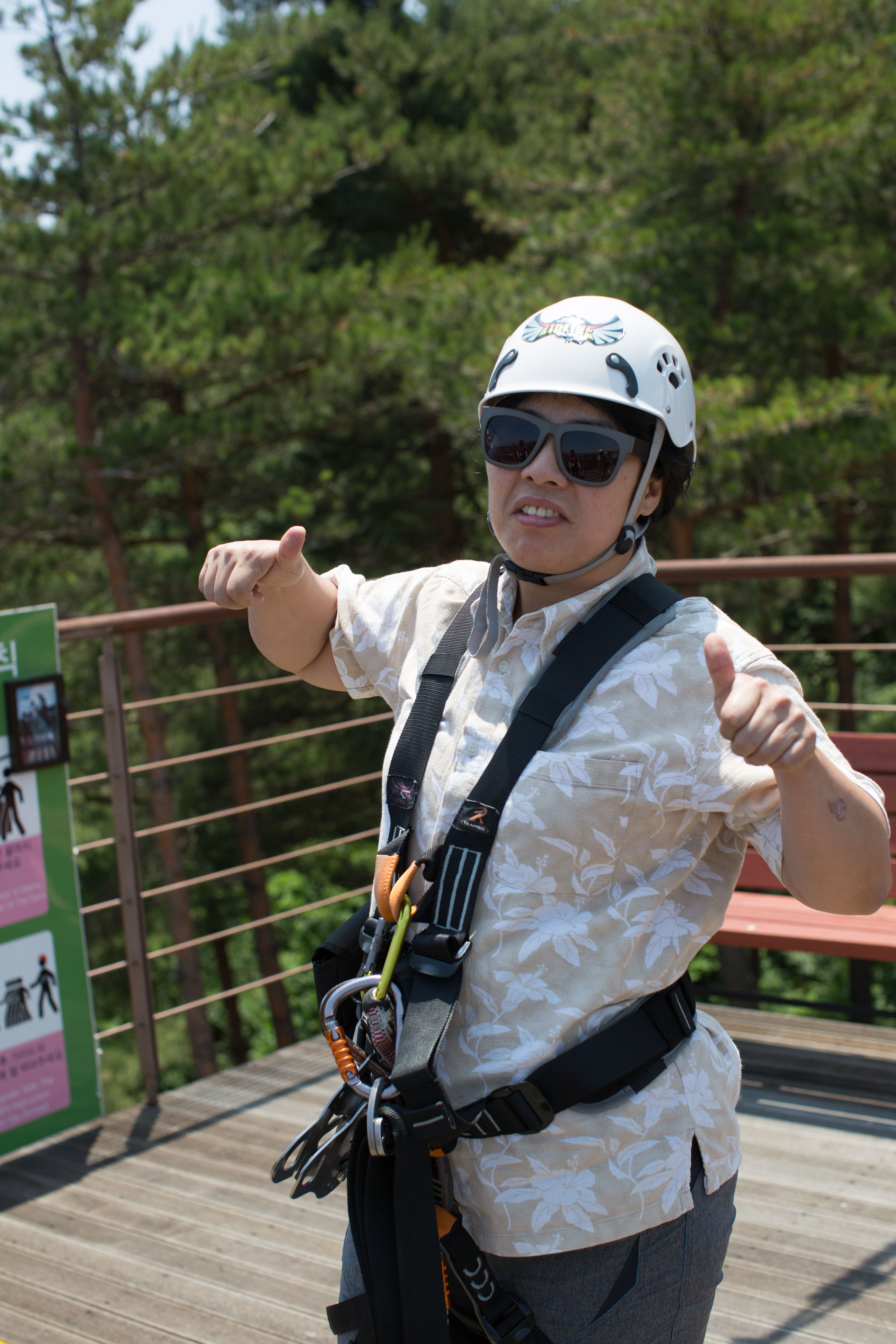 I went first so I could get pictures of Mi Jung actually on the zipline.

We had a great time and I would definitely recommend the Bonita Spa Pension, if you are taking the bus the owners will even pick you up at the bus terminal.

HOW TO GET THERE –
From Seoul:

Go to the Don Seoul Express Bus Terminal
Subway line #2 to Gangbyeon station, Way out #4
It is the large building directly across the street.
Take a bus to Jumunjin